Bolivia’s former president Evo Morales has made a triumphant return to his homeland on Monday after a year in exile in Argentina.

Returning home just a day after Luis Arce, his Movement Towards Socialism (MAS) socialist party candidate and longtime former finance minister, was sworn in as the country’s new president, Mr Morales was accompanied by Alberto Férnandez, Argentina’s leftist president, who has hosted him in Buenos Aires for the past year.

After crossing the border on foot, Mr Morales was met by a jubilant crowd chanting his name, showering him with confetti and waving the rainbow-coloured Wiphala flag of the indigenous people of the Andes.

The two men walked from the Argentine border town of Quiaca to Villazón on the Bolivian side, where “Evo”, as he is almost universally know, was engulfed in a chaotic crowd of supporters, many wearing traditional Andean dress or copper-coloured Bolivian mining helmets. A brass band was wheeled out to salute him.

Wearing a poncho and with a string of earthenware pots hanging around his neck, Mr Morales addressed the crowd and took a typically combative swipe at “North American imperialism”.

The new MAS government has a clear mandate to govern. Probably the most important thing that Evo can do is get out of the way and let them do that

Mr Morales, often described as the most famous Bolivian ever, governed the country for 14 years until last year’s explosive elections, which he claimed he won — a result that would have given him an unconstitutional fourth straight term in office.

The Organization of American States audited the results and said it found widespread evidence of fraud committed by MAS.

Days later, under heavy pressure from the armed forces, Mr Morales resigned and fled. Thousands of his protesters poured on to the streets to demand his reappointment and claim the OAS had fixed the result. At least 30 people were killed in the post-election violence. Some leftwing academics still insist the OAS analysis of the results was flawed.

Since then, the country has been governed on an interim basis by Jeanine Áñez, a rightwing former senator who has persecuted members of the MAS. She relinquished power to Mr Arce following his overwhelming victory in last month’s election.

In a half-hour long acceptance speech in La Paz on Sunday, Mr Arce made no mention of Mr Morales, and some Bolivians have expressed the hope that the new president — a mild-mannered pragmatist — will maintain a healthy distance from his mentor.

“The new MAS government has a clear mandate to govern,” said Jim Schultz, director of the Democracy Center in the US and Bolivia expert. “Probably the most important thing that Evo can do is get out of the way and let them do that, without interference. We will have to wait and see if that is his plan.”

Mr Arce delivered a blistering attack on Ms Áñez in his speech, saying she had failed in her only two responsibilities as interim president: to pacify the country and call new elections quickly. He accused her administration of “mutilating democracy” and waging “a systematic internal war against the people”.

Ms Áñez responded with a curt tweet, saying that “speaking with hatred and resentment is typical of tormented souls”. 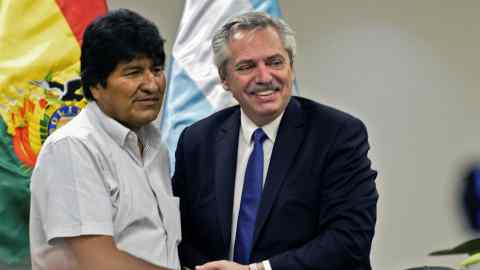 Mr Arce also highlighted the economic failings of the past year, saying they could be blamed only partly on the coronavirus pandemic. After growing at about 4 per cent a year during the first decade of Mr Morales’ rule, Bolivia’s economy started to run out of steam in his later years as prices for its hydrocarbons waned.

Both Mr Morales and Ms Áñez turned to the central bank to finance their governments, reducing foreign reserves by half to about $5.5bn now. Mr Arce said Bolivia’s economy had shrunk over 11 per cent in the past year and the fiscal deficit for 2020 would widen to about 12 per cent of gross domestic product.

Mr Morales is unlikely to face trial in relation to last year’s election and the violence that followed. Under the Áñez government the judiciary charged him with terrorism and terrorist financing, with both offences punishable by up to 20 years in prison. However, as soon as Mr Arce won October’s election, the charges were dropped.

In theory, Mr Morales might face charges of rape now he is back in Bolivia. In August, the justice ministry filed a complaint against him for rape and human trafficking in connection with a girl who was a minor at the time of the alleged offences. A spokesman for the former president described the charges as part of a “dirty war”.