Everyone Is Expecting The Worst (And That’s Good News)

What happens when most investors view the market as being overvalued and expect the worst-case scenario to unfold for equities? Contrarian wisdom suggests that the crowd’s expectation will be disappointed, and in this report, I’ll defend this thesis. I’ll also make the case that the latest worry wave will end in disappointment for the bears as the market’s internal profile confirms that the bull market is still alive and well.

The mainstream media are once again trying to whip up a firestorm of fear over a “second wave” coronavirus outbreak. The latest bit of weakness in the major averages has been widely blamed on coronavirus fears, with new virus cases reportedly “spiking” in some U.S. states and in other countries. While all 50 states have eased restrictions in recent weeks, there are rumblings that in some cities (notably Houston) lockdowns could be re-instituted. But the stock market seems to be emphatically disagreeing with the “second wave” lockdown theory.

It’s my belief that the melt-down in February and March was Mr. Market’s way of pricing in the economic toll of the lockdowns that would soon be mandated by most states. Prior to the market panic, there were several weeks in which stocks making 52-week new lows on both the NYSE and the Nasdaq were in the triple digits, with most of those lows being in the energy sector. Clearly, informed investors were looking ahead to the oil price collapse that would shortly follow the nationwide shutdown as the economy ground to a halt, unloading oil and gas stocks in great numbers. Their prescience was of course confirmed by subsequent events.

If you’re one who believes, as I do, that markets are in fact prescient and forward-looking then you’ll probably agree with me that the market doesn’t seem very concerned over the prospect of another nationwide lockdown. Unlike the weeks prior to the first U.S. coronavirus outbreak, there are virtually no stocks making new lows on either of the major exchanges. In fact, there have been several days recently when there were zero new lows on the Big Board. This strongly implies that internal selling pressure is non-existent right now.

Surely, if the “smart money” crowd foresaw any danger of a new lockdown then they’d be selling stocks in the sectors which are most vulnerable to another economic collapse. Yet they are not. What’s more, new 52-week highs on both exchanges remain at healthy levels – and yet not at levels which suggest a “mania” or blow-off type move is underway.

Here’s what the 4-week rate of change (momentum) of the NYSE new highs and lows looks like as of June 17. This is my favorite way of gauging the market’s near-term path of least resistance, as the new highs and lows reflect the incremental demand for equities. As you can see here, this indicator is rising as new highs significantly outpace new lows (by contrast, it was in decline prior to the coronavirus crash). The message is clear: the bulls remain firmly in control of the near-term trend. 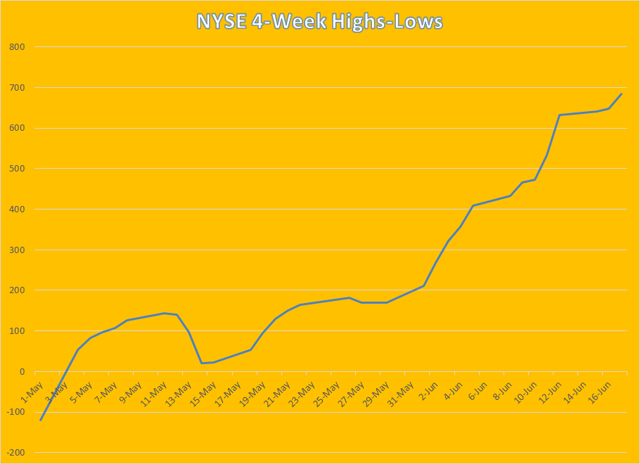 Not everyone is convinced by the market’s strong internal backdrop, however. Fund managers recently cut their cash positions by the greatest amount since August 2009, according to a Bank of America survey. The survey found moreover that:

A whopping 78% of polled investors, the largest number since the survey started in 1998, believe the stock market is overvalued, with 53% calling it a bear market rally.

The contrarian implication of this survey is obvious enough to where further explication is hardly necessary. To wit, too much pessimism is typically a catalyst for additional rallies fueled by rising short interest. The extent to which short interest prevails in the market right now can be ascertained from the following graph, which reveals the client positioning on the S&P 500 (SPX). Currently, only 31% of IG clients are long the S&P 500, while a whopping 69% are bearish. That’s a recipe for a short-covering rally once the latest batch of fears fail to materialize. 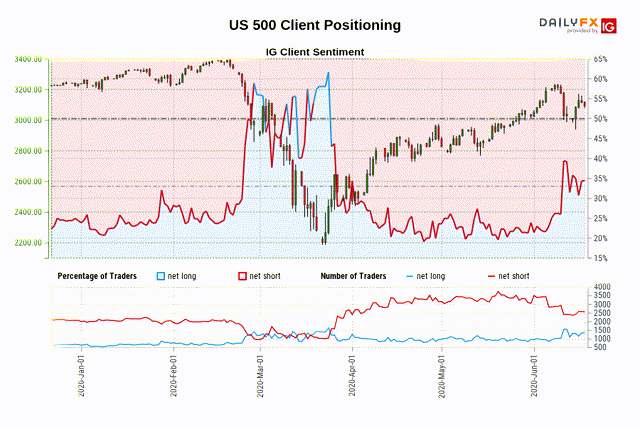 The bears will object that there was plenty of fear to go around immediately prior to the last crash in February, and this is true enough. The difference, however, is that last time the market was vulnerable to a fear-induced selling panic since the market’s internal condition was so weak in February (as reflected by the triple-digit new 52-week lows on both exchanges). But this time around, new lows are virtually non-existent and the market’s internal condition is in far better shape. This makes it more likely that investors’ fears will backfire in the form of a short-covering event at some point in the near future.

This isn’t to say that the market is completely without short-term obstacles. For the fact that volatility as measured by the VIX remains elevated (at 33 as of this writing) – and above its 15-day trend line – is a sign that informed investors aren’t completely convinced the market won’t suffer another panic attack. However, based on how strong the internal condition of the NYSE is right now, any such panic attacks are likely to be brief and shallow compared to the one suffered in March. More importantly, the technical and sentiment-based evidence discussed here suggests that any pullback from here should be considered as a buying opportunity. 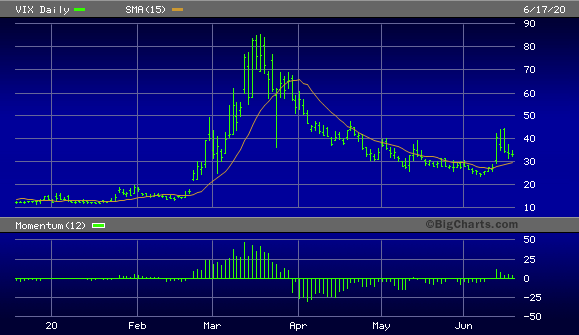 In conclusion, while many participants may be worried about another COVID-19 outbreak, the stock market remains remarkably unfazed and has evidently discounted any such occurrence from ending the new bull market now in play. Moreover, internal selling pressure is absent from the U.S. equity market as measured by the complete dearth of stocks making new 52-week lows on both exchanges. Finally, fund manager pessimism is at levels not seen since prior bear market lows. Accordingly, a bullish intermediate-term (3-6 month) bias toward equities is still warranted in my opinion.