Every Time Is Different | Seeking Alpha

Studying market history is a worthy endeavor for investors. It can provide instructive parallels, much needed context, and reassurance during difficult times that “this too shall pass.”

Problems arise, however, when one assumes that the range of possible outcomes in the future is limited to what has happened in the past.

There is no better example of this than 2020…

Prior to this year, the shortest bear market in US history was just under 2 months.

While there are many theories about what caused the 1987 crash, there was no economic contraction associated with it. With hindsight, many viewed that as a reasonable explanation as to why the Bear Market was the shortest ever.

The S&P 500 peaked on February 19 of this year and proceeded to fall over 35% in a little over a month. At the time, the entire world was on lockdown and the US was said to be facing an economic collapse reminiscent of the Great Depression.

Looking at prior history back on March 23, one would have reasonably assumed that there had to be more downside to come.

But there wasn’t. The S&P 500 started rallying the very next day (March 24) and never looked back. A new shortest bear market in history was born (33 days), with the market back at all-time highs by August.

Prior to this year, the shortest recession in US history was 6 months in duration, back in 1980.

In March and April of this year, fears of a depression were rampant, with many believing the downturn could last years… 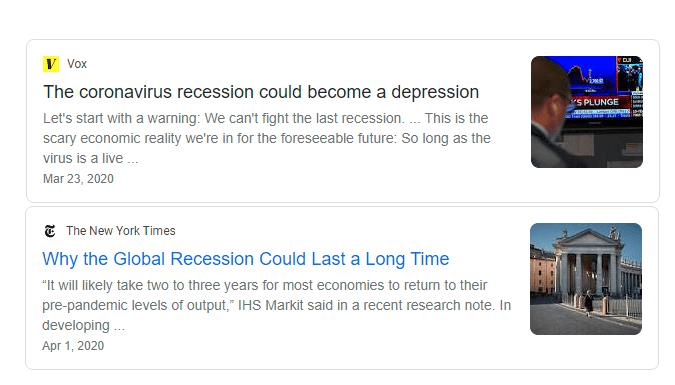 In early May, reports came out that showed the US unemployment rate had hit 14.7%, exceeding all previous post-world war recessions.

Looking at prior history back in early May, one would have reasonably assumed that there had to be more economic weakness to come.

Retail Sales came roaring back in May and hit a new high in June. Since then, the gains have continued.

Incomes dipped in March, but then they spiked higher after enormous stimulus measures. They remain well above pre-pandemic levels today.

The US Unemployment Rate has steadily declined each month since April, now down to 6.9%.

In terms of real GDP, we don’t have 4th quarter numbers yet, but if expectations are correct (see Atlanta Fed projections), new highs will be hit by the end of the year.

What that means is that the 2020 recession, when officially dated, will likely be the shortest in history at just 2 months in duration (March and April).

Every time is different. You haven’t seen this movie before – no one has. Just because something hasn’t happened in the past does not mean it can’t or won’t happen in the future. 2020 has become the embodiment of that principle.