Everest Re: A Silent Compounder With A 3% Dividend Yield (NYSE:RE)

I have been looking at some insurance companies the past few months as it looks like the COVID-19 pandemic is only having a relatively minor impact on those companies. Some indeed had to report a loss on the investment portfolio in the first quarter but given how strong the markets have rebound in the second quarter, most companies will very likely recoup those losses. It has been several years since Everest Re (RE) has gotten some attention here on Seeking Alpha, and I wanted to check in on the company’s progress.

The Q1 result was disappointing, mainly because of investment losses

Just like so many other insurance companies, Everest Re’s performance in the first quarter was pretty disappointing. Although the company’s insurance premium revenue increased rather substantially, Everest also had to deal with higher losses and adjustment expenses while the company also recorded a loss on its investment portfolio. 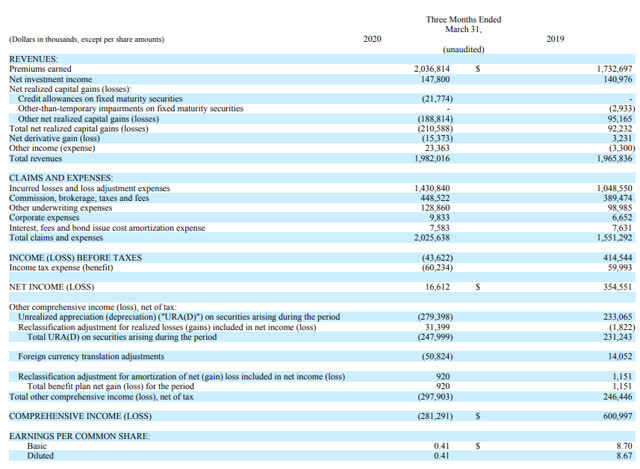 As you can see on the image above, Everest Re reported a pre-tax loss of almost $44M compared to a pre-tax income of almost $415M in Q1 2019. Fortunately the insurance company was able to record a $60.2M tax benefit which is the only reason why the bottom line shows a net income of $16.6M or approximately 41 cents per share. That still is substantially lower than the $8.7 EPS in Q1 2019.

The main reason for the weak performance isn’t just the higher incurred losses (you see an almost 40% increase to $1.43B) which includes a $150M COVID-19 related loss and losses related to the Nashville tornadoes and the Australian storms and fires in Q1 2020.

I admit I was first thrown off by Everest calling those losses ‘net realized losses’ as I would have been surprised to see the company selling securities at huge losses. Upon reading the footnotes of the financial statements it came clear that ‘realized’ losses aren’t ‘realized’ at all. Of the $210M in losses, only $43.7M were incurred when securities were actually sold. The timing to sell those securities obviously wasn’t ideal but Everest Re just had to do so, considering the higher insurance payouts due to COVID-19 in the first quarter.

That being said, the same footnote also confirms $145M of the loss was caused by a fair value re-measurement of the portfolio. This means that although Everest recorded them as ‘net realized’ losses, they aren’t realized at all and we will very likely see Everest reporting an outsized capital gain in Q2 2020. Additionally, the net derivative loss was caused by Everest writing put options on stock indices, and this loss will very likely be reversed in Q2 as well considering the markets have gone up considerably in Q2.

This doesn’t mean Everest Re is out of the woods: we may see a higher impact of COVID-19 related losses than the $150M recorded in Q1, and as the insurance company continues to make its quarterly dividend payments of$1.55 Per share, the dividend plan is costing the company just over $60M per quarter.

That being said, the company’s board (and management) was smart in Q1 when it accelerated the buyback of stock, buying back almost a million shares for $200M while also purchasing $1.7M of its long term debt, recording a capital gain of $0.5M. Both elements mean Everest was able to buy back stock below the book value, while it repurchased the debt at a substantial discount to its par value. A solid move, as the bid on the 2044 senior notes has now increased again to 115% of par value for a YTM of 3.9%.

Although Everest Re will undoubtedly see its results being hit by the COVID-19 pandemic in FY 2020, I am impressed with the company’s ability to execute: it repurchased stock at just $200/share and I hope the company spent its entire remaining share buyback authorization of 0.4M shares during April and May when the share price traded as low as $157/share. Everest is currently trading back up at $220/share, and I expect the book value as of the end of Q2 2020 to come in at around this level.

Everest Re has invested its money in a $16.5B bond exposure and only has $723M in exposure to equity (and during the conference call, Everest’s management confirmed it wanted to further reduce its exposure to equity investments) so the company’s investment policy is relatively conservative.