Eurozone banks rein in lending due to pandemic worries

Banks are pulling back from lending to European businesses and households as they braced themselves for a rise in bad loans due to the economic impact of the pandemic, a European Central Bank survey has shown.

The ECB’s quarterly survey of banks found “a tightening of credit standards on loans to firms in the third quarter of 2020 indicating credit risk considerations due to the coronavirus pandemic”.

Banks told the ECB they expected “credit standards for enterprises to tighten further, reflecting concerns around the recovery as some sectors remain vulnerable as well as uncertainties around the prolongation of fiscal support measures”.

As a consequence, eurozone companies and consumers could find their access to bank credit dries up just as they are hit by tightening government restrictions in response to the recent resurgence in coronavirus infections.

Spanish banks reported the most drastic tightening of their lending standards and the biggest falls in demand for loans among the four biggest eurozone economies in the third quarter, followed by French and Italian banks. Spain has been hit hardest by the spread of the virus.

Frederik Ducrozet, strategist at Pictet Wealth Management, said that while it was difficult to estimate loan demand due to emergency measures, “developments in Spain look worrying”. 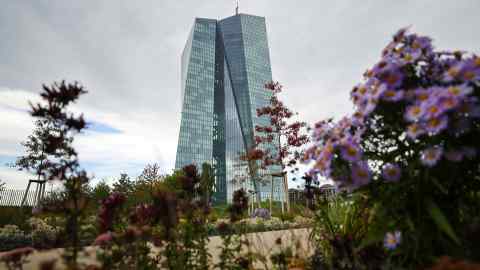 The findings paint a worrying picture for the ECB, which is due to meet virtually on Thursday to discuss monetary policy. Its governing council is expected to keep policy on hold while signalling that more easing is likely in December.

The ECB has estimated that non-performing loans could rise by €1.4tn — almost treble their current levels — in a severe scenario.

“The macroeconomic outlook is uncertain and we cannot rule out a weak recovery with a significant build-up of bad loans,” Andrea Enria, head of supervision at the ECB, wrote in the Financial Times on Tuesday. He called on the EU to consider setting up an “asset management company” — or bad bank — to soak up much of the expected rise in NPLs.

European governments have guaranteed hundreds of billions of euros in loans to struggling businesses, while central banks have flooded the banking system with ultra-cheap loans at negative rates to avoid companies being starved of credit.

However, demand for loans from eurozone businesses declined in the third quarter, “reflecting a decline in emergency liquidity needs relative to the previous quarter”, the ECB said. Demand for mortgages and consumer credit still grew in the quarter, it said, adding: “The rejection rate for loan applications increased across loan categories.”

Separate ECB data showed that the overall money supply increased by 10.4 per cent in September, the highest annual growth rate since the 2008 financial crisis. Loans to companies increased 7.1 per cent, while loans to households grew 3.1 per cent.

Household deposits continued to rise rapidly — a sign of nervousness among consumers — increasing 10.5 per cent, the fastest pace for more than 12 years.