Factories across Europe are buzzing with activity again, encouraging some industrial bosses to invest in extra production as they shrug off the rise in coronavirus infections that is casting a shadow over the continent’s economic recovery.

Many manufacturers adapted production sites quickly to protect their workers after the pandemic hit, and in recent months they have benefited from rising demand, driven by a rebound in exports, particularly to the resurgent Chinese market.

“The coronavirus shock was both a supply and a demand shock at the same time,” said Jörg Zeuner, chief economist of Union Investment, the €370bn German fund manager. “But it is important to understand that a lot of the supply restrictions were lifted over the summer — so manufacturing has been able to get production back to where it was before the lockdowns.”

The resilience of manufacturing has supported the economic rebound in countries with larger industrial sectors. By August, German factory orders had almost reached pre-pandemic levels, while Italian industrial production was already back to last year’s levels.

“We will probably see Italy outperforming Spain, but also France, because it has a bigger manufacturing sector,” said Nadia Gharbi, economist at Pictet Wealth Management. Italy generates almost 17 per cent of income from manufacturing — less than Germany’s 21 per cent but more than France’s 12 per cent and Spain’s 11 per cent, according to the OECD.

“Italy functions best when it is under pressure, if we don’t move, we’re dead,” said Sergio Dompé, head of Milan-based biotechnology company Dompé, which had revenues of about €430m last year. “The system has proven resilient and the fact most companies are small and medium-sized has actually helped navigate Covid-19.”

Economists say manufacturers are likely to remain resilient for at least several more months, helped by a backlog of orders and the recent rebound in global trade.

On Friday, IHS Markit will publish its latest survey of purchasing managers which is expected to show that activity is continuing to increase rapidly across Europe’s manufacturing sector in October, even as the slowdown in services deepens.

“The problem of the services sector, compared to manufacturing, is that it can be very directly affected by the epidemic and by the restrictions on mobility — and if its products don’t find a buyer straight away they can just be lost,” said Gregorio Izquierdo, chief economist of Spain’s CEOE business federation. “By contrast, manufacturing can build up stock and sell to far away markets.”

A key part of Europe’s manufacturing sector is the car industry. While European car sales since the start of this year are still down 29 per cent, they have rebounded strongly — boosted by state subsidies for electric and hybrid vehicles in France and Germany — and in September they grew for the first time since the start of the pandemic.

Ola Kallenius, chief executive of Daimler, said the maker of Mercedes-Benz cars was also enjoying a “remarkable recovery in China” where its sales have grown at double-digit rates for four consecutive months. “It is almost too good to be true,” he said. “They’ve managed a V-shaped recovery in the Chinese economy.”

Companies in other areas are benefiting from rising sales in China such as Gea Group, the German maker of machines that produce half the world’s beer, a quarter of its processed milk and a third of all instant coffee.

“The strongest recovery now is definitely in China, where the virus has virtually gone and I would say people there are back to normal, so that is driving demand,” said Stefan Klebert, chief executive of Gea, which has five Chinese factories.

The Düsseldorf-based company benefits from the resilience of its customers in the food and beverage industries and is pressing ahead with plans to build a new plant in Poland. “One customer may be hit by lower deliveries to fast food companies, but another is benefiting from higher sales of frozen pizzas to supermarkets,” said Mr Klebert. “It all evens out.”

In other sectors, a rebound in domestic demand has offset lower exports, such as the Italian ceramics industry. “Companies that have strong online channels and wholesales channels are faring well, especially thanks to the rebound of the Italian domestic market,” said Giovanni Savorani, chief executive of Gigacer and president of the national ceramics manufacturers trade association. 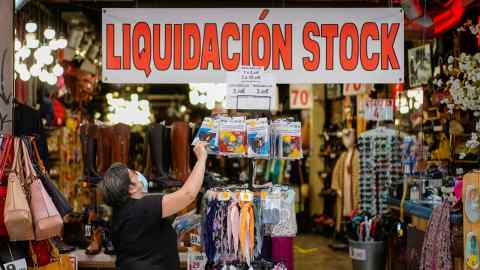 The overall performance of European manufacturing is patchy, however. Some sectors are still struggling. Aerospace, for example, has been hit by turmoil in the pandemic-stricken airline industry. Airbus plans to shed 15,000 jobs while cutting production by 40 per cent — leaving some of its suppliers scrambling to survive.

Equally, Italian fashion industry suppliers, which enjoyed a steady 2-3 per cent yearly growth over the past five years, have suddenly lost more than 40 per cent of orders this year. Apparel, leather, shoe and accessories manufacturers, including large Italian fashion houses such as Prada and Armani, will have to cope with a €27bn loss of revenue this year and €12bn next year, according to an analysis by Cerved.

Companies in historic fashion districts — such as Lake Como, home to Italy’s main silk and textile manufacturers, and the Marche region, where brands like Tod’s and Poltrona Frau are based — fear the Covid crisis will be their last straw.

But what worries industry bosses even more is the possibility that the recent rise in coronavirus infections pushes governments to reintroduce strict national lockdowns.

“Many companies, including healthy companies, would not survive a second lockdown,” said Klaus Fischer, owner of Fischer Group, a maker of wall plugs and car parts based near Stuttgart. “I hope politicians will be smart enough to try everything to prevent a second lockdown.”