It was an “infinitely painful” result, said Herbert Kickl, a leader of Austria’s rightwing populist Freedom party, the FPÖ. “Any attempt to gloss it over is doomed to failure.”

Mr Kickl was speaking after Sunday’s municipal elections in Vienna that saw the FPÖ’s share of the vote collapse from 31 to 9 per cent. “This time it wasn’t other parties that defeated us: the FPÖ did our opponents’ work for them,” he told supporters.

The FPÖ is emblematic of a broader trend. Across Europe, far-right populist parties that once seemed unstoppable are stumbling, riven by infighting and challenged by upstart rivals. They have watched in impotent fury as the coronavirus pandemic has boosted governing parties such as Angela Merkel’s Christian Democratic Union and incumbent leaders such as Giuseppe Conte in Italy, pushing them to the political margins.

Matteo Salvini, leader of Italy’s anti-immigration League party, exemplifies the populists’ difficulties. He has been unable to dominate the domestic political agenda the way he used to before the pandemic and is leaking support to a rival rightwing party, Giorgia Meloni’s Brothers of Italy.

“People vote for populists when things are going well . . . but, when things get serious, they vote for parties they can trust, that will get them through the crisis,” said Armin Laschet, the CDU leader of North Rhine-Westphalia, Germany’s most populous state. “That’s one of the reasons why the CDU is on 35 per cent.”

Nowhere has the populists’ decline been more striking than in Germany, where the rightwing Alternative for Germany (AfD) has descended into civil war. Last month, Germans witnessed the bizarre spectacle of two AfD parliamentary groups in effect imploding, in circumstances that highlighted the stark ideological divisions tearing the party apart.

The AfD regional branches in both Lower Saxony and Schleswig-Holstein have long been split between hardliners and moderates. But the internal tensions climaxed in September when moderates quit the AfD parliamentary groups in both states. They were then forced to disband because they lacked the statutory minimum of MPs, and AfD lawmakers suddenly found themselves stripped of their privileges.

Dana Guth is one of the defectors in Lower Saxony. “The AfD must finally decide what ideological direction it wants to take,” she told the Financial Times, “because these constant power struggles between the opposing camps are paralysing the whole party.”

Latest polls put the AfD at 9 per cent, down from 13 per cent at the last national election in 2017, when it emerged as the biggest opposition party in the Bundestag. Kai Arzheimer, a political scientist at Mainz university, said the internecine feuding had turned off voters, “as has the realisation of how many extremists there are in the AfD and how many ties there are between [them] and the classic far-right movement in Germany”.

Beyond the power struggles and scandals, another decisive factor in the decline of rightwing populism is the diminishing importance of immigration among voters’ concerns. That is in stark contrast to 2015, when hundreds of thousands of refugees from the Middle East and north Africa sought asylum in Europe, sparking a nativist backlash.

The last municipal elections in Vienna in 2015 had been like “Christmas, Easter and a birthday all at once for the FPÖ”, said Thomas Hofer, a prominent Austrian political analyst. “It was the height of the migration crisis, you had widespread disenchantment with the existing grand coalition of moderate parties and a very successful political operation in action.”

Then came the FPÖ’s annus mirabilis in 2017, when it joined Sebastian Kurz’s government as a junior partner and took control of a host of critical ministries. 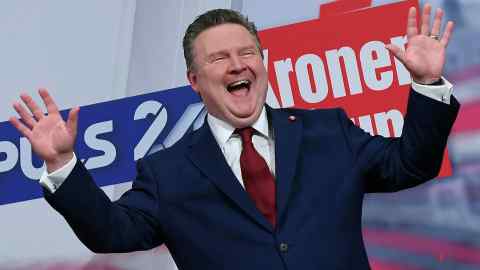 But the party’s fall from grace was precipitous. In May last year a covertly filmed video appeared to show its leader, Heinz-Christian Strache, soliciting political funding in exchange for government contracts. Mr Kurz called time on the coalition and in elections last September the Freedom Party saw its share of the vote shrink.

Mr Strache broke with the party this year and joined a new grouping called Team HC Strache, which garnered just 4.3 per cent in the Vienna election. It was not enough to make it into the Vienna legislature but it succeeded in peeling away votes from the FPÖ.

It is a similar situation in Italy, where Brothers of Italy has destroyed Mr Salvini’s aura of invincibility and threatened the League’s monopoly over the Italian right. Though her party has roots in Italy’s postwar neo-Fascist movement, Ms Meloni has projected a more moderate and serious image during the coronavirus crisis than the bombastic Mr Salvini and has started to gain significant ground in the centre of Italy.

Mr Salvini’s League remains the single most popular party in Italy but his once unstoppable political momentum has slowed. At the height of the pandemic his daily social media tirades against illegal migration fell flat as the country’s attention shifted to the health crisis. His criticisms of Mr Conte have consistently failed to land.

To be sure, there are plenty of European rightwing populist parties that continue to poll well. According to opinion surveys, Marine Le Pen, leader of the Rassemblement National, is likely to face Emmanuel Macron in the second round of voting for the French presidency in 2022: she continues to benefit from the disarray among Mr Macron’s other political opponents on both left and right.

And in Spain, the far-right Vox is still a key player in the political debate, less than a year after establishing itself as the third main force in parliament with 15 per cent of the vote.

Prof Arzheimer of Mainz university said the splits in the populist camp in Italy and Austria disguise an important fact. “The overall support among voters for the rightwing has not diminished,” he said. “It is just being spread among a larger number of actors.”

For that reason, he said, “to talk about the end of populism might be somewhat premature”.