Europe is sometimes — often, even — chided for its slow decision-making, which is seen by many as a product of being a “Club of 27” and the need to gain consensus for coordinated action.

But a recent FT article describes an impressively fast response to Europe’s realization that it is being left behind in the lithium battery industry and, by extension, the wider Electric Vehicle (EV) market.

The EU car industry had assumed up to a couple years ago that batteries would become a commodity and were low on the list of priorities in developing a competitive domestic EV industry. But although carmakers have invested billions in developing models and technologies around EV automobiles, the European car market remains almost totally reliant on imports for batteries despite the fact that nearly 40 percent of the vehicle value is said by the FT to be the batteries.

For an industry that is the backbone of European manufacturing, that is a staggeringly exposed position to be in. Even the 3 percent that are made in Europe are mostly by Asian-owned companies.

Global production is dominated by Japan’s Panasonic, South Korea’s Samsung and CATL and BYD of China, the FT reports, with China by far the largest, as this chart courtesy of the FT illustrates. 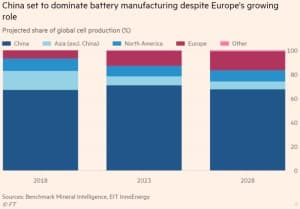 But that is all about to change.

With €1 billion of funding from Volkswagen, Goldman Sachs and Ikea, a company called Northvolt will launch its first factory at Vasteras in Sweden as a dress rehearsal for a much larger Gigafactory in Skelleftea, in northern Sweden, where production should start in 2021. Related: Hedge Funds Are Quietly Piling Into Oil

Supported by cheap loans from the European investment bank and state aid from the EU, the Skelleftea plant is projected to cost up to €4 billion, but will be bigger than Tesla’s Nevada Gigafactory producing some 40 gigawatt hours of capacity by 2024, or some 2 billion individual battery cells, the FT reports. That should be enough for some 500,000 to 600,000 electric vehicles a year with the first phase of capacity already sold out to European carmakers.

READ ALSO  Spies, lies and dormant ties: how to use and abuse LinkedIn

Some may question the sense in locating the factory just south of the Arctic Circle, far from car plants, but the rationale is it can access cheap hydropower. As a result, the plant’s energy costs will be a quarter to a third of those available to its competitors in China.

To form a truly integrated supply chain, however, the EU’s European Battery Alliance (EBA) will need to develop mine supply and lithium refining. Although potential mining projects in some 10 EU countries have been identified, the upstream end of this supply chain remains the farthest from self-sufficiency.

Europe’s move to EVs is being driven more by legislation than customer demand. Much as it is in the U.S., the public remains deeply skeptical of the technologies’ ability to deliver a seamless replacement for the internal combustion engine.

Yet a combination of ever more stringent emission standards on manufacturers, tax penalties and incentives on consumers will bolster support of ventures like Northvolt bringing battery making closer to home — and the market will shift to EVs during the next decade, whether Joe Public wants it (or even believes it) today.