Last month was difficult for bank shareholders, especially in Europe.

The markets have been anticipating the distress coming in the next few months as a direct result of the shutdowns implemented by European governments due to the COVID-19 outbreak.

The chart below shows last month’s sharp decline in ETFs for one of the main European banks. 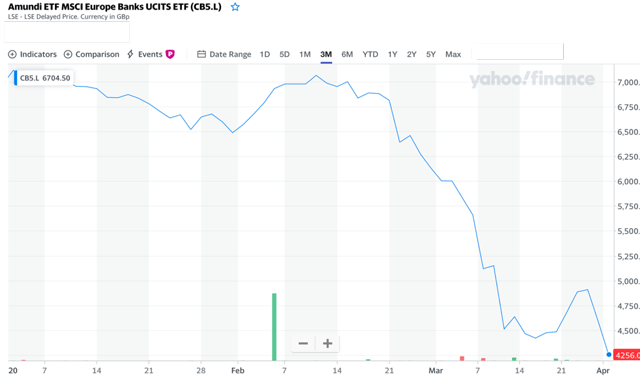 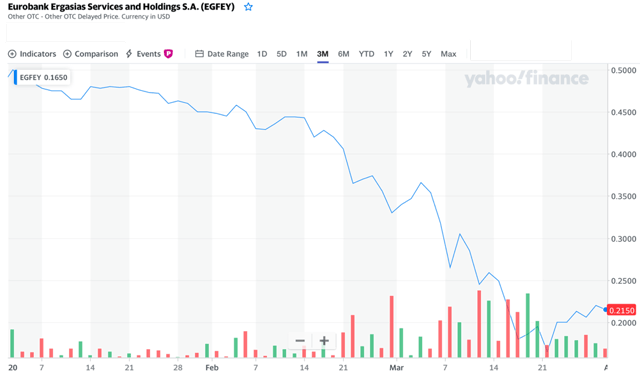 Everything has changed in a matter of weeks, as the COVID-19 outbreak has quickly taken over the world’s social, political and economic life.

So, what actually looked like a promising bank (please refer to the table below) on the path to success in a (financially) recovered environment rapidly turned into a risky investment subjected to a big wave of defaults that will almost certainly hit Greece after an extended lockdown of a big part of its economic activity. 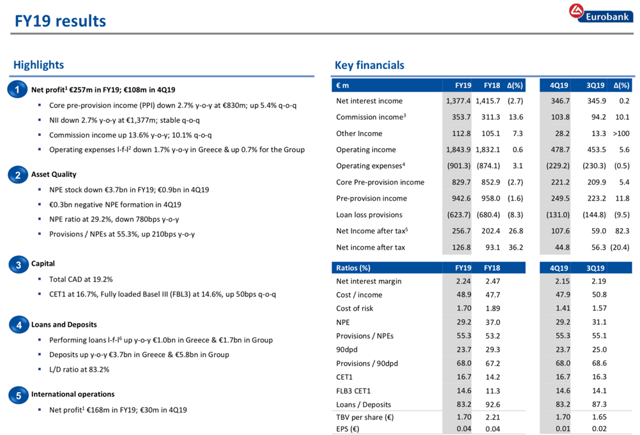 It’s too early to forecast the final price that these prolonged lockdowns will cost the banking system in Europe (and in the US) and way too early to decide whether and which banks will need to be recapitalized in the nearest future (with a consequent bloodbath for present shareholders). However, there are clues suggesting that the Greek drama that unfolded about five-six years after the 2008/9 financial crisis will not repeat itself with the same magnitude.

First and foremost, banks came to the 2008 financial crisis much less capitalized.

Here is how EGFEY’s balance sheet appeared in those days:

The leverage (equity/total assets) was at less than 6%, while today it stands at more than 10%!

It’s true that the assets today include a big portion of NPLs, which are only partially covered (55%), but in 2008, there were also a lot of toxic assets in the balance sheet that were not yet discovered (and thus not covered).

Moreover, the EU was not prepared to face such a disruption in its banking system in 2008-09. Today, admittedly, it has many aces up its sleeve. For example, the ECB will support banks with lifesaving credit lines and will likely stop the contingency plans created for the monitored bank. That provided Greece with the golden rule of NPE ratio reduction to 15% by the end of 2021.

Regardless of whether these targets are consistently eased in the next few months, EGFEY could still be on track to achieve them, thanks to its extraordinary efforts and to the progress made last year to reduce its NPE exposure, summarized in the table below: 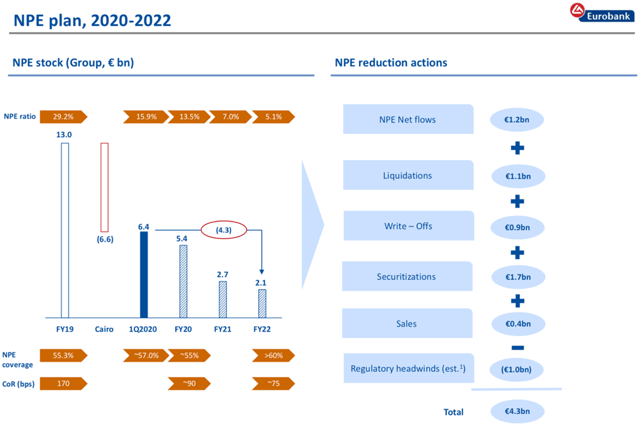 In fact, the Greek bank signed an agreement with the Italian firm doValue last December for the sale of roughly half its non-performing loans, or NPLs (Cairo securitization), and its NPL management service unit (FPS). Here, I talked about this deal extensively, and overall, we can certainly argue that the move was exceptionally timed, considering that now the conditions to buy or sell NPLs have somehow vanished, as EGFEY’s CEO F.C. Karavias also stated during the last conference call:

I don’t think that anybody could seriously think of launching a transaction at an environment like the one that we experience today. Everybody would wait for things to settle down and then launch transaction.

That puts EGFEY in a very compelling condition because, in Greece, the three other main banks didn’t go on with their NPE reduction plans, and consequently, they are all frozen in a much higher bad loan exposure (see the table below).

While at the moment Eurobank should be set on a much more comfortable ratio:

I intentionally used the conditional tense because, at the moment, it is not clear whether the Cairo deal was closed or not!

Again, from the bank’s CEO:

Let me come to our counterparty, doValue, we expect the closing of the transaction in April 30. This is what we have agreed from the beginning… You know that we have signed a binding agreement with doValue on the 19th of December 2019. Since then, we’re working very closely with them on all the processes and steps on a daily basis, including the required approvals, which are necessary for the closure to take place at the scheduled date. We don’t have any sort of concern about the closure of transaction as of that date. In the meantime, the FPS management has a very active dialogue with the management of doValue about further growing the business in terms of increasing assets under management.

So, it’s a bit of an unclear situation where Eurobank’s management does not expect anything to be cancelled nor changed (at least it didn’t expect it on the date of the conference call, March 13th), while admitting that the deal has not been finalized yet (closing date is April 30th). It’s not certain if they have received any warranties or even funds for the closing up to date and/or if there will be penalties for doValue if they back out of their binding offer.

READ ALSO  A Potential Game-Changer? The Details Behind The EU's Proposed Recovery Plan

Moreover, regardless of whether or not doValue wants to reach a closure, it could simply find itself in financial stress, given how greatly its business has been affected by the current economic situation.

Consequently, due to lack of any reliable insight information, it’s hard to make predictions now, but I would estimate that at this point there is a 50/50 chance of a closure before the end of the second quarter and without meaningful changes to the previous agreements.

That is a critical point for an investment decision, because even if the bank share price cratered during the last two months, a price target can’t be set until we have more clarification on the impact of the COVID-19 epidemic, as well as the closure of the Cairo deal.

Greek institutions took significant measures to mitigate the country’s potential financial distress, and Greece is showing signs that it is slowing getting the outbreak under control at the moment (like Italy), but the impact on the country’s broad economy, especially with the imminent start of the tourist season, could be huge.

In the medium term (twelve-sixteen months), everything will be fine, but banks are leveraged entities and their survival (at the equity level, at least) in times of extreme economic shock could be a critical issue in the short term. Even the stress tests submitted to the Greek banks two years ago by the ECB forecasted an adverse scenario of maximum 2.1% of GDP contraction in 2019. Now, the Greek banks (especially Eurobank Ergasias, if it closes the Cairo deal) are much better capitalized than in 2018, but Greece’s GDP contraction of 2020 could be much more severe than 2% (easily three times worse).

Eurobank stock price has been recently hammered because of fears related to the COVID-19 outbreak and the consequent recession it could bring.

The concerns seem partially justified because, in order to contain the spread of the disease, governments around the world (including Greece and Cyprus) have been taking unprecedented measures. However, the relief measures taken by the financial institutions are also unprecedented, and this time, the Greek financial system will have the support of the ECB from day one.

For Eurobank, we should also add that it may have just closed a deal that would allow it to write off half of its NPLs exposure (Code name: Cairo).

There are indeed reasonable doubts on the closure of the deal, given the general situation, but if it does go ahead as planned, that will mean that the company is too undervalued right now. The opportunities in this case vastly outweigh the risks, as the bank will enjoy the safest NPE ratio in Greece by far. On the other hand, if the deal is not closed, then the shares are fairly priced and represent a speculative option as of now.

Right now, investors should not open a position on these premises but put themselves in wait-and-see mode. Current shareholders should hold at these prices.

Disclosure: I am/we are long EGFEY. I wrote this article myself, and it expresses my own opinions. I am not receiving compensation for it (other than from Seeking Alpha). I have no business relationship with any company whose stock is mentioned in this article.