EUR/USD Could Keep Rising As U.S. Dollar Finds No Appeal

The EUR/USD currency pair, which expresses the value of the U.S. dollar in terms of the euro, has been rallying recently, breaking above its recent high of not only 1.1423 but also the 1.1495 high which it found earlier this year as global equities crashed.

The 1.1495 level was the level at which the euro peaked as capital was quickly repatriated back to Europe. Interest rates were cut (as I will discuss again, later) and risk sentiment collapsed, sending capital out of popular equity markets including U.S. equities. Despite USD’s historical appeal, it currently finds limited to no appeal as alternative FX appear to provide more value in USD terms.

USD currently remains the world’s primary reserve currency, as indicated by central bank FX reserves globally. In addition to the USD being the global preference for parking capital, it is also the currency of choice for denominating many risk assets, including WTI crude oil (an important oil benchmark, in addition to Brent Crude; both are conventionally denominated in USD terms).

U.S. equities also arguably represent the world’s most popular equity market, and these are also naturally denominated in USD terms. When global growth expectations and risk sentiment are positive, both oil prices and equity prices tend to rise, and while this might strengthen USD against alternative safe haven currencies (such as the Japanese yen), usually we see broader USD weakness as even riskier currencies like AUD, NZD and CAD (considered commodity currencies, in modern times) usually strengthen. Flows out of USD, previously parked for safety, seek riskier and more rewarding outlets.

We are seeing this at the moment, as while risk sentiment generally remains positive, USD is finding weakness. Yet risk sentiment has, by and large, been positive over the past few years, while the euro has generally been in a protracted bear market. The recent and sustained breakout in the euro is therefore a sign that the market is changing its tune.

The COVID-19 crisis this year has generated extremely loose monetary policy across the board. The Federal Reserve is the United States has cut rates to the zero lower bound (with a target short-term rate of 0.00-0.25%). Carry-trade appeal has been decimated, and even the EUR/USD interest rate spread is now tight (with the U.S. short-term rate midpoint of approximately +13 basis points comparing to the European Central Bank’s deposit facility rate of -50 basis points only implying a spread of +63 basis points).

An implied spread of +63 basis points for EUR/USD is hardly attractive after FX brokerage costs are considered. Actual FX funding rates may differ to the central banks’ target rates from time to time, but as at the time of writing, three-month USD LIBOR was +0.24675% while three-month EUR LIBOR was -0.43543%, implying a spread of approximately +68 basis points. USD bulls were previously happy to own dollars in terms of euros in 2019, but the recent shift in monetary and fiscal policy has in some key respects eliminated the chance for USD to rally significantly.

Currencies tend to rally when they are not only in hot demand, but also when they are illiquid and/or present significant relative value (such as from a terms of trade perspective, to name one factor). With the huge cut in global rates (including USD rates) and U.S. monetary easing this year, USD remains liquid (in ample supply) and therefore is no longer likely to rally on the back of what we call “FX flows of desperation” (such as when countries with USD-denominated debts require more and more USD as their riskier currencies depreciate). FX swap lines between the U.S. and other countries have basically (and effectively) subtracted this risk from the equation this year.

USD has also historically traded at a premium to other currencies, including the euro, on the basis of purchasing power parity (or PPP). PPP models indicate relative values of currencies on the basis of the differing prices in different regions for largely (or completely) homogeneous products. The Economist’s Big Mac Index is one such model, which uses the price of McDonald’s (NYSE:MCD) Big Mac as a largely homogeneous consumer product in different regions to compare the relative values of currencies.

Although the Big Mac Index is presented in a somewhat tongue-in-cheek manner, it is actually useful and revealing. Using the chart below, we can see that a Big Mac cost $5.71 in the United States, but only $4.79 in the euro area. 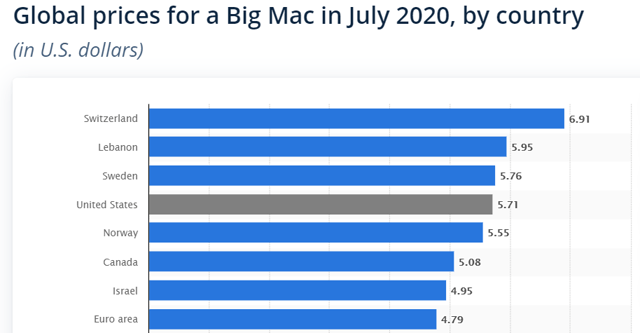 This means that this homogeneous product costs less in Europe than in the United States. The implication is that the euro is cheap, since it implies that one is able to buy a “product” for $4.79 in Europe and sell that name product in the United States for $5.71, presenting an arbitrage opportunity. While it is more complicated than this, the chart below is nevertheless the result of the USD premium: USD consumers have greater international purchasing power, and they use this purchasing power to generate persistent current account (trade) deficits ($104.2 billion in Q1 2020, as shown in the chart below). 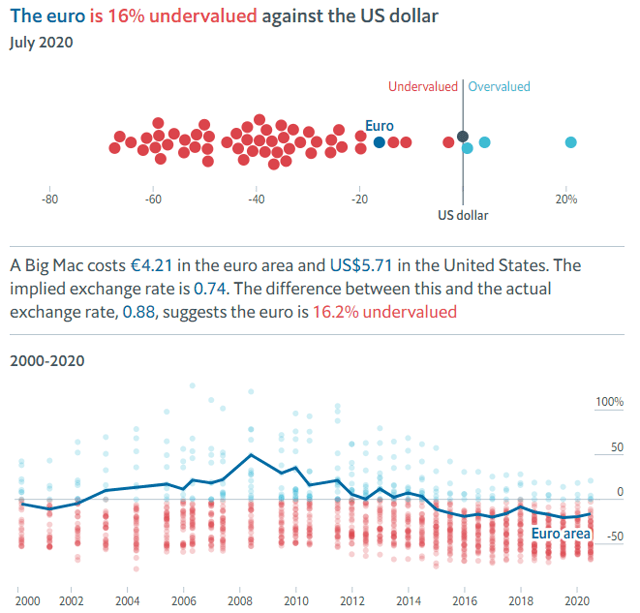 The lower panel in the chart above shows that the euro has indeed traded at a premium on this basis before, without adjusting for other factors. The Economist do admittedly offer GDP-adjusted figures, which in July 2020 revealed that the euro was in fact 2% overvalued (GDP adjustments account for differences in local purchasing power based on differing income levels). Nevertheless, in terms of international trade, it would appear that USD continues to trade at a premium. This is supported by the U.S. trade deficit with the euro area. 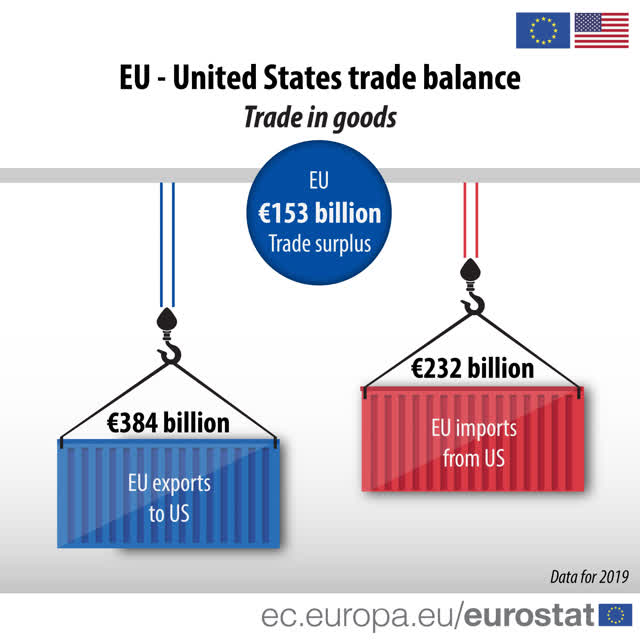 As reports from the Bank of International Settlements reveals, USD still represents around 60% of central bank reserves while the euro accounts for around 20% of reserves. It is perhaps unlikely that USD will lose its entire premium to most other currencies in the near future, but I would entertain the possibility of a continued shift away from USD as 2020 has revealed the power of the Federal Reserve and its increased scope in global markets. In a world of heavy government intervention, there is now perhaps a greater chance for currencies to begin to trade more closely in accordance with shifting terms of trade and other basic fundamental factors like productivity differentials.

Markets seem to be beginning to question whether USD deserves its premium in FX markets.