The EUR/JPY currency pair, which expresses the value of the euro in terms of the Japanese yen, has traded with no consistent bias in recent times. Rising in Q4 2019, falling through much of 2020, before spiking through May; most recently the pair is falling.

The sharp rise through May was unexpected on my part. In my previous article covering EUR/JPY specifically, I believed that the pair would trade lower to 115 (from the then market price of over 117) owing to expanding Italian-German yield spreads (an indicator of risk to the euro) and lower JPY outflows (owing to a collapse in global rates, making international bond investment less appealing from a Japanese perspective).

This level was in fact found; however, I did not anticipate the subsequent spike in EUR/JPY, which appears to have been driven by a combination of both EUR expansion and JPY weakness together (i.e., the move was not one-sided). Nevertheless, it does appear that this move has been largely EUR driven, given that EUR/USD also moved sharply higher through May while USD/JPY has been relatively stable.

To that last point, the Japanese yen is currently trading at a similar level to the U.S. dollar as it did at the start of May (USD/JPY began trading at 107.13 in May, as compared to its recent closing price of 106.89). Meanwhile, EUR/USD remains significantly higher (its May opening price of 1.0952 compares with its recent close of 1.1297).

In a more conventional world, announcements of expansionary monetary policy usually soften currency values in the short term, as enhanced liquidity (and/or an increasing money supply) generally reduces funding costs and therefore typically the value of a currency. However, macroeconomic fundamentals, performance differentials, and separately the demand from mechanical shifts (such as capital repatriations) and changes in both global risk sentiment and the collective assessment of regional political and economic risk (in one word: confidence) are responsible for the larger, longer-term moves.

In a less conventional world, such as the one we currently find ourselves in (amidst both the COVID-19 pandemic and the economic chaos that has ensued as a result of this pandemic), markets have apparently lost their interest in pricing in (short-term) discounts to currencies associated with this kind of monetary policy. In mid-May particularly, there was speculation that the European Central Bank would expand its so-called Pandemic Emergency Purchase Programme by 500 billion euros; at the start of June, the figure was confirmed as being 600 billion euros.

The ECB also updated its economic projections, projecting the eurozone economy to contract -8.7% in 2020 (a significantly adverse change to its prior forecast for real GDP growth of +0.8% earlier on, in March 2020).

In my opinion, it appears that the initial speculation of increased ECB intervention, combined with validation in June, helped EUR to move higher on the back of reduced eurozone pessimism. Nevertheless, the fact that EUR/JPY (as shown below) was able to breach 122.50 in such rapid fashion (from the low of around 115, in less than 30 days) suggests that this move can also be attributed to mechanical factors. That is to say that the market likely ran through many stop-loss orders; the extent of the repricing alone would suggest not only reduced pessimism but outright optimism in the euro.

A strengthening euro versus the yen is indicative of a risk-on regime. FX markets are, however, appearing to settle down, with classic risk-on FX crosses such as USD/JPY and AUD/JPY now trading in a fairly stable fashion in alignment with the start of Q1 2020.

READ ALSO  The $1 billion Mega Millions jackpot has a winner

AUD/JPY, as shown above, is trading close to the midpoint of its “pre-COVID” trading range (i.e., the midpoint of its Q4 2019 trading range, at 74.20). This pair is finding support at this level, and may be able to push higher, although it is debatable whether or not these pairs will be able to stage breakouts, as there is perhaps little justification to be more optimistic on global growth today than in Q4 2019. Markets were not pessimistic at the start of the year either.

Since EUR and JPY funding rates were already low going into the pandemic. The ECB’s deposit facility rate of negative -0.50% compares with the Bank of Japan’s short-term rate of negative -0.10%. These have been left unchanged. The spread is not really wide enough to attract carry trades. Short-term optimism has enabled EUR to move higher, but we should also note that EUR appears to be a crowded trade at this juncture.

EUR crosses even appear a little euphoric; they are almost implicitly vying for a new trend in the euro (to the upside, in contrast to its long-term bearish trajectory against USD and certain other currencies including its neighbor CHF). As shown below, speculative positioning data from the Commodity Futures Trading Commission’s weekly Commitments of Traders report shows that speculators are net-long EUR at levels that are approaching extremes (at least relative to recent history). 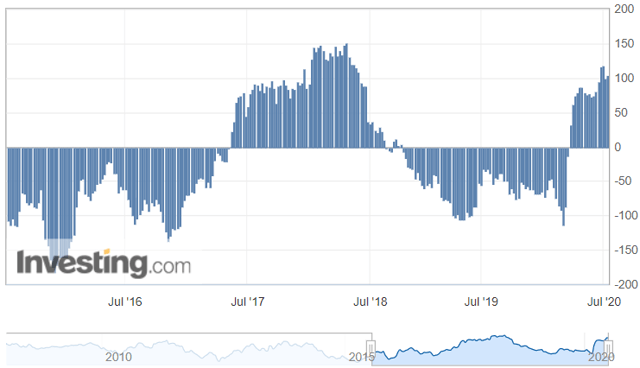 As Mark Twain said, “Whenever you find yourself on the side of the majority, it is time to pause and reflect.” While we may see EUR/JPY attempt to retest the 122.50 region (aligned with the highs of the start of the year), I believe this recent range expansion is excessive.

The speculative positioning data above compares with that of the Japanese yen, as shown below, which is also net positive yet relatively modest (and indeed lower than it was in March).

READ ALSO  Steady, as she goes - Armin Laschet, the man who might succeed Angela Merkel | Europe 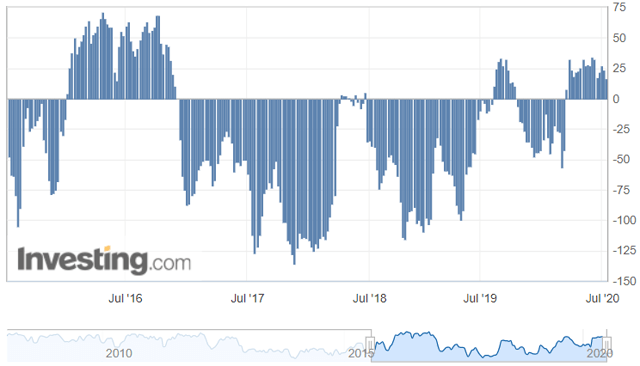 Note also that these speculative positions are taken from U.S. futures markets, and therefore can be viewed from the perspective of USD. It is possible that the net-long positioning in both EUR and JPY is indicating the potential for a bullish reversal for USD in the near term. This could see both a weaker euro and a weaker yen, but it appears that EUR has further to fall, and as such, EUR/JPY could drift lower over the next few weeks (below 119; under the pair’s most recent lows).

We will also need to monitor ongoing macroeconomic indicators, as well as (by extension) business indicators such as Purchasing Managers’ Indices. Yet, I believe that many of these indicators are weak estimators of the future at present, as there is too much uncertainty as to which countries will fare best from the recent stimulus programs.

For now, FX markets would appear to favor range-bound trade and mean reversion. While we might not be able to predict the future, we can trade against overconfidence. Significant trader bias on one side of the market should probably be traded against in times of great uncertainty, and the recent excessive bullishness reflected in EUR futures markets would support the potential for further EUR weakness. I view the recent rise in EUR/JPY (and other EUR crosses) with skepticism.

Previous PostOfficial COVID-19 Statistics Are Missing Something CriticalNext PostFor First Time Since The Great Depression, Americans Must Wait In Line For The Most Basic Essential Items