The current severe economic downturn may force the EU to keep its budget rules suspended for a further year, the bloc’s economics commissioner has said, as he warns there is a risk of a double-dip recession.

Paolo Gentiloni said officials would discuss in the coming months whether an extension into 2022 of the “general escape clause” in the EU’s budget rules is merited, and that the overriding message to member states should be that they keep their fiscal support in place as long as needed.

“The idea of a V-shaped recovery is an illusion and I never believed in it,” Mr Gentiloni told the Financial Times in an interview. “The general escape clause will remain in place [for] all of 2021. But that doesn’t mean from January 1 2022 it will be un-triggered.”

This spring Brussels took the unprecedented step of effectively suspending member states’ obligations to work towards the eurozone’s debt and deficit targets. The move was prompted by the scale of the looming downturn as Covid-19 forced member states into lockdowns.

The European Commission later confirmed it would keep the “general escape clause” in place for 2021 as well. Member states have in recent weeks been forced into a new round of restrictions as they cope with the second wave of infections, depressing the outlook for economic activity again.

The reactivation of the fiscal rules will depend on when the commission judges that the eurozone is no longer in a severe downturn. It will make an assessment in the spring of 2021. The European Fiscal Board, a commission advisory body, earlier this year said the commission should judge this by when output returned to pre-pandemic levels. 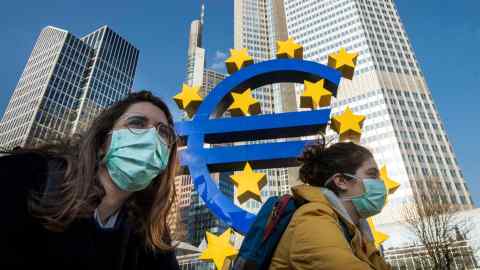 The commission’s latest forecast showed output in the eurozone still remaining below its pre-pandemic levels in the final quarter of 2022. If its spring forecast confirms that picture, officials think there will be a strong case for a further extension of the escape clause.

“The European Fiscal Board’s proposal to use a pre-crisis level of real GDP of the euro area and EU as a reference certainly has merit,” said Mr Gentiloni. “The discussion will take place in the next months, but if we are still in a severe economic downturn we will need to keep this general escape clause in place.”

In its forecasts last week, the commission predicted that the eurozone economy would contract by 7.8 per cent this year before growing 4.2 per cent in 2021 and 3 per cent in 2022. By the fourth quarter of 2022, Spain and Italy will be the furthest behind their pre-crisis output levels, the forecasts show, followed by the Netherlands, Croatia and Belgium.

Mr Gentiloni said his message to member states was that they did “as much as is needed for as long as needed to support their economies”. He added: “The recovery has been interrupted, and we will enter next year at a very, very low level of activity.”

Before the news on Monday that a Covid-19 vaccine developed by Pfizer and Germany’s BioNTech had been found to be 90 per cent effective, the commission said early availability of an effective vaccine could provide an “upside risk” to its forecasts. On the other hand, a “sustained increase” in the number of daily infections could constitute a downside risk.

Among the complicating factors surrounding the reactivation of the fiscal rules is whether member states should seek to reform them before they are imposed again.

Last month a report from the EFB called on capitals to address the weaknesses in the bloc’s Stability and Growth Pact before reapplying the currently suspended rules. Mr Gentiloni has argued that the EU needs to re-examine the role of its public debt rule and look into how to better incentivise public investment.