The European Medicines Agency has accelerated the approval process for a Covid-19 vaccine developed by Germany’s BioNTech and US pharma group Pfizer, to allow for the rapid authorisation of the shot as soon as safety data from its trial allows.

The decision by the EU regulator was based on preliminary results from the companies’ early clinical trials, which showed the vaccine triggers an immune response in adults, the regulator and the companies said on Tuesday.

The Pfizer/BioNTech shot is the second Covid-19 vaccine to be approved for the EMA’s accelerated process, which involves conducting “rolling reviews” of the trial data while the trial is ongoing. Last week, the agency confirmed that it had started that process with the vaccine developed by AstraZeneca and the University of Oxford.

Pfizer has previously said it could receive emergency approval for the vaccine from the EMA’s US counterpart, the Food and Drug Administration, this month.

Together, Pfizer and BioNTech say they have the capacity to manufacture 100m doses of their vaccine this year and at least 1.3bn doses in 2021.

Several countries have already secured tens of millions of doses of the vaccine — which will require a second booster shot — including the US, the UK and Japan. 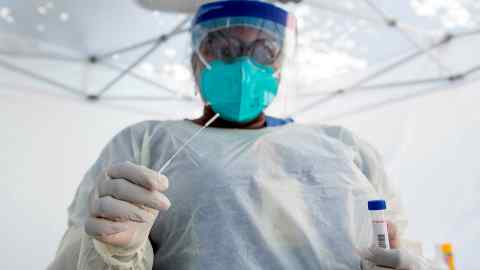 The EU is in the final stages of reaching an agreement to secure 200m doses from the companies.

Mainz-based BioNTech, whose vaccine relies on mRNA technology, stressed that the speeded-up process by the EMA would not dilute the regulator’s safety standards.

“It is our duty to ensure that while we are working to develop a vaccine at unprecedented speed to help break this pandemic, we do so with the highest ethical standards while adhering to sound scientific principles,” said BioNTech’s co-founder, Ugur Sahin. The BioNTech and Pfizer trial involves more than 37,000 participants.

Rolling reviews are used to evaluate clinical data in separate chunks, as they become available, rather than in one go at the end of the trials.

They can speed up approval and marketing significantly, especially when there is high unmet medical need. The EMA has previously used this mechanism for Gilead’s remdesivir, the only antiviral partially approved to treat Covid-19 both in Europe and in the US.

Drugmakers and regulators have faced political pressure to rush through a Covid-19 vaccine.

US President Donald Trump, who is being treated for Covid-19 and seeking re-election next month, has pushed for early approval of a vaccine in a bid to secure another mandate.

But companies and regulators have sought to puncture that enthusiasm. Moderna and FDA commissioner Stephen Hahn have said that its vaccine would not be ready before election day and that standards would not be lowered because of political pressure, the Financial Times has reported.

In August, Russia became the first country to approve a Covid-19 vaccine — named Sputnik V — for civilian use, but western experts cast doubt on its efficacy and safety.

Previous PostCaffeine clash – Who will win the brewing battle between Japan and America? | BusinessNext PostSE: Keiser Report | Free Money to the People | E1602