Brussels is exploring whether to restrict the possibility for hedge funds to be managed from overseas financial centres such as the City of London, reviving an idea that UK asset managers see as an existential threat.

The European Commission included questions on a possible tightening of the rules governing hedge funds in a consultation paper published on Thursday, picking up on suggestions earlier this year from the bloc’s top market regulator that “delegation” of fund management should be more clearly limited in response to Brexit.

A practice at the heart of global investment management, delegation allows managers to base and sell funds in the EU, while outsourcing investment decisions to financial centres such as the UK, which will become a so-called third country at the end of the Brexit transition period.

Existing EU rules say that delegation should be for clear business reasons and not undermine the effectiveness of supervision by national regulators, but do not set prescriptive limits.

The consultation document asks if the bloc should go further, for example by setting “quantitative” limits on delegation or establishing a list of “core or critical functions” that should be performed in the EU.

“What is concerning is that the EU is using Brexit as an excuse for changing international norms,” said one UK fund management executive. The person added that the push to tighten the delegation rules was a politically motivated manoeuvre aimed at forcing investment groups to shift portfolio manager jobs — the sector’s most “high-profile, profitable functions” — to continental Europe.

The commission document also asks whether action is needed to clamp down on “letterbox entities” — shell companies that take orders from foreign delegates — and whether different rules are needed depending on delegates’ location in order to safeguard investor protection.

While Brussels insists it is not prejudging the conclusions of the review, the idea of restricting delegation fits with broader themes of onshoring and centralising oversight that have come to the fore in EU financial services policy since the 2016 Brexit vote.

As the EU has grappled with the implications of the City leaving the bloc’s regulatory purview, Brussels has toughened its assessments of whether non-EU financial services firms should be granted key market access rights. The EU has also legislated to allow it to force critical market infrastructure to move into the bloc to serve European customers.

The UK is the second-largest portfolio management centre in the world, managing £8.5tn in assets, according to trade body the Investment Association. Of this sum, about £2.1tn is managed on a delegated basis on behalf of EU-based investors.

The commission consultation paper only covers hedge funds and other “alternative investment” vehicles such as private equity funds because it is the start of a planned review of a 2011 law, known as the Alternative Investment Fund Managers Directive (AIFMD), that regulates the sector. 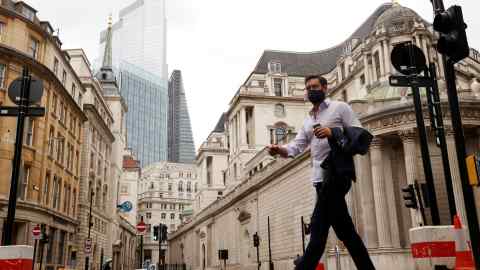 But the EU’s markets regulator already called in August for “further legal clarifications on the maximum extent of delegation” for both this industry and for retail investment funds, which are governed by a different regulatory framework known as Ucits.

Those proposals spooked international asset managers, who fear an overhaul would lead to fragmentation and severe disruption to their operating models.

Should the commission decide to press ahead, it will relaunch a policy battle that has already played out once since the Brexit vote. In 2017, Brussels pushed to toughen enforcement of existing constraints on delegation.

Despite the enthusiasm of some EU governments, including France, the 2017 plan was eventually beaten back by other member states, with the criticisms led by Luxembourg, whose large fund industry is closely interlinked with London.

Camille Thommes, director-general of the association of the Luxembourg fund industry (Alfi), warned the commission against unpicking delegation, which he described as “a tried and tested practice that largely contributed to the development of Ucits and the AIFMD into a global brand of choice for fund management”.

The commission’s consultation paper also questions the use of national placement regimes that allow fund managers based in non-EU territories, such as Jersey, Guernsey and the Cayman Islands, to serve clients in individual EU countries, asking whether they “create an uneven playing field” between EU and non-EU fund managers.

There are concerns in Brussels that fund managers may be deliberately choosing that approach because of a lighter regulatory and supervisory burden compared with setting up shop in Europe and complying with the AIFMD.