ESSA Bancorp, Inc. (NASDAQ: ESSA) reported earnings of $0.65 per share in the first half of the year, up 21% from the corresponding period last year. An increase in non-interest income and a drop in provision expense were the major drivers of earnings. ESSA’s earnings will likely decline in the second half of the year due to a hike in provisions expense amid the COVID-19 pandemic. Further, non-interest income will likely return to a more normal level after remaining elevated in the first half of the year. The earnings decline in the second half will likely wipe out the gains of the first half of the fiscal year 2020. Therefore, I’m expecting ESSA to book earnings of $1.17 per share in the fiscal year 2020, almost unchanged from last year. Although ESSA is currently trading at a discount to its fair value, it seems unlikely that the stock price will rise in the next two to three months. ESSA is currently facing a high level of risk, which will most probably keep the stock price subdued in the near term. Consequently, I’m adopting a neutral rating on ESSA.

As mentioned in the second quarter’s earnings release, ESSA approved payment relief for around 12.3% of total loans in April. The proportion of loans requiring payment relief towards the beginning of the pandemic shows the extent of credit quality problems in the portfolio. The payment relief itself will not impact provision expense in the June-ending quarter, but the credit quality of loans requiring relief can deteriorate further, which will then lead to an increase in provision expense. Further, auto loans made up around 4% of total loans, which will likely drive provision expense in the second half of the year. The heightened unemployment in Pennsylvania will likely hurt the debt servicing ability of auto loan borrowers. Moreover, around 37% of total loans were to the commercial real estate segment as of March 31, 2020, which increases the risks of an increase in provision expense.

READ ALSO  Central Bank Digital Currencies: Another Front in the War on Cash

ESSA’s loan portfolio is concentrated in residential real estate, which made up 44% of total loans as of March 31, 2020. The residential real-estate segment is relatively safe amid the COVID-19 pandemic compared to other segments. So far, house prices have held up well during the pandemic, as shown in the chart below.

ESSA’s net interest margin, NIM, declined by 10bps in the second quarter of the year following the 150bps Federal Funds rate cut in March. The NIM will likely decline further in the second half of the year; however, the decline will be limited because of the stickiness of the average yield. ESSA operates like a thrift institution with a focus on fixed-rate, long-term residential mortgages. These mortgages will likely make the average yield on earning assets downward sticky, which will mitigate the impact of interest rate decline on NIM. As mentioned in last year’s 10-K filing, a simulation conducted by the management showed that a 200bps decline in interest rates could increase net interest income by 0.5% over twelve months. The simulation shows that ESSA’s NIM is not much sensitive to interest rate decline. Considering these factors, I’m expecting NIM to decline by 7bps in the fiscal year 2020. The following table shows my estimates for yield, cost, and NIM.

READ ALSO  Is Wizz Air flying in the face of the Equality Act over face masks?

ESSA’s loan growth will likely continue in the second half of the year due to low interest rates that will boost the demand for residential mortgages. Further, the Paycheck Protection Program, PPP, will likely increase loans by around 3% in the third quarter. As mentioned in the earnings release, ESSA funded $44.4 million of loans under PPP in April. Assuming a margin of 2.75%, PPP will add $1.2 million to ESSA’s net interest income this year, provided a majority of PPP loans are forgiven within a few months. Considering these factors, I’m expecting ESSA to end the fiscal year with loan balances of $1.4 million, up 4% from the end of the fiscal year 2019. The following table shows my estimates for loans and other balance sheet items. 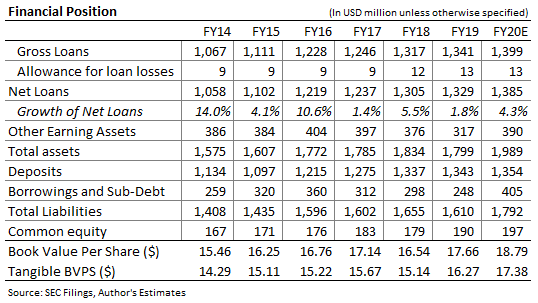 The decline in non-interest income and the increase in provision expense will likely decrease earnings in the second half of the year compared to the first half. The second half’s net income decline will likely cancel out the increase in the first half; hence, I’m expecting earnings to be almost unchanged in the fiscal year 2020 compared to last year. I’m expecting ESSA to book earnings of $1.17 per share in the fiscal year 2020, down 0.5% from last year. The following table shows my income statement estimates.

I’m using the historical price-to-book-value multiple, or P/B, to value ESSA. The stock traded at an average P/B multiple of 0.82 in the past, as shown below.

Multiplying the average P/B ratio with the forecast book value per share of $18.8 gives a target price of $15.4 for the fiscal year-end, i.e. September 2020. This price target is 17.2% above the closing price for July 14, 2020. The following table shows the sensitivity of the target price to the P/B ratio.

Apart from the price upside, ESSA is also offering a modest dividend yield of 3.4%, provided the company maintains its quarterly dividend at the current level of $0.11 per share. Moreover, the company was ranked first in its industry by Seeking Alpha’s Quant Ratings as of July 14, 2020.

Risks Likely to Restrain Stock Price in the Near Term

The uncertainties related to the severity and duration of the COVID-19 pandemic have increased the risks to earnings. If the pandemic lasts longer than expected, then loan delinquencies, problem assets, and foreclosures may increase leading to actual provision expense surpassing its estimate. Moreover, house prices can decline, which will further increase loan losses. Additionally, prolonging of the pandemic can lead to a reduction in the demand for credit. These risks and uncertainties will likely overshadow the attractive valuation in the near term of two to three months, and keep the stock price subdued. Consequently, I’m adopting a neutral rating on ESSA.

Additional disclosure: Disclaimer: This article is not financial advice. Investors are expected to conduct their own due diligence, and consider their investment objectives and constraints before investing in the stock(s) mentioned in the article.