Erdogan tilts at Macron as France mourns victims of terror

Seen from President Emmanuel Macron’s Elysée Palace in Paris, it is perverse and wounding that the most visible foreign reaction to brutal Islamist terror attacks on French soil has been condemnation in Muslim countries not of the murders but of France’s response to them.

Seen from the capitals of some of those Muslim-majority nations, on the other hand, it is perverse that Mr Macron persists in defending absolute freedom of speech and the right to blaspheme the Prophet Mohammed.

In public and in private, leaders and officials on both sides of the dispute have said this week that they are determined to stand their ground. Each camp has accused the other of exploiting an extremely inflammatory issue for domestic political purposes.

Political analysts conclude that the recent attacks in France — including the beheading of a schoolteacher by a Chechen refugee and the slaughter of three people in a church in Nice by a Tunisian illegal immigrant — and the resulting French crackdown on Islamists have again exposed two irreconcilable world views.

By the end of another gruesome week for terror in France, French and Turkish officials showed signs of wanting to lower the temperature in a dispute that was threatening to be economically damaging for both sides — but not before anti-French street demonstrations and boycott calls had erupted from the Middle East to south Asia in countries including Iran, Qatar, Kuwait, Pakistan, Bangladesh and Somalia.

Demonstrators demanded an end to the caricatures of the Prophet at the centre of the latest outbreak of violence and complained that France — which champions religious freedom and has the largest Muslim minority population in western Europe — was guilty of Islamophobia.

Mr Erdogan, criticised by activists for his silence on the much more severe persecution of Uighur Muslims in China, led the anti-French charge, calling for a boycott and insulting Mr Macron only a month after the two men tried to defuse the tensions between them in a long and apparently civil telephone call on September 22.

The Turkish president is already tussling with Mr Macron over their conflicting interests in Syria, Libya and the eastern Mediterranean. The argument over Islam has provided a leader who sees himself as a champion of the Islamic world with a useful distraction from the woes of the Turkish economy and the lira, which has plunged to a succession of record lows against the dollar this week. 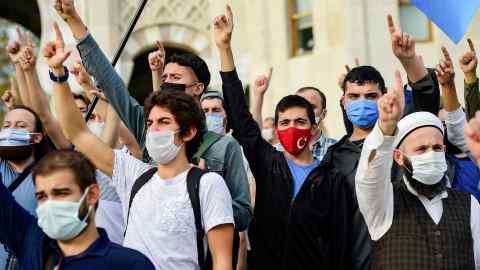 “Erdogan has used this new line of Macron’s [against Islamists] in a very opportunistic manner,” said Dorothée Schmid, a Middle East expert at Ifri, the French foreign relations institute. “For Erdogan it’s really a political question . . . He plays on the question of values.”

Yet Emre Gonen, a lecturer in international relations at Istanbul’s Bilgi University, said that deep feelings of rejection and hurt in Turkey over the country’s failed attempts to join the EU meant that standing up to Mr Macron was “almost a necessity” for the Turkish leader. “He couldn’t let it go,” he said.

In a sign of the broad disapproval of the French president’s remarks about radical Islamism, even the Republican People’s party (CHP) founded by Mustafa Kemal Ataturk — Turkey’s staunchly secularist founding father who was inspired by French “laïcité”— felt compelled to condemn what it called his “disrespectful and dangerous” comments about Islam.

READ ALSO  How The Fed Created The Ultimate Paradox: Stocks At All-Time Highs With No Liquidity And Soaring Realized Vol

Still, Kemal Kilicdaroglu, CHP leader, did not miss the chance to take a shot at Mr Erdogan: he called on the Turkish president to lead from the front in the boycott of French products by burning his wife’s Hermès handbag.

In Pakistan, Prime Minister Imran Khan, facing opposition protests against his own government, welcomed the distraction of being able to accuse Mr Macron of fomenting Islamophobia. In a rare display of unity, the ruling and opposition parties passed a joint anti-French resolution.

Pakistanis, however, view Mr Khan’s response as part of the routine political business of declaring devotion to Islam. There has been no visible drop in the number of motorists buying fuel or food from French companies Total and Carrefour.

In the Gulf, the boycott calls gained more traction. Kuwaiti co-operative societies that account for as much as 80 per cent of grocery sales have pulled all French produce from their shelves.

“To be honest, I didn’t expect the boycott to be so big, but it is mushrooming here and mushrooming around the Muslim world,” said Saoud Al-Farhan, a former government official.

French officials in Paris and the Gulf retort that the impact of the boycotts has so far been modest. Geoffroy Roux de Bézieux, head of the French employers’ federation Medef, called on companies to resist “blackmail” and to prioritise their principles over their business.

That robust response from employers was characteristic of France’s largely united response to the latest upsurge of terror. Muslim religious groups loyal to the state, and individual Muslims of north African origin who attended demonstrations paying homage to Paty, threw their weight behind Mr Macron’s condemnations of terror and extremism.

French politicians across the spectrum condemned the attacks. At the Elysée there was anger at foreign interference in French affairs and the lack of appreciation in Ankara or Islamabad about the shock for France of having a teacher beheaded on the street.

Mr Macron was initially faulted by some critics at home and abroad for having said in a speech on Islamist “separatism” in France at the start of October that “Islam is a religion which is undergoing a crisis everywhere in the world” — a statement regarded by Ms Schmid as a “clumsy” generalisation.

But the subsequent beheading of Paty and the murder of the three in Nice has overshadowed that speech, united France in outrage and made most of its citizens more determined than ever to stand up for their republican freedoms and secular constitution.

Analysts foresee no imminent meeting of minds between Mr Macron and his Muslim critics on such an existential issue, but both Turkish and French leaders moved on Thursday to ease rising tensions.

Turkey, which had angered France by being slow to send condolences after Paty’s murder, swiftly condemned the “savage attack” in Nice and expressed “solidarity with the people of France . . . against terror and violence”.

Jean-Yves Le Drian, French foreign minister, issued what he called “a message of peace to the Muslim world” in a speech in the National Assembly, reaffirming French religious tolerance and urging people not to listen to manipulative voices trying to stir up anger.