Erdogan and Hamas: ‘He’s presenting himself as leader of Muslim world’

At Friday prayers at the Al Aqsa Mosque in East Jerusalem, the faithful often hold up portraits of Recep Tayyip Erdogan, the Turkish president, worshipping under the gleaming gold crescent on the Dome of the Rock that was paid for by Turkey.

Mr Erdogan’s popularity with Palestinians reflects his long championing of their struggle for nationhood and comes as their cause has slid down the list of regional concerns, sidelined by Israel’s wooing of the Gulf states. He has stepped into that vacuum, coupling his adventures in Libya and Syria with a desire to wield influence in the Israeli-Palestinian conflict.

For Israel the most troubling aspect is his embrace of Hamas, the militant group that controls the Gaza Strip, and is considered a terrorist group by Israel, the EU and the US.

The US, a close Israel ally, has also voiced concerns. Last month, in a rare public statement on this relationship, it strongly objected to Mr Erdogan hosting two Hamas leaders in Istanbul, chiding him for his “outreach to the terrorist organisation”.

The US rebuke came after Mr Erdogan tweeted a photo of his meeting with Hamas figures, including Saleh al-Arouri, a prominent military commander who worked in Lebanon, Syria and the occupied West Bank.

There’s a broader struggle still under way over the contours of the regional order, and that is partly what motivates him

“There are both geopolitical and ideological considerations here,” said Sarah Feuer, a fellow at the Washington Institute for Near East Policy and the INSS in Tel Aviv, referring to Turkey’s regional rivalry with the UAE and Saudi Arabia.

READ ALSO  Pepe Escobar On The Assange Trial: The Mask Of Empire Has Fallen

“Erdogan sees emerging alliances in the region as a threat but he’s also presenting himself as the leader of the Muslim world and flag bearer for Islamist movements, to counter the Emirati-Saudi-Egyptian camp. There’s a broader struggle still under way over the contours of the regional order, and that is partly what motivates him.”

“It fits in perfectly,” said a UN official, who has mediated between Israel and Hamas for nearly a decade. “Find the one thing that Israel doesn’t have an answer to, doesn’t know how to manage and can’t get rid of, and make it your own personal vanity project.”

In the past decade, Turkey has funded hospitals, schools and economic projects both in the Gaza Strip, run by Hamas, and in the occupied West Bank, moves that have irked the Israeli government but been welcomed by Palestinians, who have long sought a champion unmoved by Israel’s anti-Iran posture and untamed by American foreign policy demands.

The Turkish president has regularly scolded prime minister Benjamin Netanyahu, who has led Israel’s most rightwing government in years. Mr Erdogan has made the Al Aqsa Mosque, Islam’s third-holiest shrine and perhaps the most sensitive of issues dividing the Jews and Arabs, a centrepiece of his pledges to liberate Palestine from Israeli occupation.

Mr Erdogan’s embrace of Hamas makes ideological sense. The Islamist militant group emerged in 1987 as a rival to the secular, left-leaning Palestine Liberation Organization, drawing inspiration from the Muslim Brotherhood of neighbouring Egypt. The Turkish president, whose own roots lie in Islamist politics, views the Brotherhood and its offshoots as fellow travellers. “There is this sense of kindred spirit and solidarity,” said Steven Cook, a senior fellow at the Council for Foreign Relations in Washington.

It also works politically for Mr Erdogan, who has increasingly melded foreign policy with domestic considerations, and strives to cast himself at home as a champion of Muslims across the world.

Mr Erdogan inherited a strong relationship with Israel when he swept to national power almost 20 years ago. Turkey, which was the first Muslim-majority nation to recognise the fledgling Jewish state, forged close co-operation on defence and security with Israel in the 1990s. Trade with Israel was $6bn last year, according to the Turkish official statistics — up from $4.3bn in 2016.

But a fiery clash between Mr Erdogan and President Shimon Peres on a Davos stage in 2009 marked the “dividing line” between two chapters in Turkey-Israeli relations, said Asli Aydintasbas, a senior policy fellow at the European Council on Foreign Relations.

For Israel, Turkey’s ideological support of Hamas had until recently been a manageable irritant.

But a 2019 meeting between Mr Erdogan and Ismail Haniyeh, the chief of Hamas’ political wing and who polls say is the most popular leader in the Palestinian territories, signalled a shift in Turkish strategy, from moral support to material, according to people briefed on the issue.

As well as financial help, over the past two years, Turkey has also granted citizenship to dozens of Hamas members, according to one person briefed on the issue, allowing them to travel without visas to more than 100 countries. This brought the relationship between Turkey and Israel to a near halt, according to two others briefed on the situation — and was what triggered the recent reprimand from the US.

READ ALSO  "This Resets The Race" - SCOTUS Opening Creates Opportunity For Trump To 'Change The Subject' Before Nov. 3

The Israeli security establishment had already been suspicious of Turkish passport holders, subjecting them to stringent scrutiny the Turks describe as targeted harassment. Turkey insists that it never grants citizenship to people with proven links to terrorism or violence. 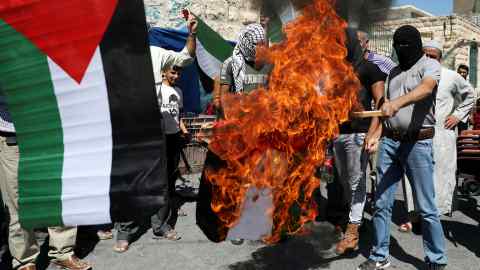 Turkey argues that Hamas — which won the last election in 2006 — is the legitimate representative of the people of Gaza. Officials stress that they also have strong ties with the secular Palestinian party Fatah, which runs the West Bank.

Ankara believes that Israeli pressure on Turkey stems from a sense of emboldenment built on the basis of strong support from Donald Trump and the recent deal to normalise relations with the United Arab Emirates.

“They [ the Israelis] have been isolating Gaza for a long time physically and politically,” said a senior Turkish official. “And now they are targeting countries that have contacts with Hamas.”