Turkey’s president Recep Tayyip Erdogan has accepted his son-in-law’s decision to resign from government following months of mounting criticism over his management of the country’s economy and a plunge in the value of the Turkish lira.

After more than 24 hours of silence in response to Berat Albayrak’s shock announcement on Sunday night that he would step down as Treasury and finance minister, a statement from the president’s communications directorate said Mr Erdogan had agreed to his “request to be relieved of his duties”.

The statement, which praised Mr Albayrak for ensuring that Turkey had suffered “the minimum amount of damage” during the coronavirus pandemic, did not say whether he would be given another job in government. Nor did it announce who would succeed him as the steward of the country’s $740bn economy.

If the former business executive, who is married to the president’s daughter Esra, is fully sidelined from politics it would mark a spectacular fall from grace for the 42-year-old and could trigger a significant shift in dynamics within the Turkish state.

Mr Albayrak, who entered parliament in 2015 and joined his father-in-law’s cabinet the same year, had gained huge responsibility and influence across government as the Turkish president consolidated his own power in recent years.

Many in Mr Erdogan’s Justice and Development party (AKP) had believed that the 66-year-old Turkish president, who swept to national power in 2002, was grooming his son-in-law as his political heir.

Yet tensions within the AKP over the state of the nation’s economy — and a slide in the lira that had seen the currency depreciate as much as 30 per cent against the dollar this year — appear to have caused a rupture within Turkey’s most powerful dynasty. 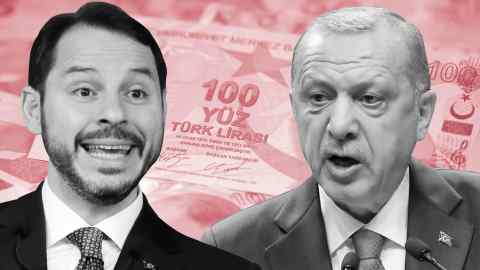 While Mr Albayrak cited his health as the reason for his stepping down, his resignation announcement came a day after the Turkish president sacked the governor of the central bank and replaced him with a critic of his son-in-law’s economic policies.

In his resignation statement, Mr Albayrak alluded to conflict within the government and made only a cursory reference to his father-in-law, whom he did not thank.

The country’s most senior economic official had faced growing criticism from the Turkish opposition and from within the AKP.

Under his direction, the central bank had burnt through $140bn in an attempt to support the Turkish lira over the past two years, according to a Goldman Sachs estimate. The currency intervention, which has taken a heavy toll on the country’s foreign exchange reserves, failed to prevent the lira’s decline. Prior to Mr Albayrak’s resignation, it had tumbled through a succession of record lows against the dollar — the second sharp depreciation in two years.

The weak currency has fuelled double-digit inflation, eroded living standards and placed strain on Turkish corporates burdened with foreign currency debt, as well as the banks that lent them money.

Mr Albayrak continued to insist in recent weeks that the economy was outperforming those of many other countries amid the coronavirus pandemic, and that the weaker exchange rate would make Turkey more competitive. He repeated that message in a meeting with AKP members of parliament last week, according to Turkish media reports.

Bulent Arinc, one of the few AKP founders to remain in the party, broke cover on Saturday with a rare public rebuke of Mr Albayrak from a serving ruling party member. “There are absolutely problems in the economy,” he said, adding that he had objected to the finance minister’s claims to the contrary.

The departure of the president’s son-in-law raises questions about future power dynamics within the Turkish state.

As well as running the nation’s economy, Mr Albayrak had built up influence across government, within the ruling party and in the judiciary, according to current and former ruing party officials.

His older brother, Serhat, heads an important media group and also holds sway over the entire network of pro-AKP newspapers and broadcasters that have come to dominate the Turkish news landscape.

Previous PostMcConnell Backs Trump In Push For Recounts, Says Shouldn’t Accept Election Results “From The Media”Next PostThe Election is Not Over