Most stocks with exposure to batteries, energy storage, or renewables have taken off this year. This is partly due to industry fundamentals – electric transport is growing like crazy – but it’s also influenced by the Tesla (TSLA) effect. Any stock that looks like Tesla has become a retail investor darling with hopes of getting rich quick.

That said, there are some companies that remain attractive opportunities and have yet to have future growth priced in. Eos Energy Enterprises (EOSE) is one of those companies. While it’s already run up 35% from its SPAC launch to $13.50 per share, it remains attractive through $15-20 in the short term. Traded warrants (EOSEW) provide an opportunity for enhanced return via increased risk exposure.

Eos recently went public via a SPAC acquisition. B. Riley Principal Merger Corp. II (BMRG) acquired EOS for $176 million and a pro-forma market capitalization of approximately $500 million. Each unit of BMRG represented 1 share in the newly formed company and one half of a warrant, which are trading under the tickers EOSE and EOSEW, respectively.

Eos Energy Enterprises is a battery manufacturer. It has developed an alternative chemistry to the well-known and widely used Li-ion battery. Li-ion batteries have lots of advantages, which is why they have taken off everywhere from mobile phones and laptops to electric vehicles. Among commercially viable options, Li-ion batteries are currently the most energy dense, measured in kWh/kg or kWh/m3, which makes them especially suited for any application where portability is the priority. When it comes to transport, they can’t be beaten. In fact, much of Tesla’s capital investments have been to increase Li-ion battery capacity to support its growing vehicle fleet. 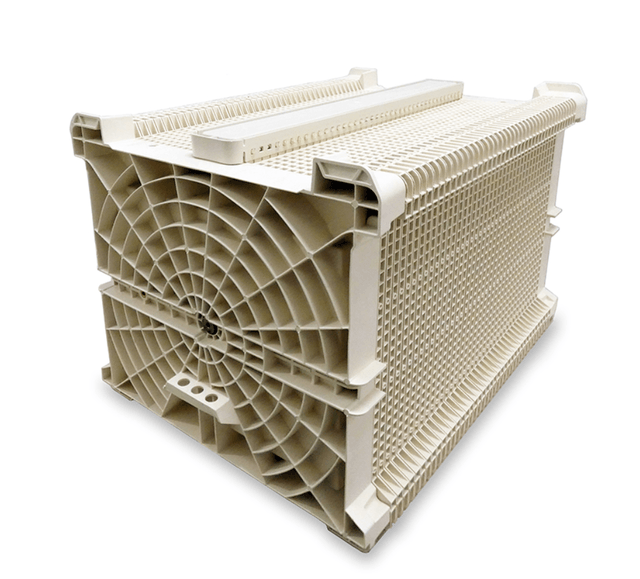 Fortunately for Eos, it isn’t trying to replace Li-ion batteries, but coexist alongside them. Its zinc-halide cathode batteries, which it has branded Znyth, are larger and heavier than Li-ion, but also cheaper and more flexible. If Eos were targeting electric vehicles, the company would be destined for failure, but for stationary energy storage and back-up power applications, it stands to outperform. The primary benefits to choosing zinc-hybrid over the incumbent technology for large scale stationary energy storage are:

With all these differentiators, I expect Eos to make rapid in-roads into the stationary energy storage market.

BloombergNEF is forecasting energy storage capacity to grow at 20% per year over the next 2 decades from 50 GWh in 2020 to 2,850 GWh in 2030. Put another way, in twenty years the installed base will be 50x bigger and require over $500 billion of investment to get us there. 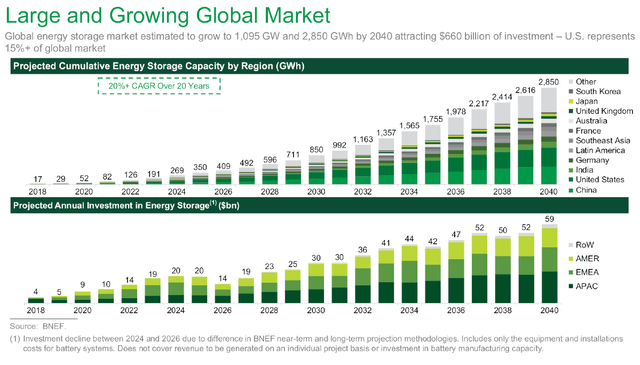 This growth is driven by the dramatic reduction in battery costs over the last decade, but also the growth of renewable energy. Accommodating increasing percentages of renewable power on the grid requires increased flexibility. While flexibility would have traditionally been met with natural gas peaker plants, it is now being increasingly provided by battery storage. In addition to reducing greenhouse gas emissions, batteries allow almost instantaneous response times and can improve grid reliability.

Similarly, data centers and other energy-intensive commercial and industrial customers are looking for improved power reliability. Power outages due to wildfires in California or hurricanes on the East Coast interrupt businesses at increasing frequency. Adding on-site battery back-ups enables business continuity and redundancy.

California has led the way with renewable energy standards and energy storage mandates. The latest California Public Utilities Commission forecast expects an additional 9GW of energy storage by 2030. Eos has already benefitted from this market, participating in two grants from the California Energy Commission that helped validate its technology in real world applications.

Finally, this market can expect a significant boost with the incoming Biden administration. The Biden campaign released a plan for 100% clean energy by 2050 and plans to invest $1.7 trillion in support of that goal (Biden Plans to Move Fast With a ‘Climate Administration.’ Here’s How.). That huge injection of capital will almost certainly support renewable energy projects – wind and solar. These are the same projects that benefit most from the addition of battery storage.

While Eos Energy Enterprises is a company without the commercial track record of Enphase (NASDAQ:ENPH), the incredible growth opportunities far outweigh the risks. I anticipate a stock price of $17-20 per share over the next 3-4 months, which represents 20-40% appreciation from today’s value. Upon achieving successful commercial scale production, Eos could easily be valued at $25-30 per share.

However, I believe the warrants are much more attractive than the equity from a risk-reward perspective. The warrants have a strike price of $11.5 and an expiration 5 years from the merger completion on November 16th. The warrants are effectively long-dated call options and will be much more volatile but with the potential for a far greater payoff.

Given my share price expectations above, this would indicate a warrant value of $6 to $8, or 80-120% appreciation in the short term. Similarly, successful commercialization will deliver a 5-6x multiple on any investment.

There are market precedents for both price forecasts.

While I am traditionally of the view that making short-term stock price predictions is a loser’s game, SPACs with exposure to renewable energy in any way have shown irrational exuberance this year. There is a plethora of drivers here, but most obvious are (1) zero interest rate environment and liquidity from the Fed, (2) the search for growth opportunities during a pandemic, (3) and the “Tesla effect” where retail investors view these equities as an opportunity to get rich quick.

The chart below highlights most of the renewable energy SPACs that have launched in 2020, the price prior to the deal announcement, price at business combination, and the price 3 months later. I have excluded Nikola (NKLA) and Fisker (FSR), as I don’t believe those companies’ performance is representative.

The average premium over the initial SPAC price was 41% after the deal announcement which grew further to a 116% premium today. EOSE is clearly the laggard in this group, and I expect the market to identify the company as deserving of similarly lofty valuations.

Enphase Energy can be a helpful comparison for what a successful Eos could look like. Enphase is also exposed to the renewable energy market but does not make solar panels or wind turbines directly. Its primary products are microinverters for converting the DC power of a solar cell into the AC power we use every day.

Enphase is currently trading 20 times sales with a market capitalization of $16 billion and annualized sales of $720 million. Enphase is a great example of the outsized valuations any company with exposure to the renewable energy industry can expect right now.

In summary, Eos Energy Enterprises is a newly completed SPAC in the red-hot energy storage sector. The current market enthusiasm for these companies provides a compelling short-term momentum play, as well as a long-term opportunity to benefit from a differentiated technology. On top of that, the availability of warrants lets more risk-tolerant investors enhance their returns.

Disclosure: I am/we are long EOSE, EOSEW. I wrote this article myself, and it expresses my own opinions. I am not receiving compensation for it (other than from Seeking Alpha). I have no business relationship with any company whose stock is mentioned in this article.