Units of Enterprise Products Partners (NYSE:EPD) have languished over the past year, losing nearly 40% of their value and unable to reclaim much of their February and March losses. While low energy prices and lower volumes are a challenge for just about every company in the energy sector, EPD is well positioned to endure this downturn, maintain its distribution, and gradually increase capital returns.

In the partnership’s second quarter (financials available here), EPD earned $0.47, which was a penny shy of consensus. This was down 15% from last year. Similarly, operating income was down 8% to $1.437 billion. As you can see below, apart from NGL fractionation volumes (due to several growth projects coming online), volumes largely ran below 2019 levels across most of EPD’s systems, which was the primary driver of the company’s lower operating income.

Now, importantly, EPD did see sequential improvement during the quarter. For instance, refining utilization is back up to 80% from 68% in April, which is relieving supply pressure on the fractionation business. Crude oil pipeline volumes are running at 80% of March levels, but management has said that gas and oil production volumes are rebounding after companies shut in production during the March and April oil price crash. NGL production at EPD plants has recovered from 88% to 98%. Thanks to new projects coming online, EPD’s system-wide fractionation volume in July is running at 107% of March levels, which should support increased absolute levels of cash flow in the second half of the year.

EPD’s diversified business model, beyond pipelines and fractionation plants, actually helped to cushion the blow from lower volumes because the company has significant storage assets. EPD saw increased demand for storage space as demand cratered amid lockdowns, and EPD even used uncontracted space to earn a modest income from contango opportunities for the company (i.e. buying March oil, selling the May contract at a higher price, and storing it in its facilities for two months).

Given the drop in operating income, distributable cash flow (DCF) came in at $1.577 billion, down 8.4%, from last year. Still, this provided 1.6x coverage of its distribution, leading to $597 million of retained DCF in the quarter and $1.2 billion in the first half of the year. Due to working capital builds, cash flow from operations covered the distribution by 1.2x, though these working capital flows should reverse in the second half of the year.

This quarter, even as reduced activity put downward pressure on EPD’s cash flow, the company still comfortably covered its distribution and generated significant excess cash. Indeed, over the past twelve months, the company has $2.7 billion of free cash flow. Going forward, recognizing that cash is king, management is looking to minimize growth capex spending, which, as it continues to build retained cash flow, could open the door to faster utilization of its $2 billion buyback program or accelerated distributions.

EPD Is Well Positioned For The Downturn

For several years, EPD has been moving into a more conservative posture. That decision has left the company with both the financial profile and business mix to endure this downturn without having to contemplate a distribution cut. EPD has declared a $0.445 payout for this quarter, unchanged from last quarter and 1.1% higher than last year.

As you can see below, three years ago, EPD made the decision that it would grow its distribution more slowly to retain more cash flow. The MLP always maintained some cushion between its cash flow per unit and its distribution, which allowed it to weather the 2014-2016 crisis better than many peers, never cutting its distribution. However, it wanted to cease any reliance on the issuance of equity to fund growth capex, instead funding it with retained cash flow. That is why, today, the company has a 1.6x coverage ratio. 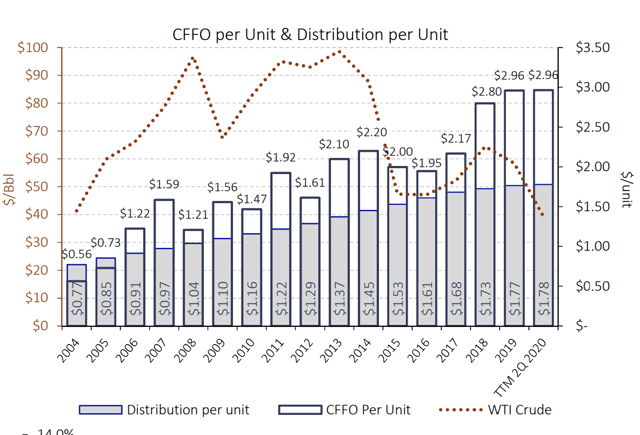 Thanks to this coverage ratio, even if cash flow is stressed 10% as has happened this past quarter or even further to 20%, it can continue to afford its distribution. Indeed, by driving down its growth capex budget, the company has less need to maintain such a wide buffer, giving it the capacity to accelerate distribution growth. Now, given management’s conservatism, I wouldn’t expect them to boost capital returns until there is more clarity about the pace of recovery, but this is a potential positive catalyst in 2021.

Additionally, EPD targets a relatively low 3.5x leverage level. Well, it currently stands at 3.4x for 12 months ended June. EPD’s balance sheet is in a healthy position, and the company has $7.3 billion of liquidity at its disposal. As such, it does not need to prioritize balance sheet repair and can continue to run a steady financial policy.

Alongside its conservative financial policy stance, it is important to note that the vast majority of the company’s business, over 85% in each of the past five years, is fee-based. The company has been steadily growing operating income and doing so without taking on significant commodity risk. While significant shifts in volumes will move profitability several percent, its cash flow is relatively predictable and steady. Because of this business mix, distribution coverage is likely to hover between 1.45 and 1.75x over the balance of the year into early 2021. 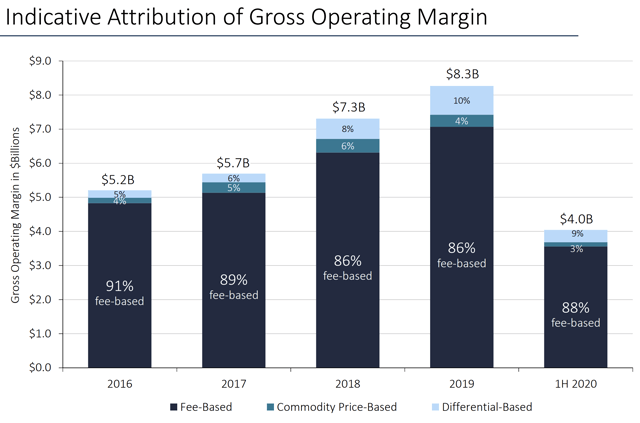 EPD was not immune to the COVID-19 recession, which has gravely challenged much of the energy sector. However, while its business was impacted, its conservative profile and diversified fee-based business profile helped to mute the impact. The benefits of conservative management often only show themselves during periods of crisis. We saw this in 2014-2017 when EPD was able to increase its distribution even as Kinder Morgan (KMI), Williams (WMB), and Energy Transfer (ET) either outright cut their distributions or used M&A transactions to effectively reduce payouts.

EPD currently offers investors a 9.73% yield. Given its strong coverage and stable balance sheet, this is a distribution that investors can feel very secure about. Additionally, with its growth capex budget coming down over the next two years, there is less need to generate $600 million of quarterly excess cash flow, which could permit an acceleration of distribution growth or larger unit repurchases in 2021. I view EPD as a core holding for income-oriented investors. Given the stability of its cash payouts and potential for faster growth over the medium term, I can see EPD moving up to $22-23, which would give it a more reasonable 8% yield.

Disclosure: I am/we are long EPD. I wrote this article myself, and it expresses my own opinions. I am not receiving compensation for it (other than from Seeking Alpha). I have no business relationship with any company whose stock is mentioned in this article.

Previous PostIt has ‘never been an alliance of equals,’ CDU party member & economist tells RT amid US plan to relocate troops from GermanyNext PostIs The Nasdaq About To Collapse Into A Gamma Vortex