Enel Américas S.A. (Enel Americas) (ENIA) provides resilience to the various shocks that might be presented by COVID-19 in the coming months. From both distribution and substantially green-power assets, ENIA has stakes in businesses whose product is essential to end-markets, and in the case of distribution substantially pre-ordained in revenue by government tariff schemes, where the first won’t be reviewed till 2022. Moreover, the distribution businesses are diversified by regulatory entities, where their concessions are spread across Colombia, Brazil, Argentina and Peru, with only 10% exposure in networks and generation to Argentina, the region’s most problematic economy. These businesses are a useful exposure for risk management even now during these trying times for LatAm. Because of the eschewing of the overall Enel (OTCPK:ENLAY) group by markets due to its inexplicable perception as a coal generator, it is possible to get exposure to these resilient LatAm cash flows at an expanded yield due to the compressed price. Below we explain why we think Enel Americas offers both a value and income proposition that investors should seriously consider due to an ignored ESG profile, diversified concession risks in distribution and a favourable share of solid LatAm geographies.

Norges Bank seems to unfairly think that Enel does not meet the requirements of ESG mandates, putting it in the same box as basic materials company Glencore (OTCPK:GLCNF), even though Enel and its subsidiaries, even Russian subsidiary Enel Russia which is phasing out coal at great cost, are essentially moving to a position of zero coal. Coal assets are becoming increasingly worthless in the EU save in Germany, where coal still garners popular support as utility prices don’t need to rise to finance the transition. Consistent with this, and the position of the Enel Group, ENIA’s coal exposure has fallen to essentially negligible levels around 2%. In the meantime, ENIA has taken advantage of the regional benefits, leveraging waterfalls that can be harnessed for renewable energy with some of the best energy economics of all renewable energy sources. Moreover, their substantial networks business is very resilient from a commodity perspective, with much of its income demand-decoupled. 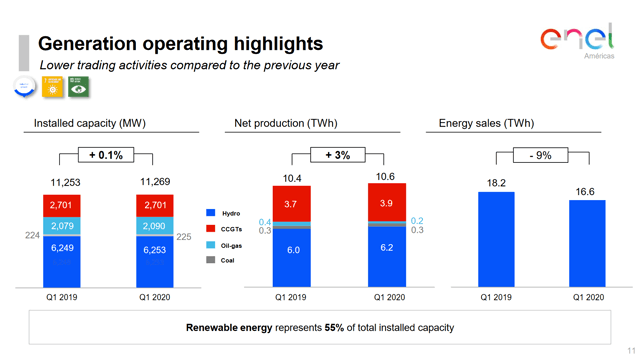 This defense against a growing concern for what many believe are existential risks from climate change is not being reflected in the value of Enel Americas’ assets. Applying relevant renewable comps to Enel Americas’ assets reveals the extent to which a change of perception could reprice the company.

Below we have comps of precedent transactions of renewable assets in Europe, where the European Union has made clear steps to instituting them as generation assets of the future.

Since the entirety of Enel Americas’ renewable power capacity is from hydro assets, we should apply the multiple from the recent ENGIE (OTCPK:ENGIY) acquisition of EDP (OTCPK:EDPFY).

Enel Americas also has a sizable distribution business, in fact it’s larger than its generation business. Distribution, as opposed to transmission, is a regulated utility concession that involves operating lower-voltage power within urban areas rather than between urban areas. Enel Americas operates several distribution networks within LatAm, including Sao Paulo and in major cities in Peru and Argentina. This business makes money on a deterministic tariff basis, mostly decoupled from demand. Since Enel Americas operates diversified distribution assets across LatAm geographies with similar economics to transmission grids, we will use the multiple on Red Eléctrica Corporación, S.A. (Red Electrica) (OTCPK:RDEIY), the Spanish grid operator, as a conservative comp due to the Spanish CNMC’s unfavoured perception by the investment community.

There is a lot of upside presented here, and it would be prudent to question why such upside would be unexploited. Clearly, one part of it would be risks associated with LatAm and emerging markets that investors might be wary of. Indeed, much of Enel Americas’ business is with these countries’ governments, known to be questionable on occasion. Moreover, some of these regions have internal conflicts, which in the past have been violent. Where there is not violent conflict, there is economic strife, such as in Argentina which is a hyperinflationary economy. Nonetheless, the multiples should be more or less reasonable, as the utility prices aren’t so different than in many developed economies with the exception of Argentina, where a highly interventionist government is the sole taker of generated power and subsidises almost the majority of the revenue of generation companies. Thankfully, this is also the most marginal market where ENIA operates.

Another reason might be technical related to the distribution business, which is that it is remunerated on a regulatory WACC basis. Compared to Red Electrica, the WACC for Enel Americas’ distribution assets is 2x the difference between a 6% WACC and a 12% WACC for the LatAm assets. Clearly, this implies more risk, and in a target multiple analysis it would scale down the multiple proportionately to something around 5x EV/EBITDA if used as a discount rate. But since a higher WACC also means a higher remuneration, as regulatory utilities are remunerated on a fair value basis, a lower multiple for the LatAm regulatory business compared to Red Electrica seems difficult to justify, especially when the regulatory risk might actually be higher in Spain due to the CNMC. Anyway, even applying the lower multiple in the regulated business would not eliminate the upside.

Although there are always going to be more risks with an EM investment, the massive forecast opportunity must imply some margin of safety. As seen with the regulatory business, the multiple could perhaps be halved due to the doubled required return or EM government exposure, even though discounting on the basis of regulator WACC would be fallacious as it is not related to Enel Americas’ funding conditions, which is better than the average LatAm company, nor is it related to the real business risk either. In order to eliminate the whole upside, you’d have to halve all the multiples across distribution and generation. Besides multiples, when taking a very sober look at an investment and its cash flows, the 7% dividend yield on Enel Americas seems safe due to the resilient business model, both in a COVID-19 environment and thereafter. There isn’t a particularly evident reason why this dividend would be that much more at risk on an equity basis compared to European counterparts which would yield substantially less. The business seems strong, backed by global player Enel as its parent and sponsor. With diversified assets, it seems a solid value and income proposition, worthy of consideration in an all-weather portfolio.

Disclosure: I am/we are long ENIA. I wrote this article myself, and it expresses my own opinions. I am not receiving compensation for it (other than from Seeking Alpha). I have no business relationship with any company whose stock is mentioned in this article.

Previous PostThe Four Horsemen Of Disinflation: The Coming Rent-pocalypseNext PostThe “Primary Subsource’s” Guide To Russiagate, As Told To The FBI