Endeavour Silver (EXK) released its Q2 2020 financial results. As expected, the results were heavily impacted by the coronavirus-related production disruptions. Endeavour’s mines were suspended for the whole of April, and production was restarted only in late May. However, all the mines are up and running now. Moreover, the gold price just reached a new all-time high above $2,000/toz, and the silver price is approaching the $26/toz mark. As a result, strong Q3 financial results should be expected.

In Q2 2020, Endeavour Silver produced 596,545 toz silver and 5,817 toz gold, or 1,061,905 toz of silver equivalent. Compared to the previous quarter, the gold and silver production declined by 30.4% and 31.4% respectively. Compared to the same period of last year, the decline is even more dramatic, by 43.7% and 39.1% respectively. As mentioned above, the dramatic production declines are attributable to the coronavirus pandemics. However, the mines are back in production, and their performance should return to normal in Q3.

What is positive is that, despite the production disruptions, Endeavour was able to suppress the production costs. The cash cost declined to $2.78/toz silver and the AISC declined to $14.91/toz silver. The cash cost reached its lowest level in more than 2.5 years, and the AISC declined to its lowest level since Q4 2018. This very positive development is attributable especially to improved performance of the Guanacevi mine, where mining of higher-grade ore began, and also to higher gold prices that resulted in higher by-product credits. As the production volumes should increase notably, and also the by-product credits should be significantly higher, the Q3 cash costs and AISC should experience another meaningful decline. 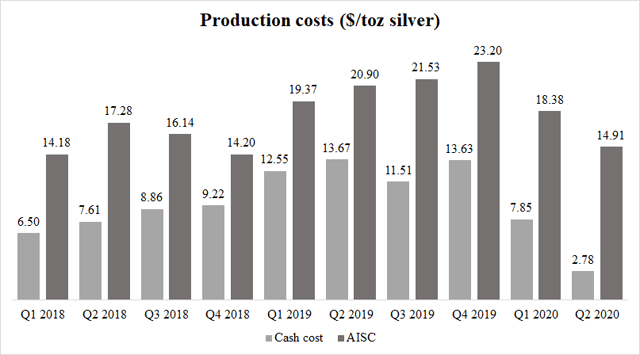 Although the average realized metals prices increased to $17.04/toz silver and $1,862/toz gold, which represents 11.2% and 14% growth compared to Q1, this fact was unable to fully compensate for the decline in sales volumes. As a result, the revenues declined to $20.2 million. It is 7.8% less than in Q1 and 31.3% less than in Q2 2019. However, the operating cash flow improved slightly, from -$2.3 million in Q1 to -$0.9 million in Q2. Also, the net income improved. While in Q1, Endeavour recorded a net loss of $15.9 million, in Q2, the net loss equaled only $3.3 million. The EPS equaled -$0.02. Although this was the ninth consecutive quarterly loss, it was the smallest one of them all. Moreover, there is a very high probability that this dark series will come to an end in Q3. 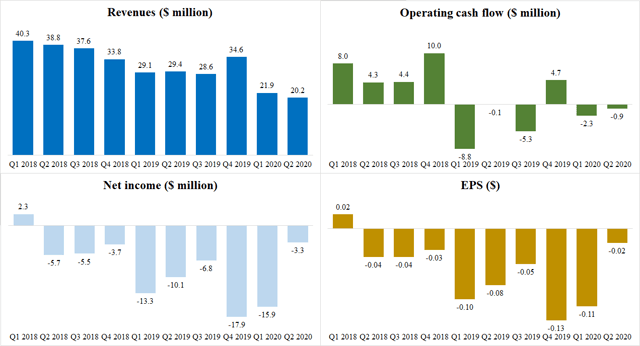 Endeavour’s cash position improved notably in Q2. The volume of cash, cash equivalents, and short-term investments increased from $15.1 million as of the end of Q1 to $30.6 million as of the end of Q2. Total debt declined slightly, from $12.6 million to $12.1 million. As a result, the net debt equals -$18.5 million. However, it is important to note that this positive development cannot be attributable to Endeavour’s operating performance, as the operating cash flow was negative. The company raised $22.703 million via equity financing. As a result, the share count increased by 8.63% in Q2.

Probably the most important event in Q2 (except the coronavirus pandemics) was the updated PFS for the Terronera project (although technically, it was completed in Q1, reviewed in Q2, and released in early Q3). What is important is that, although the statement included in the Q1 financial results news release sounded less optimistic, even a little scary, the recently released results of the updated PFS are positive (an article can be found here). To sum it up, Terronera should produce 3 million toz silver and 33,000 toz gold per year on average, at an AISC of $2.1/toz silver. The initial CAPEX is only $99 million. And at a silver price of $15.97/toz and a gold price of $1,419/toz, the after-tax NPV (5%) equals $137.1 million and the after-tax IRR equals 30%. However, at current metals prices, the after-tax NPV (5%) is over $300 million and the after-tax IRR is around 60%. 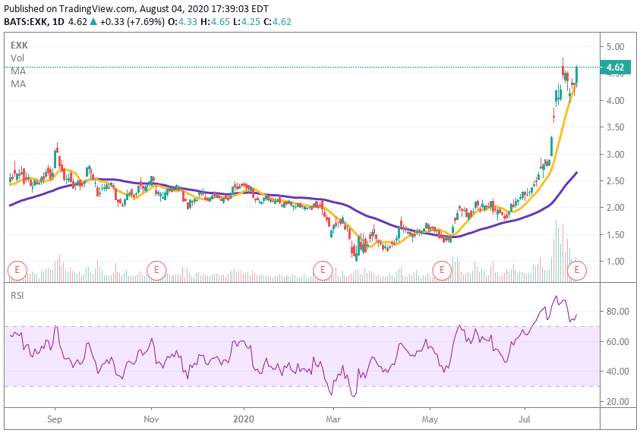 Endeavour Silver has had a crazy run. Its share price touched the $1 level back in March, and it stands at $4.62 now. Especially over the last month, the growth turned parabolic. And although the growing gold and silver prices may push Endeavour even higher, investors should be cautious. The expectations of positive Q3 are already baked in the share price. And the technical picture doesn’t look good. The share price and also the 10-day moving average are very far away from the 50-day moving average. The RSI has been deep in overbought territory since early July. And as can be seen in the chart below, the share price is approaching an old resistance level that dates back to 2017. This all indicates that a correction is very probable. 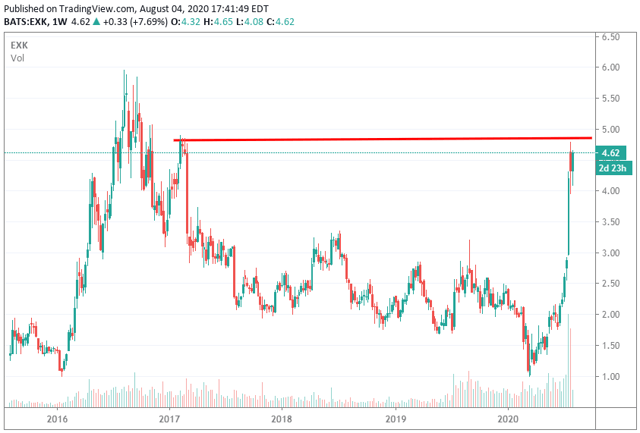