Just a brief background on the company, Empire State Realty Trust is a REIT with offices and retail primarily in Manhattan, NYC. Part of the company’s portfolio includes iconic buildings such as the Empire State Building and One Grand Central Place. The company’s property portfolio is weighted mostly toward offices at 93% with a small retail exposure at 7.0%. 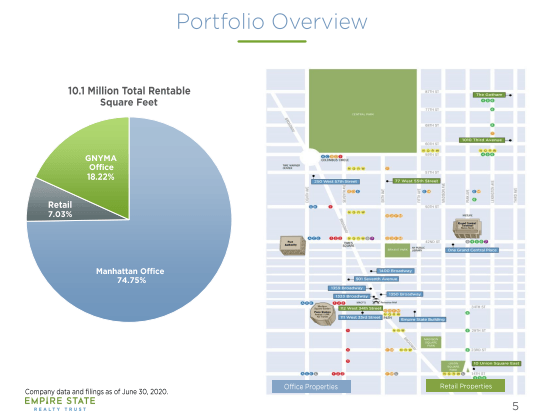 In terms of Q2 2020 results, the company’s revenue declined by 20% primarily being driven by the loss of the observatory deck revenue despite collecting 90% of total rent billings in July. The majority of uncollected rents were from its Retail properties of which only 75% were collected. The observation deck was closed during the majority of Q2 2020 and only opened in late July. As of the end of the reported period, the company has $873 million in cash against debt of $2.5 billion. The company’s debt has an average term to maturity of 6.9 years, so I am not too worried about its liquidity position. The company has also started cutting its general administrative costs, including reducing executive compensation. This will result in an $8 million reduction in yearly general administrative costs which is nice to see but against average yearly revenues of half a billion ultimately immaterial.

The company also recently announced that it is suspending its dividends for Q3 2020 and Q4 2020. The company’s stated reason is to “maintain balance sheet flexibility”. However, throughout the second quarter, the company has purchased $52 million of its common stock at an average price of $7.99. In total, YTD, the company purchased $119 million worth of stock at a price of $8.67. Given that the buybacks were done at prices roughly 36% above the current price may be a sign of either management’s poor capital allocation capability, or worse, the deterioration of NYC fundamentals.

New York City may be in an irreversible decline

I don’t want to get too political in this article, but I believe the management of the coronavirus crisis, lockdowns, and subsequent protests in NYC by the state and local governments has been pretty poor. The crime rate in NYC is trending upward as the criminal element has been emboldened by the inaction of local officials. The police who are supposed to keep these criminal elements at bay are handicapped by the political climate. Shootings and homicides have risen by 95% and 35%, respectively, compared to the same time last year.

The local NYC government has also continued to take a hard line on businesses, resulting in many these establishments still being closed despite the improving situation on the coronavirus cases. NYC Mayor de Blasio has stated that indoor dining may not reopen until 2021. This will have potentially permanent devastating effects for NYC’s cultural and food scene which was one of the main draws for working in and visiting the city in the first place.

“While many restaurants have been able to stay afloat during the summer months due to the availability of outdoor alternatives, the move isn’t a feasible option for all restaurants and won’t be an option for any come the fall. According to the NYC Hospitality Alliance, there are only about 10,000 restaurants utilizing outdoor dining out of roughly 25,000 total restaurants”

Wealthy New Yorkers have left NYC amidst the coronavirus pandemic and the rise in crime and closed businesses won’t incentivize them to come back. This will have negative domino effects for the city’s tax base which will result in even poorer government services. Amidst this exodus, the NYC mayor still wants to “tax the rich” ensuring this trend will not be reversed any time soon.

As mentioned in my previous article, the company’s overreliance on earnings from its observatory deck is a weak point. The company forecasts 35% observatory attendance numbers (compared to 2019) by the end of 2020 and a return to 100% by the end of 2022. However, I believe that management’s forecasts are too optimistic given what is happening in NYC. International tourism may return by mid-next year; however, the peace and order situation may deteriorate to a point where tourism takes a hit. The observatory made up 17% of the company’s revenue. 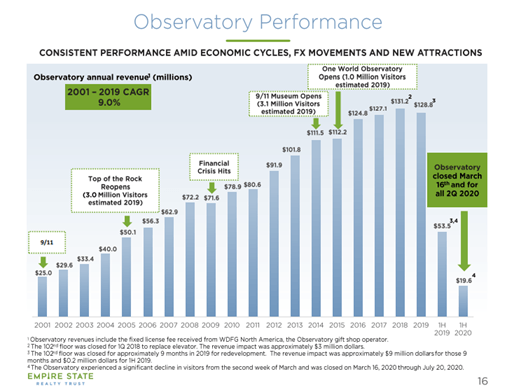 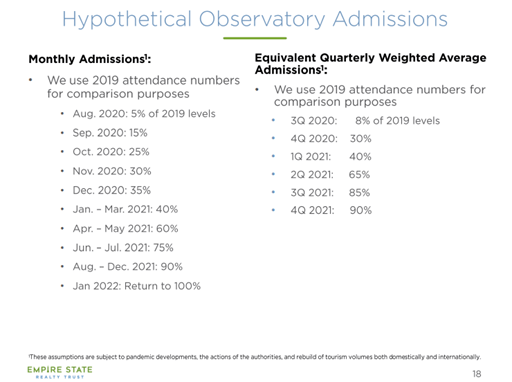 The increasing crime rate, especially violent crimes, will eventually affect demand for office real estate in the city which is Empire State Realty Trust’s bread and butter. The increase in crime is driving residents and businesses away from NYC. Furthermore, remember that NYC has some of the most expensive office real estate in the world. So, why would any business pay a premium to have an office in a city where workers are uncomfortable in, crime is high and restaurants are closed? This may result in moving offices away from NYC or continuing the current status of work from home indefinitely.

The company continues to have solid metrics with a net debt to a total market capitalization of 43.7% and net debt to EBITDA was 5.2x. However, my concern remains whether what we are seeing in NYC is a long-term decline. I worry that what the market is pricing in currently is a short-term headwind and that things will return to normal for the city. This may not be the case long term.

Analysts are forecasting an FFO per share estimate of $0.58 for 2020 which is 33% lower than 2019’s FFO per share of $0.87. At an FFO payout ratio of 50%, this implies a dividend of $0.29 per share and a yield of 4.5%. I don’t think the stock is expensive, but I don’t think it’s cheap either especially when the iShares Core U.S. REIT ETF (NYSEARCA:USRT) is yielding around 3.9% on a TTM basis. There is a chance that the stock could just remain as “dead money” from now till 2022. I reiterate my bearish call on Empire State Realty Trust.

Additional disclosure: Caveat emptor! (Buyer beware.) Please do your own proper due diligence on any stock directly or indirectly mentioned in this article. You probably should seek advice from a broker or financial adviser before making any investment decisions. I don’t know you or your specific circumstances, therefore, your tolerance and suitability to take risk may differ. This article should be considered general information, and not relied on as a formal investment recommendation.