Jeffrey Talpins, the founder of Element Capital, has wagered that the rally in global stock markets this year has gone too far, telling investors this week that he had moved the $16bn-in-assets hedge fund to take advantage of looming declines.

Element took what it characterised as a “significant short position” in stocks, focused primarily on European equities, according to a letter to investors on August 18 seen by the Financial Times.

Mr Talpins added that the fund had decided to short European equities given “less aggressive fiscal and monetary support” provided in the continent compared to other regions.

The move marks a reversal from the previous time Mr Talpins wrote to investors in March, when he began to shift the macro hedge fund to what he described as a “bullish” position in equities. The latest letter was sent on the day the US stock market hit a record high, having recouped all its coronavirus-era losses in a powerful five-month rally.

“We believe that the rally has now extended well beyond levels justified by the state of the economy, and with little regard for the myriad of risk factors looming on the horizon,” Mr Talpins wrote.

“This environment presents what may be the largest set of tail risks we’ve seen over the fund’s 15 years, and the odds of realising one or more of these events has multiplied.”

He added that the surge in stocks had pushed price-to-earnings ratios to levels not seen since the dotcom boom two decades ago.

Mr Talpins is among the most successful hedge fund managers in the US, charging some of the highest fees in the industry as a result. New York-based Element has averaged annual returns of 19 per cent since it launched in 2005 and has never reported a down year.

But in a macro investing field whose luminaries include Paul Tudor Jones, Alan Howard and Louis Bacon, Mr Talpins has kept a relatively low public profile. 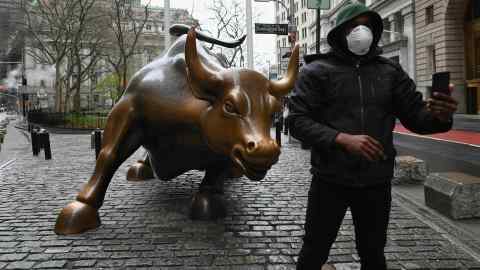 His fund has returned 3.7 per cent for the year to July 31, outpacing the average macro hedge fund, which returned 2.9 per cent in the same period, according to data group HFR. It returned more than 5 per cent in March and another 4 per cent in April, according to a person with knowledge of the matter.

The S&P 500 — the benchmark for US stocks — set a new record high on Tuesday, having gained 54 per cent from its intraday low, in March and is now up 4.5 per cent for the year. Stocks in Europe are up 38 per cent from their 2020 nadir.

Mr Talpins said that he could not foresee a specific event that would push stocks lower. However, the biggest risks were tied to the pandemic, and an acceleration in cases could prompt strict lockdowns again, “thereby crushing the economic recovery,” he warned investors.

“The risk/reward in equities is now heavily skewed to the downside.”