Election focus switches to Georgia in battle for Senate

Democrats and Republicans are quickly turning their attention from the presidential election to two run-off elections for the US Senate to be held in January in Georgia, which are set to determine who controls the upper chamber of Congress.

The two Georgia seats offer Democrats their last chance of controlling the 100-member Senate after their hopes of comfortably overturning the existing Republican majority fell short last week. A win in both for the Democrats would likely leave the Senate split 50-50, but the vice-president’s casting vote would tip the advantage to the Democratic side.

Democrats see a majority in the Senate as crucial for president-elect Joe Biden to push through his legislative agenda, on everything from healthcare to climate policy. Republicans are desperate to hold on in an effort to stymie a Biden administration.

As of Sunday afternoon, the Associated Press had called 31 of the 35 Senate seats up for grabs this election cycle and it looked likely that two of the remaining races — in North Carolina and Alaska — would be called for the Republicans, while the other two, both in Georgia, would head for a run off on January 5.

That puts a huge amount of power in the hands of voters in the southern state, where arcane rules mandate that races are decided in a two-candidate run off if no single candidate gets more than 50 per cent of the vote on election day.

Democrats and Republicans alike are expected to flood the state with donations, advertisements and on-the-ground volunteers. Andrew Yang, the former Democratic presidential candidate, said on Saturday that he and his wife would move from New York to Georgia to help with campaigning.

Republicans always win those run-offs. It will get a lot of attention, there will be a lot of money spent, but ultimately a Republican state is going to remain Republican

“This is our only chance to clear [Republican Senate majority leader] Mitch [McConnell] out of the way and help Joe and Kamala [Harris] get things done in the next four years,” he said.

Georgia has long been seen as a conservative stronghold — the last Democratic presidential candidate to win there was Bill Clinton in 1992. But changing demographics and a huge effort by Democrats such as former state legislator Stacey Abrams to engage African-American voters mean the state is now widely considered to be closely contested.

With ballots still being counted there in the presidential contest, as of Sunday afternoon Mr Biden was leading in Georgia by a margin of more than 10,000 votes, propelled largely by the support of black voters in and around Atlanta, as well as college-educated white voters in the suburbs.

Democrats say that makes them optimistic about the chances of their Senate candidates, Raphael Warnock, pastor of Atlanta’s Ebenezer Baptist Church, and Jon Ossoff, a 33-year-old political novice who narrowly lost a special election for a House seat in Georgia back in 2017. Mr Warnock will face Republican former Wall Street executive Kelly Loeffler, while Mr Ossoff is challenging GOP incumbent David Perdue.

“We know that there are enough votes in Georgia to elect Democrats. We are seeing it right now with Joe Biden. We just need to do all that we need to get those folks out on election day in January,” said Jaime Harrison, the Democratic candidate who came up short in his efforts to oust Mr Graham in the neighbouring state of South Carolina. 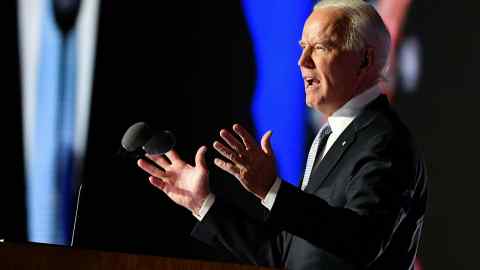 But Republicans warn that their candidates have historically had the upper hand in Georgia run-off races. “Republicans always win those run-offs,” said GOP strategist Doug Heye. “It will get a lot of attention, there will be a lot of money spent, but ultimately a Republican state is going to remain Republican,” he added.

Whit Ayres, a Republican pollster, said: “As a general rule, it has been more difficult for Georgia Democrats to get African-American voters back for a runoff.” But he added that having an African-American, Mr Warnock, on the ticket may add boost turnout among black voters, saying: “We will see whether or not those past trends hold. The dynamics are different this time, and the candidate is different.”

Billy Michael Honor, director of faith and civic organising at the New Georgia Project, another group founded by Ms Abrams to engage black voters, said he would be focused in the coming days and weeks in registering more voters, including young people who were turning 18 and therefore eligible to cast their first ballots.

“At the end of the day, it is really about how many voters you can connect with,” he said. “Our emphasis is going to be on how it is we connect with voters in meaningful ways around this election.”

Previous PostAOC vs. DNC: Ocasio-Cortez Threatens To Quit Politics, Slams “Hostile” Dems For Not Being Progressive EnoughNext PostHedge Fund CIO: “This Election Outcome Allows Everyone To Convince Themselves That They Were Right”