El Dorado Gold: What To Expect In Q3 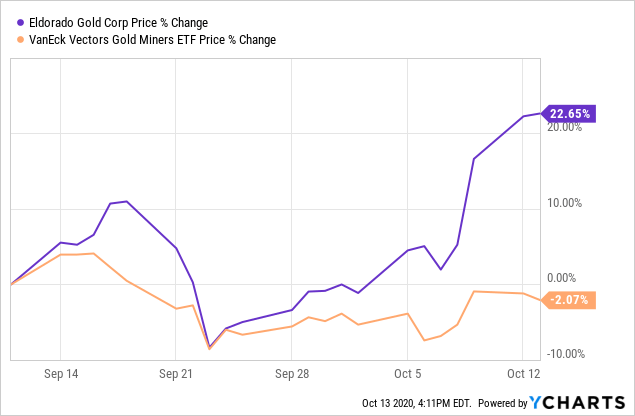 This is an earnings preview for El Dorado Gold (EGO), a mid-tier gold miner that has guided for 2020 gold production of between 520,000 and 555,000 ounces at $850-950/oz all-in sustaining costs. The company is the owner of four producing gold mines located in Canada, Turkey and Greece, and several development projects in Romania and Brazil.

Since my last coverage in early September, shares of El Dorado Gold have outperformed the benchmark VanEck gold miners index (GDX), returning 22.65% over the past month compared to a 2.07% decline in GDX.

After several recent positive developments, I think shares have only become more attractive to investors.

Here’s a look at what to expect from El Dorado’s Q3 2020 earnings, which are set to be released on Thursday, October 29, and other positive developments. 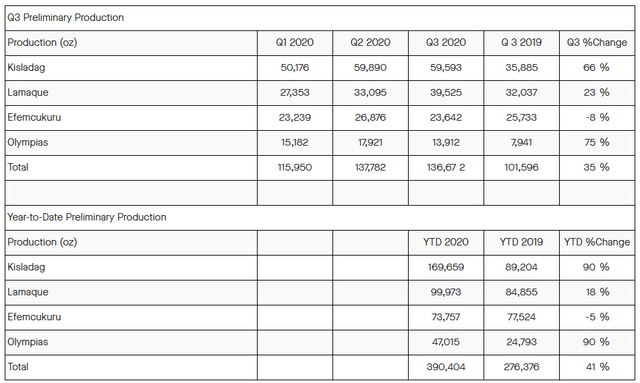 While production is essentially flat from last quarter, it is well above last year’s levels, and I expect a really strong earnings.

The biggest year-over-year gains came from its Kisladag and Olympias mines.

At Kisladag in Turkey, production rose 66% to 50,176ozAu, while at Olympias, output rose 75% to 15,182ozAu. Kisladag actually is performing as expected this year, but improvements are being made to increase capacity, which it will start to see in Q1 2021.

Olympias is seeing benefits of increased investments in mine development that have improved productivity compared to last year, and this is why production increased 75% year over year, according to the company.

The company’s Lamaque gold mine in Quebec had record production in Q3 due to a rise in tonnes mine per day and underground development into higher-grade ore. Lamaque produced 39,525ozAu in Q3, a 23% rise year over year.

For Q3, we already know that production will be down slightly from last quarter (by 1,000ozAu). However, we also know that the company’s average realized gold price will be north of $1,900/oz, well above Q2’s figure of $1,726/oz.

Finally, El Dorado ended last quarter with $440 million, and I think its cash position should exceed $500 million to end Q3 2020. The company ended Q2 with approximately $380 million in total debt, however, El Dorado announced on September 8 that it repaid $58.6 million of its senior secured notes.

Most of its remaining debt doesn’t mature until 2024, so the balance sheet is looking healthy.

El Dorado continues to trade at a low valuation despite the recent run-up in the stock price. The mining sector as a whole is undervalued compared to the price of gold (GLD), but El Dorado is particularly cheap compared to peers. I initially compared its valuation to peers back in early September, and I have updated that valuation in the below table. 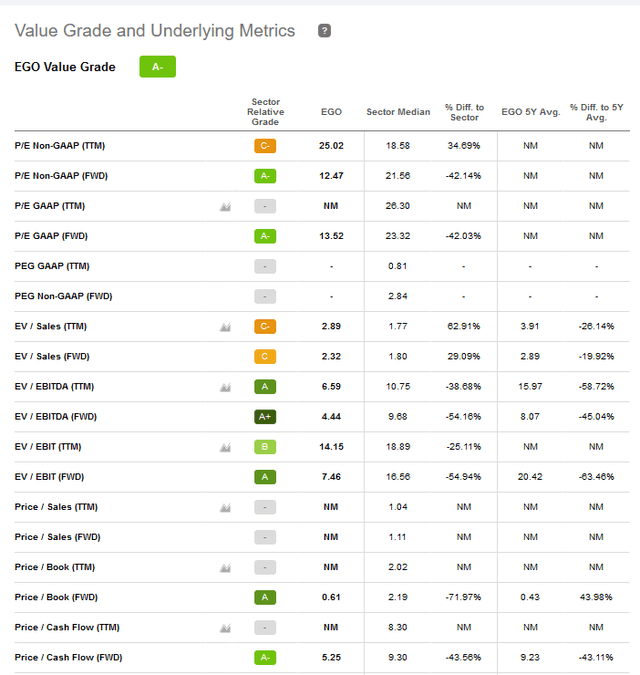 The stock continues to trade at a lower valuation compared to mid-tier mining peers such as IAMGOLD (IAG), Yamana Gold (AUY) and Alamos Gold (AGI).

I think the recent news that Greece has approved test drilling at El Dorado’s Mavres Petres deposit (part of the Stratoni silver-lead-zinc mine) is very bullish and bodes well for its other plans in Greece.

The company has the permits for its Skouries project in Greece, which is currently on care and maintenance with construction about half complete. El Dorado is in talks with Greece on a revised investment plan which would secure higher royalties from the miner’s development projects, including Skouries, and the miner is not moving forward with construction until a deal is reached.

Skouries is a gold-copper deposit that contains 3.8 million ounces of gold and 1.7 billion pounds of copper in reserves. The mine is estimated to produce 140,000 ounces of gold and 66.9 million pounds of copper annually at just $215/oz all-in sustaining cost, which would make this one of the lowest-cost mines in the world and a highly profitable operation.

Based on the feasibility study, Skouries carries a post-tax net present value of $925 million, using a conservative gold price of $1,300/oz and a copper price of $2.75/lb, and the value is actually closer to $2 billion using spot gold and copper prices (which is nearly the company’s entire current market cap).

With gold and copper prices rising and Greece’s economy suffering from low unemployment (17%), I think it is in both parties’ interest to get the project moved forward, and I expect a positive outcome.

I believe El Dorado Gold is a buy on any pullbacks ahead of its Q3 2020 earnings report. The stock is worth a buy based on its valuation, both from an earnings standpoint and the valuation of its future growth potential through its development projects – I feel the market is wrongly placing little to no value on the company’s Skouries, Tocantinzinho, Perama Hill or Certej projects.

Strong Q3 earnings and a potential agreement with Greece on the revised investment plan are catalysts for a re-rating.

Disclosure: I am/we are long EGO, AUY. I wrote this article myself, and it expresses my own opinions. I am not receiving compensation for it (other than from Seeking Alpha). I have no business relationship with any company whose stock is mentioned in this article.