Egyptian security forces have arrested a senior executive at one of the country’s most respected human rights organisations in a sharp escalation of the government’s crackdown on civil society movements.

Karim Ennarah, the director of criminal justice at the Egyptian Initiative for Personal Rights, was detained on Wednesday while on holiday on Egypt’s Red Sea coast and taken to an “undisclosed location”, his organisation said.

Amnesty International described the arrests as a “chilling escalation” of the government’s crackdown, saying it dealt “a heavy blow against the legitimate work of human rights defenders”.

Egypt, which was the first Arab nation to sign a peace agreement with Israel, has for decades been an important US partner in the Middle East and the government’s dire human rights record will be an early test of President-elect Joe Biden’s stated commitment to “defend the right of activists, political dissidents, and journalists around the world”.

Human rights groups said the arrests appeared to be connected to a meeting EIPR held with western diplomats to discuss human rights issues.

Since President Abdel Fattah al-Sisi seized power in a popularly backed 2013 coup that ousted Mohamed Morsi, the democratically elected Muslim Brotherhood leader, his regime has sought to crush all forms of dissent.

Tens of thousands of Brotherhood members and supporters have been detained, but the regime has also arrested several secular activists, academics, bloggers, journalists and businessmen. They are often charged with crimes related to terrorism, denied access to lawyers and face trials in military courts.

EIPR said that after Mr Basheer was arrested, he was questioned about the group’s work and the November 3 meeting between the organisation and “a number of ambassadors and diplomats, where the discussion revolved around enhancing human rights in Egypt and globally”.

It was not immediately clear what Mr Ennarah was accused of.

Mr Sisi, whose supporters credit for stabilising the country and reviving the moribund economy, has enjoyed good relations with western powers, with US president Donald Trump describing him as his “favourite dictator”.

Human rights groups have accused Mr Trump of turning a blind eye to abuses in the Middle East and emboldening the region’s autocrats to pursue ruthless crackdowns. Rights groups have urged Mr Biden to take a stronger line.

In a statement last month to mark the second anniversary of the murder of Jamal Khashoggi by Saudi agents, Mr Biden said he would “reassess our relationship with Saudi Arabia”, adding that “America’s commitment to democratic values and human rights will be a priority, even with our closest security partners”. 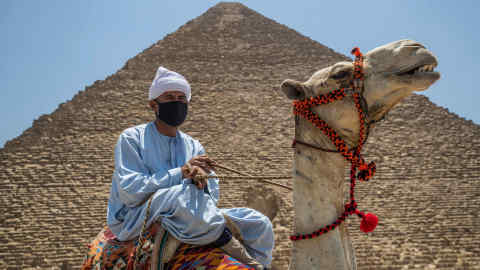 A day after Mr Biden declared victory in November’s election, Egypt hired Brownstein Hyatt Farber Schreck, a leading US lobbying firm on a $65,000 monthly retainer, according to a filing with the US justice department’s foreign agents registration act.

Hussein Baoumi, Egypt researcher at Amnesty, said the arrests of the two EIPR staff members were a “test” for Mr Biden, as well as the governments of the diplomats who attended the meeting with the organisation, which he said included Europeans and a Canadian.

“The arrests were telling them ‘you cannot be dealing with anything to do with human rights’,” Mr Baoumi said. “When they want to crack down they will test the water, arresting someone and . . . if there is no reaction, then escalate. It is a test . . . to see if they will call Sisi out about the crackdown and make it clear they will take serious measures.”

Previous PostThe Dystopian “Fourth Industrial Revolution” Will Be Very Different From The First OneNext PostNatural Gas: If The Weather Outlook Remains Bearish, We Could See $2.45 For January Contracts