Given the current Presidential administration’s bias towards fossil fuels, solar power may seem like a strange place for investors to look for opportunities, but stocks in the industry have easily outperformed the broader market over the last year. The Invesco Solar ETF, TAN, is up 58% over that time, easily beating the S&P 500, or any other index you care to mention. I guess that demonstrates a point that I often make. Politicians, and presidents in particular, have a lot less influence on markets than most people, and especially they themselves, think. Their policies are geared towards short-term political advantage, while investors look at long-term trends and consider their impact decades out.

Those long-term trends favor solar. The policies of any administration will change after at most eight years, but power companies look a lot further ahead than that. With the cost of solar power continuing to fall and greater efficiency, investment in the area continues, regardless of who sits in the White House.

However, not all solar companies are equal, at least in the short term.

Back in June, as news broke about an exemption from tariffs for bifacial solar panels, I wrote here that I liked the prospects of SunPower (SPWR) on the news rather than my usual go-to U.S. solar stock, First Solar (FSLR). That worked out even better than I expected. I said in that piece that SPWR could even double over time to hit its previous highs around $16. Not even I expected that to happen in two months though… 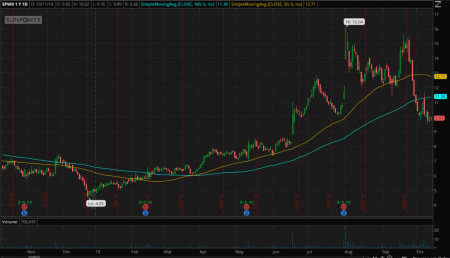 Meanwhile, FSLR has underperformed the industry, with the stock lower now than it was when I wrote that piece on June 6th. 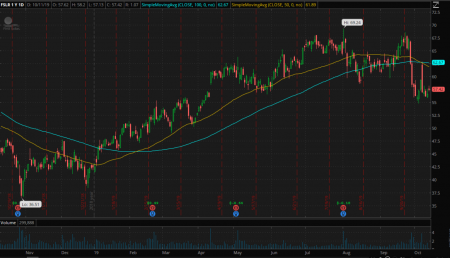 Solar is still, despite the long-term positive trend, an industry where things change quickly, and now FSLR looks like a better opportunity than SPWR.

As the trade war drags on, both sides are increasingly running out of things to tax, so it comes as no surprise that the exemption from tariffs granted to bifacial panels is being withdrawn at the end of this month. That gives First Solar a big advantage.

Bifacial panels are, as the name suggests, solar panels that generate power from both surfaces. They are seen by many as the future of solar power at the utility level, but obviously are not used in roof-mounted projects which, by definition, have only one side of the panel exposed to sunlight. What makes this a win for First Solar is that bifacial panels are currently manufactured only in China, so the 25% import tariff will discourage their use in current projects. It will also give the U.S. company time to catch up, so will have long-term advantages as well. The advantage of their focus on utility rather than small-scale domestic solar power is back in place.

The fact that the tariff exemption for bifacial panels has been reversed after only five months highlights one of the risks of investing in solar generally. The industry is sometimes used for political purposes, with grants and incentives coming and going as parties trade power. Over time, though, economics always beats politics and the economics of large-scale solar projects suggest that, with a little protection over the short-term, First Solar can go back to strong growth and the $80 plus highs of last April could be seen again before too long.