Financing costs for governments, households and businesses in the eurozone will stay “exceptionally favourable” until the economy recovers from the pandemic, European Central Bank president Christine Lagarde has said.

The ECB will use its emergency bond-buying and ultra-cheap loans to banks as the main way of controlling financing costs, she told the ECB’s annual forum on central banking, which is being held online for the first time this year.

The ECB president welcomed the “encouraging” news of a potential Covid-19 vaccine breakthrough that fuelled a market rally this week, but said the second wave of the pandemic still presented “new challenges and risks” for the eurozone economy.

“The key challenge for policymakers will be to bridge the gap until vaccination is well advanced and the recovery can build its own momentum,” Ms Lagarde said. “The ECB was there for the first wave and the ECB will be there for the second wave.”

After her comments the yield on Germany’s 10-year Bund dipped 2.5 basis points to minus 0.51 per cent. Bond yields fall as their prices rise.

The recent resurgence of coronavirus infections in many European countries and the partial lockdowns imposed as a result could have an even bigger impact on consumer and business confidence than in the first wave of the virus during the spring, she warned.

“Even if this second wave of the virus proves to be less intense than the first, it poses no less danger to the economy,” she said. “In particular, if the public no longer sees the pandemic as a one-off event, we could see more lasting changes in behaviour than during the first wave.”

Last month, the ECB said it would carry out a “recalibration” of all its monetary policy instruments and announce the results next month — raising expectations that it will inject more stimulus to counter fears of a double-dip recession in the economy.

On Wednesday, Ms Lagarde sent the clearest signal yet that the central bank would expand its pandemic emergency purchase programme (PEPP), which has bought more than €640bn of bonds, and its targeted longer-term refinancing operations (TLTRO), which have lent almost €1.5tn to banks at rates as low as minus 1 per cent. Most analysts expect it to extend both until the end of next year, adding as much as €500bn to its €1.35tn bond-buying plan. 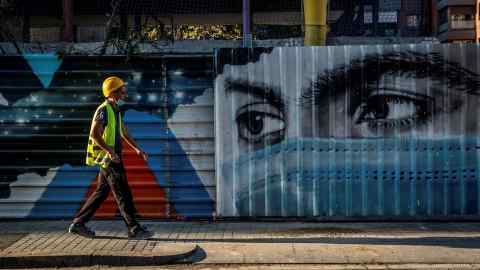 The ECB president said “all options are on the table”, but the PEPP and TLTRO had “proven their effectiveness in the current environment” and were “therefore likely to remain the main tools for adjusting our monetary policy”. That appears to rule out any further reduction in the ECB’s deposit rate, which is already at a record low of minus 0.5 per cent.

Stressing the importance of not only the level of financing costs, but also their duration, she said: “All sectors of the economy need to have confidence that financing conditions will remain exceptionally favourable for as long as needed, especially as the economic impact of the pandemic will now extend well into next year.”

“Demand weakness and economic slack are weighing on inflation, which is expected to remain in negative territory for longer than previously thought,” she added.

Some critics have argued that central banks and governments risk creating “zombie” companies by keeping unviable businesses alive. But Ms Lagarde said: “Concerns about ‘zombification’ or impeding creative destruction are misplaced, especially if a vaccine is now in sight.”

Previous PostOne Way Or The Other, Life In America Will Be The Same After This…Next PostIs This The Perfect Battery For Electric Vehicles?