A record-breaking 9m Texans have cast early votes, surpassing the total vote for 2016, as Democrats campaign on an anti-Trump platform that they hope will help them win the state for the first time since Jimmy Carter in 1976.

With a final day of early voting remaining, on Friday the number of early votes in the state had already overtaken the 8.97m that were cast when Donald Trump beat Hillary Clinton in the “Lone Star state” by 52-43 per cent four years ago. 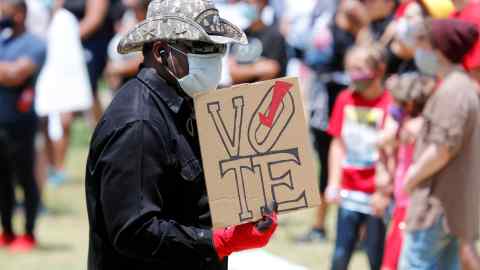 While there is no way to determine how many voters have cast ballots for Mr Trump and his Democratic opponent Joe Biden, a big driver of the record voting was Harris County, which includes Houston and its suburbs. In 2016, Mrs Clinton won the county, the third-largest and one of the most diverse in the US, with 56 per cent of the vote.

But there has also been record early turnout in some of the more rural, conservative parts of Texas making it very hard for experts to draw conclusions. Kamala Harris, Mr Biden’s vice-presidential running mate, will campaign in Texas on Friday, in another sign that the Democrats believe the Lone Star state is genuinely competitive this year.

Texans and Americans more broadly have been voting early and by mail in larger numbers during the pandemic to avoid crowds. Texas has been among the states that has seen a recent rise in coronavirus cases and hospitalisations.

Mr Trump has a narrow 2.5 point lead in Texas, according an FT analysis of polling data from RealClearPolitics, underscoring how the state has shifted since 2016.

Democrats in Texas and around the country have poured record amounts of money into the state, as the party attempts to win more seats in the US House of Representatives, an important US Senate race, and the fight to win back the majority in the Texas House that they lost in 2002.

NBC television this week changed Texas to “toss up” in the presidential race, in another sign of how the state has become a genuine battleground for the first time in decades. Mr Biden currently leads in the national polls and in every traditional swing state with the exception of Ohio and Arizona, where the candidates are tied.

Mr Trump would have no path to victory if he lost Texas, because the traditionally reliably red state awards 38 of the 270 electoral college votes that are needed to win the White House.

Many Democrats credit their gains in Texas to Beto O’Rourke, a former El Paso congressman who almost ousted Senator Ted Cruz in 2018 after running a two-year grassroots campaign across the state’s 254 counties in an effort to enthuse new voters.

Over the past year, Mr O’Rourke, who competed unsuccessfully for the Democratic presidential nomination, has run a group called Powered By People that is mobilising Democrats across Texas.

“Let’s bring this home. Reach out to every Texan you know this morning & help them make a plan to vote today,” Mr O’Rourke wrote on Twitter on Friday.