Author’s note: This article was initially released to CEF/ETF Income Laboratory members on February 28, 2020, before the markets crashed. We believe EIC is positioned well to weather this business interruption due to its relatively low leverage and participation higher in the capital stack of CLOs, and view this as an even bigger buying opportunity now than it was 3-4 weeks ago when initially written. This article was written by Alpha Male and edited by Stanford Chemist.

We’ve touched on Eagle Point Income Company (EIC) previously when it first began trading back in August 2019 (“New Kid On The Block: EIC“). We now have the first full-year results to sift through, and as I expected, the fund has picked up speed and is turning into one of the best closed-end funds, in my opinion, for consistent high yield with lower relative volatility, and should be that way for years to come.

We want to remind readers what this fund is about, as lately it seems any time the term “CLO” or “Collateralized Loan Obligation” is involved, it confuses people into thinking “they’re all the same” and lumping them all into the same category. First off, a CLO is just a vehicle created to hold a diversified pool of individual senior secured loans, then distribute those interest and principal payments not in an even, pro rata way, but instead, in a specific priority order. By structuring the priority of interest payments in this way, it allows the higher-rated tranches (AAA’s – A’s) to be safer investments and receive lower interest payments, while then giving a higher rate of interest to the lower-rated tranches, like the BBB’s and BB’s, in exchange for accepting more risk. The term more risk is relative, of course, because the BBB’s and BB’s still have the CLO Equity tranche (usually ~10% of the entire CLO) to protect them from any credit losses. To go a step further, the BB-rated CLO bonds are actually higher-rated than most of the underlying loans held in the portfolio, most of which are B. EIC provides a simple visual to understand what the structure looks like: 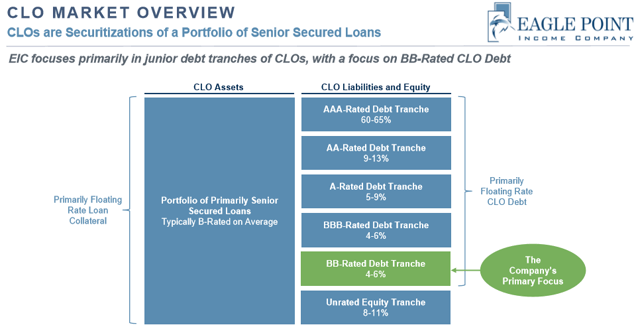 So, a CLO goes out into the market and sells these CLO Bonds and Equity tranches to raise capital (the stacked columns on the right), then deploys it into a portfolio of Senior Secured loans (the pool on the left). In this way, a CLO could be thought of similar to a standalone fund, but its investors are not all receiving the same distribution payments.

So, while the BB-rated tranches, the ones EIC is focusing on, seem to be near the bottom of the protection stack, they are historically very safe investments. Historically, the BB-rated CLO Bonds have not experienced any defaults since the CLO rules were re-written following the 2008 financial crisis (see previous EIC article for specifics). 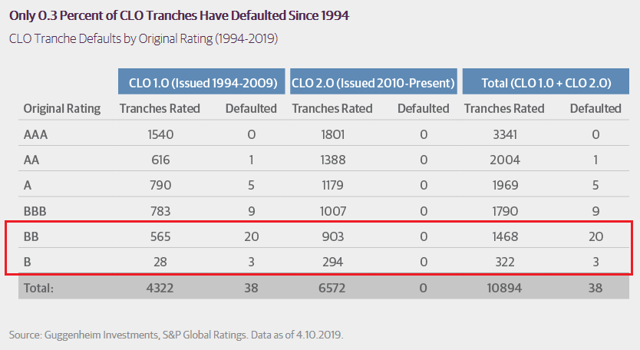 EIC posted a solid year, capped off with a strong Q4 (see “Q4 Quick Hits In The Closed-End Fund CLO Space“) that shows the fund picking up momentum. It is showing what it can be – a very reliable, income-producing fund with much lower volatility than its CLO Equity counterparts and a fully earned distribution (note, when I say “earned”, I actually mean earned with recurring portfolio income, not “covered with cash flows based on management’s non-confirming metrics that the fund makes up on their own”).

By holding CLO Bonds, the fund is clipping coupon payments from an underlying diversified pool of secured loans. Looking at the below chart from EIC’s investor presentation, we see that by holding CLO Bonds, you are able to gain 4-5% higher interest rates than just holding the leveraged loans directly (CLO Bonds in light green, Loans in black). Does this seem too good to be true? It sure does to the retail investor, but it’s how it has always been, because these are the types of investment products available to the wealthy and not the little, retail guy. With funds like EIC (and XFLT, to an extent) coming on-line, we get a taste of what the wealthy have been enjoying for years.

Even more so, the fund was able to achieve these results for the most part without any additional leverage. Remember, leverage in this case is seen as a positive thing, as it allows the fund to buy assets that earn more than double what it costs you to borrow the money to buy them. A real win-win, and a nice way for a fund to boost its overall earn on fund assets.

Towards the end of the year, EIC did draw on the facility it had put in place, somewhere in the $10-15 million range. However, we see in its subsequent events footnotes that it has increased its borrowings even more in Q1 ’20 to nearly $30 million. That news is very positive to me and will allow the fund to further grow its income per share going forward.

EIC is currently paying a monthly distribution of $0.1326 (or $1.60 annually), which equates to an 8.5% yield at today’s prices, which is nothing to sneeze at! At times, I think the other closed-end funds that hold primarily CLO Equity (ECC, OXLC, OCCI) have skewed the perception of distribution yield so that people aren’t thrilled with an 8-10% yield anymore. Everyone is entitled to their own opinion, but to me, an 8.5% yield from a fund that I view as being able to consistently earn that rate and potentially grow its NAV (I know, a strange concept!!) is welcome in my long-term portfolio anytime!

Next, EIC announced its taxable income has exceeded its expectations so much that it would need to do a special distribution to avoid penalties for under-distributing for the year. Who doesn’t like an extra, special distribution?? Not surprisingly, everyone gets excited when a fund announces special distributions, as it means two things – it boosts the yield in the short term once that special distribution is received, and it also leads investors to the conclusion that if this trend continues, the fund may either continue with specials (like a PIMCO or CSWC), or it may decide to raise the monthly rate altogether and save the hassle. Either way, this fund, which currently yields ~8.5% and has shown the ability to earn it and do so with a stable NAV, will now be in the 10% yield territory when you factor in the special distribution. This would be in line with a fund like XFLT, and I have no issue adding EIC to my mix of what I consider safer, high yield investments for the long term. More so, I would go as far as to saying I believe EIC will outperform ECC on a total return perspective over the next 5 years, despite paying a lower distribution.

READ ALSO  Remodelling the model - Can Chile reinvent itself? | The Americas

The exact dates of the special distributions were not announced, but you can be sure people will be ready to flood into the stock once the exact dates are announced, so better to stock up now.

I view this fund as a strong buy right now, and one that can be a cornerstone in a portfolio for years to come. Based on my personal experience working for a CLO manager, holding a levered portfolio of BB-rated CLO Bonds is one of the simplest and easiest strategies to manage for an experienced manager, and for the average investor, it can be a “set it and forget it” type of security. At its current discount, this deal may not last long once word gets out and people realize what a bargain it truly is!

At the CEF/ETF Income Laboratory, we manage market-beating closed-end fund (CEF) and exchange-traded fund (ETF) portfolios targeting safe and reliable ~8% yields to make income investing easy for you. Check out what our members have to say about our service.

Disclosure: I am/we are long EIC. I wrote this article myself, and it expresses my own opinions. I am not receiving compensation for it (other than from Seeking Alpha). I have no business relationship with any company whose stock is mentioned in this article.