This article was originally published on November 23

In this article, we take a look at the Wells Fargo Advantage Income Opportunities Fund (EAD), which looks attractive on a few fronts. It has a number of margin-of-safety features, such as its managed distribution policy which should allow it to begin raising its distributions around Q1 of next year, supporting the discount. The company is also trading at an attractive discount valuation, in some part due to the post-drawdown distribution cuts (a function of its MDP). It has sector-beating historical NAV returns across various time frames. And it has a defensive profile within the high-yield CEF sector in terms of rating quality, leverage and historical portfolio volatility. For these reasons, we have recently rotated into the fund in our High Income Portfolio. It should be said, however, that the fund is not without risk – it has a significant allocation to the B/CCC rating bucket with a sizable energy sector exposure.

EAD holds primarily high-yield corporate bonds with a handful of loans. Within the high-yield CEF sector, the fund has a relatively defensive posture. The fund’s leverage at around 26.5% – below the average of leveraged CEFs in the sector. It also holds about 47% in the lowest rated buckets of B/CCC versus an average of around 57% for the rest of the sector. The fund also boasts NAV drawdown and volatility that is marginally below the sector average. These defensive characteristics are appealing in a market environment of elevated valuations – as high-yield credit spreads have retraced around 85% of their widening from prior to the drawdown. With further capital gains less likely from here on, it makes sense for investors to take some chips off the table in a way that continues to generate income without taking on excessive risk.

EAD boasts NAV historical returns in excess of the sector average as well as the sector ETF benchmark. 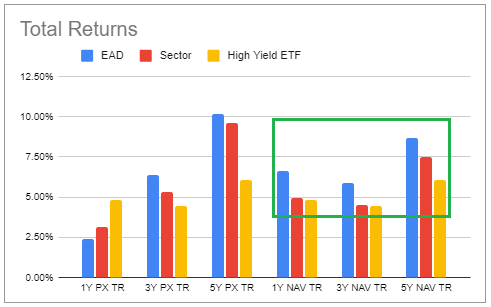 The fund’s discount is trading on the wider side of its historical relationship to the sector, making it attractive in relative terms as the following charts show. However, it is also attractive in absolute terms as well, as the fund boasts one of the lowest management fees in the sector at 0.6% on total assets (sector fees range from about 0.5% to above 1%). Along with its very low leverage costs of Libor + 0.65% as well as strong alpha, the fund’s discount should be trading tighter to the sector average rather than nearly 5% wider.

An interesting feature of EAD is its share repurchase program. Share repurchase programs are attractive features of CEFs for two reasons. First, they give fund managers the discretion to purchase the fund’s shares in the open market, supporting the fund’s price when its discount widens out. And secondly, the purchases are accretive to the NAV, which boosts returns for existing shareholders.

Repurchase programs, however, are not frequently established by funds, and even when established, are not often used when they are needed. This is because repurchasing shares lowers the fund’s assets under management, which has a knock-on impact of lower management fees.

An interesting question is whether it makes sense to repurchase shares during a drawdown such as the one we saw this March. Intuitively, this makes sense, since discounts tend to be widest during drawdown. For example, the discount of EAD widened to around 25% from trading in the range of 5-15% over the previous year. Operationally, however, this is a difficult trick to execute – discounts that wide only tend to last for a day or two, and they are only known the day after.

It is also difficult to target the discount itself – it’s not like the fund managers can put in a limit order for the discount. Yes, it’s possible for them to model the discount intraday (presumably through liquid ETFs, as many holdings outside of the highly liquid equities will tend to have stale prices) given they know the fund’s daily holdings (which we as investors do not), but the fund managers probably have better things to do with their time than to day-trade the discounts of their fund.

The other problem with repurchasing shares during a drawdown is that the fund will likely want to sell assets in order to fund the purchases. It is possible to instead borrow more cash, but that would require the fund to further increase its leverage even after its leverage would already be substantially higher due to the drop in asset prices. And the problem with selling assets is that liquidity tends to be poor during drawdowns and bid/offers wide, which can partially offset the benefit of the NAV accretion of buying shares back at a discount. It will also likely further push down the prices of assets the fund already holds and further elevate its leverage.

It’s not surprising, therefore, that EAD basically sat on its hands in March of this year and only repurchased a small number of shares in April. 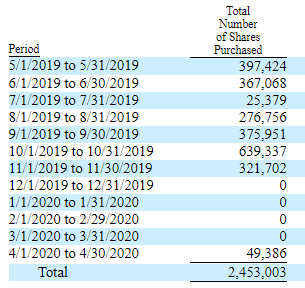 Overall, through EAD’s fiscal year ending in April, the fund repurchased 2.45 million shares, or around 4% of the total shares outstanding, which is quite sizable and shows that the fund doesn’t just talk the talk on the share repurchase program. The program added about 0.5% to the fund’s total return in the last fiscal year and about 1.5% in the previous year in terms of NAV accretion.

EAD has maintained a managed distribution policy since about 2019, where it makes a distribution set to 8% of the fund’s average monthly NAV over the past 12 months.

As we discussed in an earlier article, fund with MDPs can allow investors to anticipate distribution changes. This is particularly valuable for CEFs because distribution changes also tend to drive discount valuation. We can see this dynamic play out with EAD earlier in the year. The fund began to cut distributions shortly after asset prices collapsed due to the simple calculation of its MDP. Its discount differential to the sector widened out during the same time, from trading around 3% wider of the sector average to about 5% wider of the sector average. The low asset prices of March as well as Q2 are baked in to some extent, so distributions are likely to continue to decrease very marginally (because the NAVs from a year ago that fall out are not that much higher than current NAVs). This trend should stop and begin to reverse itself once the low NAVs of March and April fall out of the 12-month lookback window starting in a few months. 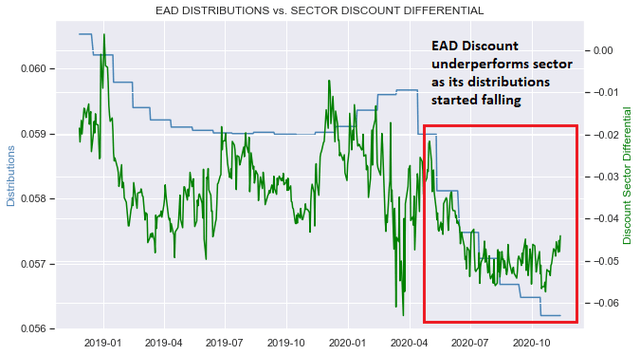 Despite the fact that distributions will continue to move marginally lower over the coming months, investors should no longer be as cautious in allocating to EAD, as its discount differential relative to the sector has stabilized and is no longer reacting negatively to the cuts.

It’s worth keeping in mind, however, that MDPs are not set in stone and can easily change. EAD’s borrowings of $230 million as of October 2019 fell to $163 million shortly after the March drawdown and have been scaled up to around $183 million since then. However, this still leaves the fund with about 7% fewer assets than before. This may cause the fund to get rid of its MDP and restrike its distributions lower at a flat level. We don’t think this is likely, however, at least not due to lower earnings. This is because the drop in EAD’s borrowings are largely offset by lower leverage costs, so we don’t expect its earnings level to drop materially. The fund’s floating-rate exposure is very small on the asset side, so the drop in short-term rates has only benefited it.

Overall, the fund’s previous fiscal year earnings cover about 85% of the current distribution. Since last year, however, its borrowings are lower, but leverage costs are lower as well, which should be roughly offsetting. Normally, investors worry about funds overdistributing because they are more likely to make a distribution cut. This is certainly possible for EAD, but it is less likely for a fund with an MDP like EAD. It is also less of a threat for a fund like EAD because it has been making distribution cuts over the last few months. The fund is also trading relatively cheap to the sector, so even if it gets rid of its MDP and makes a 10-20% distribution cut, it is less likely to suffer irreversible discount widening, since it’s already trading well wider of the sector average discount.

Investors have multiple ways to drive income in their portfolios in an environment of decreasing yields. They can take on additional risk and move into lower-quality securities. Alternatively – and this is why we like EAD – they can tilt to funds with lower expenses and tactically wider discounts, both of which combine to increase investor price yields without incurring additional risk.

Check out Systematic Income and explore our Income Portfolios, engineered with both yield and risk management considerations.

Read our Investor Guides: to CEFs, Preferreds and PIMCO CEFs.

Check us out on a no-risk basis – sign up for a 2-week free trial!

Disclosure: I/we have no positions in any stocks mentioned, but may initiate a long position in EAD over the next 72 hours. I wrote this article myself, and it expresses my own opinions. I am not receiving compensation for it (other than from Seeking Alpha). I have no business relationship with any company whose stock is mentioned in this article.