Dyson will invest an additional £2.75bn on developing technologies and products over the next five years, as the appliances brand pushes deeper into areas such as artificial intelligence, robotics and energy storage.

The company founded by billionaire James Dyson and famous for its vacuum cleaners said it intended to double its portfolio of products by 2025 and enter new fields, taking it “beyond the home” for the first time.

Although it did not provide any breakdown of the investments, they will be focused in Singapore, where the group controversially decided to move its headquarters last year, as well as the UK and the Philippines.

The announcement comes more than a year after Dyson abandoned its ambitious plans to manufacture an electric vehicle from scratch in the Asian city-state.

Sir James had hoped that the EV project would redefine his business but, after spending hundreds of millions of pounds, concluded that it was too expensive to compete against established carmakers.

“Now is the time to invest in new technologies such as energy storage, robotics and software which will drive performance and sustainability in our products for the benefit of Dyson’s customers,” he added.

The extra amount eclipses the roughly £2.5bn that Dyson spent on research and development and new products, including the abortive EV programme, between 2014 and 2020. 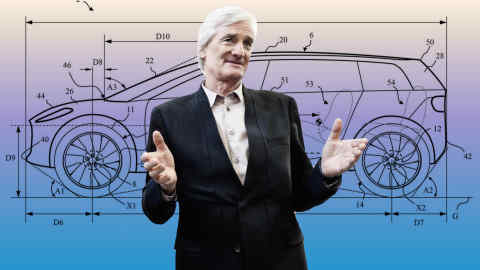 As part of the push, the privately-owned group, which blamed the effects of the coronavirus pandemic on cutting 900 jobs from its 14,000-strong global workforce earlier this year, will hire additional scientists and engineers. Some are likely to come from the higher education institute run by the company.

By focusing on software, AI and robotics, Dyson is going up against the vast resources of some of the world’s most valuable businesses.

Alphabet, the parent company of Google and London-based AI specialist DeepMind, spent $26bn on research and development in 2019, including staff costs, stock-based compensation, equipment and depreciation. Meanwhile, Apple’s R&D spending hit a new high in the year to September 2020, at $18.8bn, or 6.8 per cent of sales.

Among Dyson’s projects is a new dedicated software hub in the Philippines and an expansion of R&D facilities in Singapore, whose choice as the location for Dyson’s new head office attracted criticism given Sir James’s support for Brexit.

The company will also boost investments at its two UK innovation centres in Wiltshire, which employ more than 4,000 people.

A key focus will be the commercialisation of its proprietary solid-state battery technology, a form of power storage touted as safer and more energy efficient, along with research into motors, connectivity and material science.