Dynavax (DVAX) is ~15 months advanced on a restructuring that it announced back in May 2019. This article checks in on its progress and explains why I have so far resisted any thoughts of chipping in as an investor in this name.

The aforementioned restructuring flipflopped its prior strategy. Under the company’s new plan, it determined to focus on commercializing HEPLISV-B and to explore strategic alternatives for its immuno-oncology program.

How the worm had turned; back before the restructuring, HEPLISAV-B revenues were viewed exclusively as support for Dynavax’s immuno-oncology development, per the company’s 1/2018 presentation slide below: 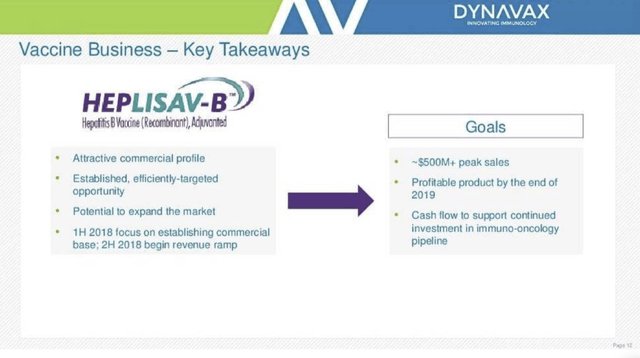 Based on a spot check of recent conference calls, Dynavax has not had a great deal to say about the status of this exploration of strategic alternatives for its immuno-oncology program. It has been a nagging question mark in my mind. On 8/3/20, the company finally announced a resolution in a press release headlined:

At last Dynavax has rid itself of this expense, exchanging it for a small down payment, a passel of biobucks and low-double digit royalties. Perhaps things will turn out well and TriSalus will prove to have been an inspired choice.

I am not counting on it for anything. Certainly, there was no more than a perfunctory mention of this deal by CFO Ostrach at the close of his brief financial report during Dynavax’s Q2 2020 earnings call, as follows:

I guess it should be no surprise that the company does not dwell on its old program. At this point, it is simply an embarrassing reminder of former aspirations that were never met.

Dynavax had a horrible time getting the FDA to approve HEPLISAV-B. It is hard to imagine a more star-crossed birthing. The company netted its first CRL way back in 2013. Thereafter, its efforts continued to stumble; despite Dynavax’s commitment to secure acceptance of a renewed BLA during 2016, its filing misadventures continued, culminating in a second CRL in 11/16.

Finally, in 11/17, Dynavax got its long delayed approval. The company has effectively communicated its advantages, as shown on overview presentation slide 7 (8/20) below: 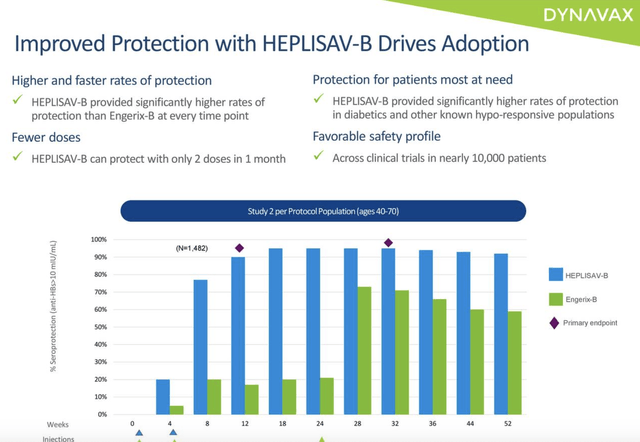 Of the four points of differentiation shown, the one I expected to be the most compelling driver is the dosing. As a consumer of vaccines, I intensely dislike those requiring extended dosing regimes. HEPLISAV-B requires two shots over a one-month period. Its entrenched competitor, ENGERIX-B (GSK), requires three shots given in a convoluted dosing schedule that invites noncompliance.

Its revenue trajectory has been positive, as shown by the slide below from Dynavax’s Q4 2019 earnings presentation: 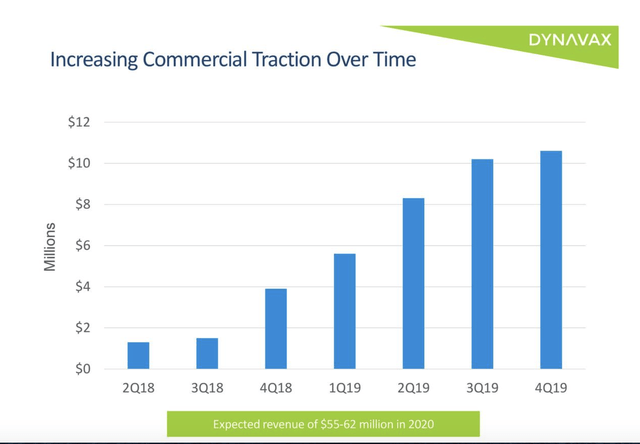 Thanks to COVID-19 disruption, the company’s revenue and operating expense lines from its Q2 2020 10-Q (p. 5) are generally skewed to the downside.

That said, its SG&A costs remain stubbornly high for both three- and six-month periods. With cost of sales eating up approximately half of product revenues, the additional burden of Dynavax’s SG&A expenses is particularly stark. Even when you set R&D expenses aside, the company’s turnaround is definitely a work in progress.

Dynavax relies on growing HEPLISAV-B while it builds out a dynamic role in adjuvants for various vaccinations.

The company’s 8/2020 corporate presentation provides a broad overview of its upcoming plans as follows: 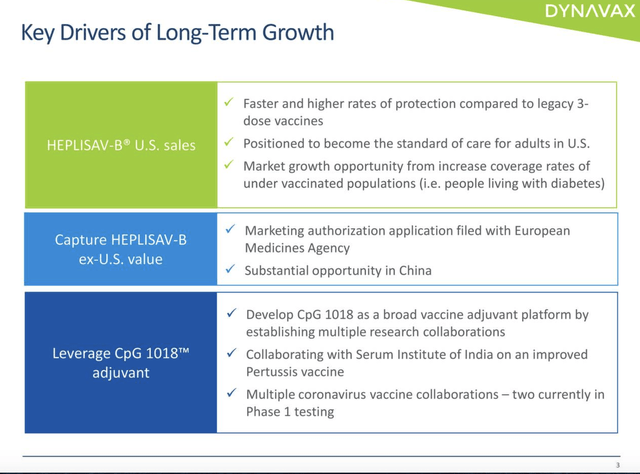 Dynavax is fully committed to its HEPLISAV-B-focused strategy. The company’s progress in its US growth plans is working to dodge the strong block of COVID-19, as discussed. I will not venture to guess how long this takes, however, it is not an attractive opportunity in a competitive biotech investing universe.

READ ALSO  Will Libya Really Flood The Market With Oil?

The approach of expanding HEPLISAV-B’s reach ex-US is exciting. However, when one scans Dynavax’s Q2 2020 earnings report, one wonders if this is truly a management priority or even a management consideration. CEO Spencer does mention in passing that there are over 250 million people infected with hepatitis B, only a small fraction of whom live in the US.

There is no discussion of any ex-US initiative. Truly, on 3/28/20, the European Medicines Agency (EMA) accepted Dynavax’s Marketing Authorization Application (MAA) for review of HEPLISAV-B. We heard not a whisper from management on this, and nothing about China either.

During the company’s Q2 2020 earnings call, management gave extensive color not only on US HEPLISAV-B revenue prospects but also on its CpG 1018 adjuvant, which seems to be its primary focus at the moment. Given the fact that COVID-19 has been so unkind to HEPLISAV-B revenues, it is understandable that the subject of adjuvants would rise in importance.

The company views this adjuvant as having a key role to play in combating a wide array of pathogens, as reflected in its slide below: 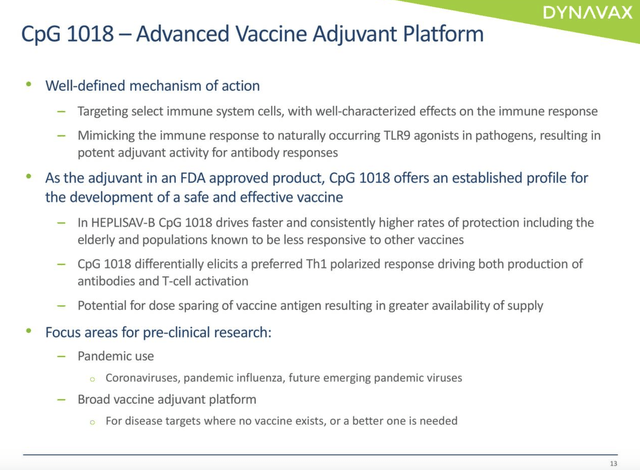 Dynavax’s CpG 1018 program has advanced to the stage that it has attracted a variety of collaborations, as disclosed on the following slide: 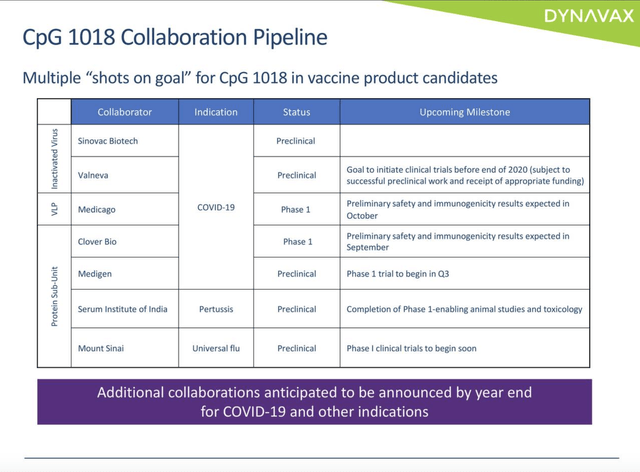 CEO Spencer is clearly a strong advocate of this tilt towards development of Dynavax’s adjuvant portfolio. He respects the important role that CpG 1018 has in enhancing HEPLISAV-B’s immune response. He recognizes its potential to serve as a broad adjuvant platform. The CEO is enthused by the partnerships the company has developed, as shown above, and anticipates more.

He sums up the situation as follows:

It is easy to share his excitement. Some investors may share the vision, see the possibilities and climb on board with an investment in Dynavax. Perhaps under different circumstances, I would join them. Under current circumstances, where we are dealing with an unproven management working to turn around a ship whose previous voyages have been choppy, I will demur.

Let’s take a look at some Dynavax metrics:

This is not a company that will likely reward shareholders, as it pursues an attractive opportunity without a clear path forward. The following earnings call exchange shows that Dynavax has yet to arrive at such a condition. 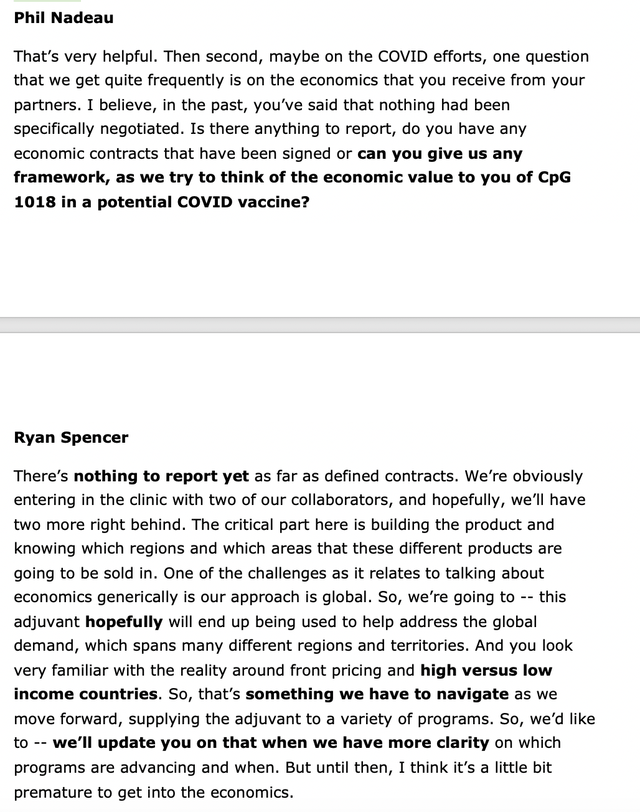 At the current time, I consider Dynavax to be in full-on “show me” mode. The company needs to show that it can bring its operational expenses down to a point that approximate its revenues. As matters now stand, it appears to be operating outside of any financial boundaries.

The company’s share count appears to be rising, as do its financial debt obligations. As I recall, its major financing is held by CRG. I will not soon forget how that turned out for Synergy (SGYP-OLD) when its fortunes deteriorated.

There is no reason to currently cast Dynavax in such straits; however, its CRG loan now rests at $180.9 million (p. 16). It is due on 12/31/23. If financial conditions deteriorate over the next few years, the company and its shareholders could get squeezed.

In my view, Dynavax is currently an unattractive speculation. I intend to keep a close watch on the company over the months to come. CEO Spencer’s enthusiasm for Dynavax’s prospects in adjuvants has me intrigued. At some point in the next year or so, I may easily reverse my current viewpoint. I do not expect that to occur until I see both a credible path to (i) achieving revenues growing to match expenses and (ii) retiring the CRG loan.