Dynatrace (DT) reported solid quarter with revenue coming in ahead of consensus estimate by $5.5 million or 3.7% beat and EPS beat of $0.03 or 30% ahead of estimate of $0.10. The company also guided ahead of estimates for both 2Q21 and for the full year fiscal 2021. Company guided F2Q21 revenue in the $159-$161 million range or at the midpoint $6.0million ahead of prior consensus estimate of $154 million and EPS was in the $0.09-$0.10 range versus prior consensus of $0.10. Despite guiding up, we still believe the estimates are conservative and a repeat beat and raise is in the offing when the company reports results in October, making the stock a buy in our opinion.

More importantly, the Annual Recurring Revenue is up 39% Y/Y and is driven by addition of new logos (85 this quarter) and up-sell of more products to its existing customer base. Impressively, the ARR per customer is now $229K, up from about $200K last year. The company believes this could be north of $1million, if the company is able to sell more products to its customers. With the company mainly selling Application Performance Monitoring tools, we believe the opportunity to sell additional solution sets such as Information Monitoring, Digital Experience Monitoring and AIOPS remains high. CEO John Van Siclen noted that many enterprises are looking to consolidate multiple point products which are not only costly to buy in these tough macro economic times, but also difficult to manage. In addition, multiple point products do not give full visibility into the entire stack, given that data is siloed by various products.

Mr. Van Siclen on the earnings call noted that Digital Transformation continues to accelerate in many enterprises driven by mandated work from home and the movement of workloads to the cloud. Mr. Van Siclen pointed to a survey conducted by Fortune Magazine in May, noting that “75% of CEOs anticipate accelerating their digital transformation projects” this year. Digital Transformation makes the IT systems much more complex since enterprises are using hybrid-multi-cloud strategy to run their applications. This means that some applications for instance are running in Amazon (AMZN) AWS, Google (GOOG) GCP or Microsoft (MSFT) Azure and some applications still remain on-premises. On top of this, enterprises are also using newer software technologies such as Containers, Kubernetes clusters to orchestrate the Containers, in addition to traditional virtualized applications. All of these mean complexity and if an application running on such a infrastructure has a bug, it is very difficult to debug and get to the root cause of the problem. In such a scenario, having a single tool that can be deployed both on premises as well as on various clouds that can handle both containerized and non-containerized workloads is essential. This is what Dynatrace does very well. Please refer to more details about the capabilities of Dynatrace in our past write up on SA.

In terms of Net Expansion Rate, the company believes that it can exceed 120% going forward, driven by increasing cross-selling of its other solutions in its portfolio. The company noted that 44% of its customers now own 3 or more modules it currently sells. Finally, the company believes it can add about 450 net new customers for the remainder of the year. In the current quarter, the company added only about 85 customers, but that could be due to company focusing on servicing its existing customers as they migrate to WFH following mandated shutdown. Net net, we believe Dynatrace is one of the best positioned monitoring companies in the industry.

Risks of investing in Dynatrace

Dynatrace is fairly expensive (trading at 12.4x EV/C2022 sales) when compared to SaaS/Subscription peer group that is trading at 14.7x. In the event of a sell-off in the market due to external factors such as macro economic weakness, Dynatrace stock could move down more than its peers. In addition, any spending slowdown driven by macro or other shocks to the business environment could also impact revenues and earnings. In addition, some of DT’s competitors such as Cisco (CSCO) and Splunk (SPLK) have bigger balance sheets. These companies can use their balance sheets to sell their products at a discount, even at losses, forcing DT to match the prices. This price matching could impact revenue growth and earnings, triggering a sell-off in the stock. In addition there may be other risks that are less likely to occur in our view or which we may not be able to currently anticipate.

What to do with the stock?

Despite the company reporting solid numbers, the stock is only up about 3% today. I would have expected the stock to be even higher than what it is today. This may be due to the company only guiding to 2Q EPS in line to slightly lower than consensus. The company also noted that it expects to invest aggressively in R&D, Sales and Customer Success roles for the remainder of the year. This might have spooked the investors a bit, given that the company noted that its operating margin for the remainder of the year would be lower than what the company reported in 1Q of 32.7%. Given our confidence in technology and potential to gain share against incumbents, we believe the lukewarm response for solid results provides a great opportunity to own a quality name that is tied to digital transformation. 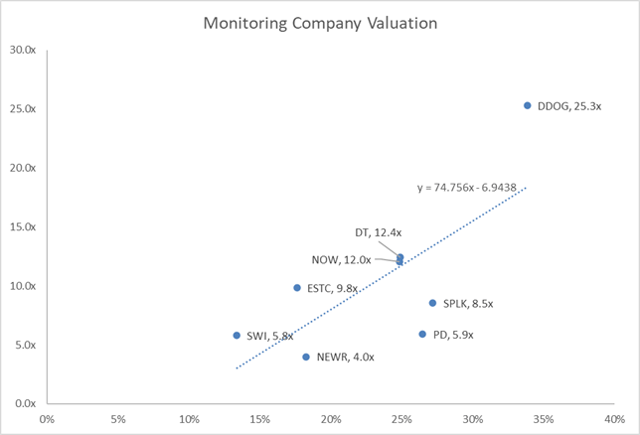 DT is currently at 12.4x EV/Sales versus Datadog (NASDAQ:DDOG) that is trading at 2x the multiple of DT. We believe multiple expansion for this name is possible as the company continues to execute on new logo addition, maintain its Net Expansion Rate above 120% and beat and guide up for the rest of the year. The company is hosting an analyst day in September at which time the company is likely to lay out plans to reduce leverage, use of cash and its plans going forward. Given that it is impossible to predict how high the valuation might go, and due to increasing volatility in the markets, a safer way to buy this stock is in small increments and over time.