It’s been just over a year since Mike Salvino took the reins as CEO of the troubled DXC Technology Company (DXC). Salvino, known for his leadership in the remarkable turnaround of Accenture’s (ACN) business process outsourcing (BPO) unit, was tasked with a similar goal of stabilizing DXC’s flailing business and returning it to growth. At the outset, he outlined three focal points of his turnaround playbook: customer focus, cost optimization, and seizing opportunities to cross sell services.

The first year of his tenure has largely been spent on the first goal of improving service to stem the loss of contracts and to retain its customers. At the beginning of the year, DXC had been working to repair relations with 40 “challenged accounts” which had been at risk of moving away from the company. By the end of Q2 (calendar Q3, as the company’s fiscal year ends in March), 38 of the 40 had been deemed “fixed.” This is evident in DXC’s contract backlog, which has seen book to bill ratios above 1 in three out of the past four quarters. The exception was fiscal Q4, when COVID-19 lockdowns pushed some contracts into the following quarter, resulting in a book-to-bill of only 0.9X at the height of pandemic uncertainty. 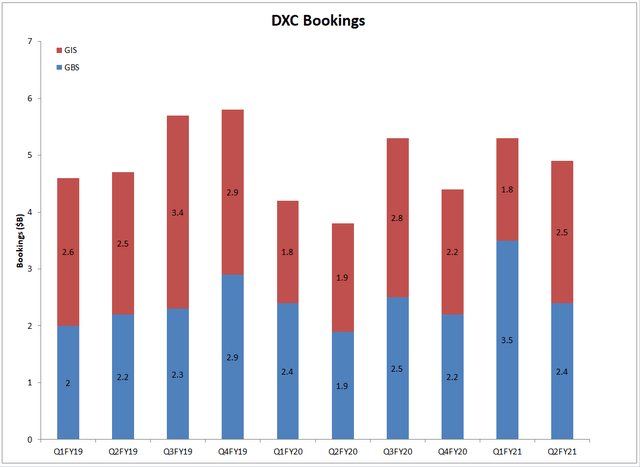 In fact, aside from the temporary delay in contracts due to business uncertainty, the pandemic may very well have played a role in reinvigorating DXC’s business, as many of its customers relied on the company to transition them to work-from-home environments and bolster their IT infrastructure to accommodate more online business. The company’s renewed focus on service certainly helped it earn goodwill from its customers. A desire to cut costs should drive more outsourcing business to DXC in the near term, and the heightened need for digital and cloud transformations to remain competitive should be a tailwind for the company in the coming years.

DXC also completed its strategic review, opting to retain its Workplace & Mobility and Horizontal BPS segments, while moving forward with the sale of the State & Local HHS unit (which closed right after the quarter ended) and the Healthcare Provider Software unit (which should close within a few months). As a result of the HHS sale, the company has significantly reduced its leverage ratio, with pro forma total debt now at $6.2 billion and a cash balance of $3.1 billion (i.e., $3.1 billion net debt). The Healthcare Software sale ($525 million) should bring in an additional $425-450 million after tax, further reducing debt levels.

The trend of declining revenues seems to be nearing its end, as DXC has largely worked through the contract terminations and price concessions made in prior quarters. While the company is guiding for lower revenues in the upcoming quarter ($4.15-4.2 billion vs. $4.55 billion in the most recent quarter), this is almost entirely due to the sale of the HHS segment, which contributed about $1.4 billion annually, or about $350 million per quarter. Additionally, guidance for margin to remain flat in the 6.0-6.5% range (compared to 6.2%) should be considered a win, as the HHS unit had higher margins than DXC’s other businesses. On a like-for-like basis, this guidance implies a 200 bps improvement in margins.

Speaking of margins, now that DXC has stabilized its customer base, the company is turning to cost optimization, with a goal of streamlining its management structure to take out $700 million in costs ($550 million during fiscal 2021). Compared to current run-rate Adjusted EBITDA of about $1 billion annually, this represents a 50%+ improvement in margins if everything makes it to the bottom line. This implies a return to ~10% EBITDA margins, which is comparable to pre-pandemic rates and should be easily achievable. 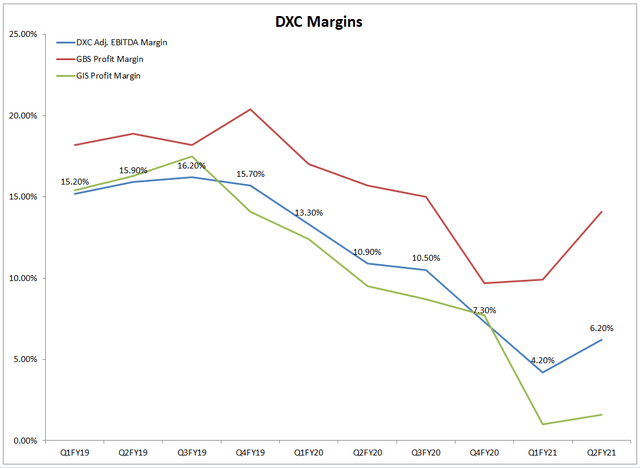 What does DXC as a company look like moving forward? My current base-case assumption is a run-rate of $16.4 billion annual revenues with 9% Adjusted EBITDA margins, which I expect to be achieved within the next 6 months. This takes into account the already closed sale of HHS and the soon-to-be-closed sale of Healthcare Software. Though the unit economics of Healthcare Software have not been disclosed, I am applying a sales multiple of 2.5X, which, based off the $525 million price, implies annual revenues of about $200 million. Additionally, I am assuming that a combination of cost savings initiatives ($550 million expected to be achieved by end of FY21) and winding down of pandemic-related expenses results in margin expansion to 9%. This should be achievable, as the company has already improved margins by 200 bps sequentially and is guiding to another 200 bps improvement on a like-for-like basis in the upcoming quarter. Continuation of these trends should result in margins in the 9-10% range within a couple quarters. The improved earnings profile, combined with proceeds from divestitures, should drop the net leverage ratio below the company’s targeted range of 2X.

The bull case scenario envisions a company returning to revenue growth and expanding margins into the low to mid-teens. This scenario is supported by DXC’s record of contract bookings, which totaled $19.9 billion over the trailing twelve months. Even backing out ~$1.6 billion for the divested units and adding some wiggle room for delays or cancellations, there could be somewhere in the range of $18 billion hitting the company’s top line over the next 12 months. As far as margins go, DXC was capable of 15%+ margins only a couple years ago. Although it is questionable whether that was sustainable in the long term, 12% is certainly plausible considering that the company’s cost savings program is expected to continue into FY22. In this scenario, leverage would drop well below targeted levels, and the company would likely consider acquisitions for growth or shareholder returns.

Based on its current run rate, DXC is trading at an EV/EBITDA multiple of about 8.7X, which appears slightly undervalued compared to its peers, which mostly trade in the 9X-13X range. However, if margins recover and the base-case scenario is achieved, the current market cap would imply an EV/EBITDA multiple of only 5.5X, indicating close to 100% upside to trade in line with peers. 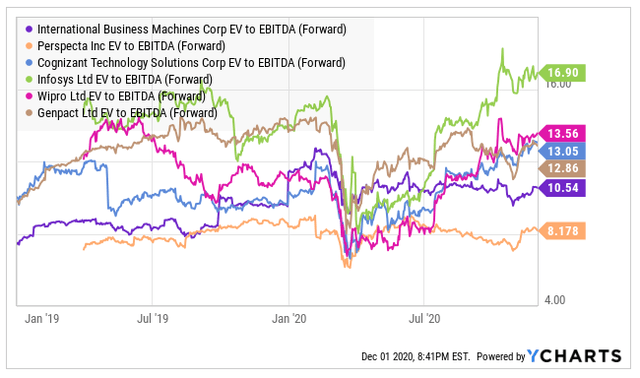 While the second wave of the pandemic and associated lockdowns may delay revenues or contracts, I do not view this as a large risk, since most companies have already developed contingency plans for business continuity during the initial outbreak, and the services DXC provides are increasingly essential for operating in this environment.

The primary risk to the thesis is in execution, as DXC needs to rein in costs while maintaining customer satisfaction. Given a reasonable amount of time, the base case should be easily achievable. All of its peers report double digit operating margins, so DXC should be able to as well. Revenue trends should stabilize given the recent book-to-bill ratios, and debt levels are no longer a pressing concern. All that remains is to restore profitability (given the GIS segment’s most recent profit margin of 1.6%, that is not a very high bar to clear) and look towards opportunities for growth.

Disclosure: I am/we are long DXC. I wrote this article myself, and it expresses my own opinions. I am not receiving compensation for it (other than from Seeking Alpha). I have no business relationship with any company whose stock is mentioned in this article.