A significant number of major energy companies have publicly announced an environmental goal of Net Zero Carbon by 2050, many within the last few months. These include both Duke Energy Corporation (NYSE:DUK) and The Southern Company (NYSE:SO).

This is a change.

In August 2019, Harvard Law School hosted a forum on Corporate Governance, Net-Zero by 2050: Investor Risks in the Context of Deep Decarbonization of Electricity Generation. They state that:

Of the twenty largest U.S. publicly traded power generators, which collectively account for nearly 50% of the electric power sector’s CO2 emissions, only one (Xcel Energy) has committed to a net-zero by 2050 target. 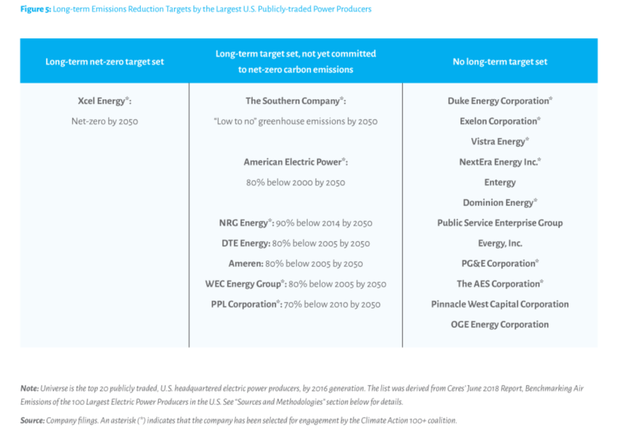 It’s worth reading the whole report to get a sense of the forces lining up to influence utility and energy investment policy. This is increasingly reflected in institutional investor preferences and investment policies.

The UN-based Net-Zero Asset Owner Alliance, for example, is a group of 30 institutional investors, dominated by pension funds (e.g. CalPERS) and insurers (e.g. AXA S.A.) publicly committed to a Net-Zero investment portfolio by 2050.

The Climate Action 100+ investors group representing $47 trillion in assets, including BlackRock and PIMCO, has targeted 161 companies to push for net-zero emissions by 2050. About 50 of these companies have made some form of commitment.

The question from institutional investors is likely soon going to be “why don’t you have a Net Zero Carbon goal” rather than “why do you need one”, i.e. it’s going to become a requirement.

Net Zero Carbon is going to become an important driver and constraint on important investment and operational decisions for utilities and many other companies. For the larger utilities, hundreds of billions of dollars of capital investment are on the table.

The ability of the company to manage this complex evolution is going to have a major impact on long-term company performance. Engagement by senior leadership is going to be an important way to assess management performance.

More speculatively, I think the advantages of scale in this environment are likely to drive consolidation among utilities.

Duke appears to understand the issues, has a well-developed plan to succeed, and is taking proactive steps to implement it. This may be an opportunity rather than a problem for Duke.

Duke Energy Corporation is the largest regulated utility in the U.S., with operations in six states. The slide below summarizes key metrics. 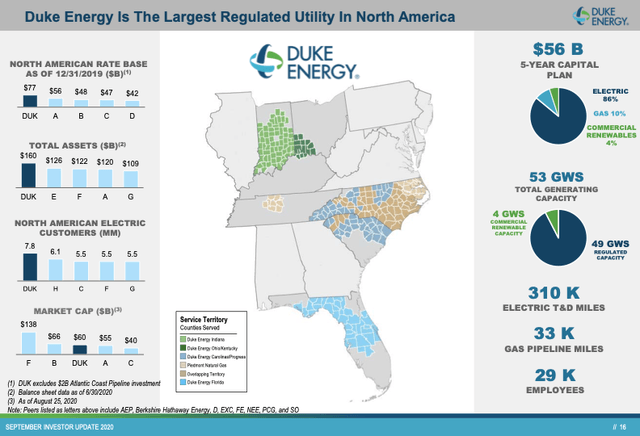 In September 2019, Duke announced a goal of achieving net-zero carbon emissions from electricity generation by 2050, with an interim goal of a 50% reduction from a 2005 baseline by 2030.

Duke is one among a growing number of utility and midstream companies that have announced net-zero by 2050 goals in the last year or so. We will take a look at what this might mean for Duke, and by extension, some of the other utilities.

The Greenhouse Gas Corporate Protocol Standard considers seven greenhouse gases and three emission “scopes”. The emissions of most concern to a utility like Duke are CO2, CH4 (methane), N2O, and SF6 (used in electrical equipment).

Scope 1 emissions are from activities directly under the company’s control (facilities, vehicles), Scope 2 is purchased electricity purchased by the company for their own use or for resale, and Scope 3 is everything else, including for example natural gas burned by a customer to heat their home. Most companies are focused on Scope 1 and 2. 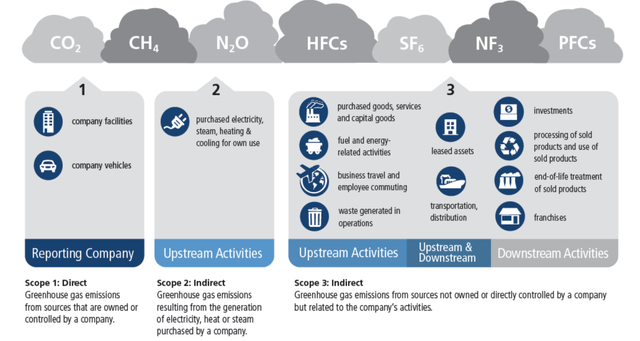 If you are a utility like Duke, with a number of power plants, you have a major Scope 1 concern, and it’s almost certainly your dominant concern. You may have other Scope 3 concerns as well, e.g. the diesel burned to harvest and transport the trees for your power poles, or the methane leaked from the interstate pipeline that supplied your natural gas.

If you are a Duke customer, you may have a Scope 2 concern regarding how the electricity you purchased was generated. From a greenhouse gas perspective, you would prefer to buy electricity generated from solar or nuclear rather than coal.

To provide a sense of scale, Duke estimates 2019 Scope 1 emissions (all in CO2 equivalent tons) at about 93,000 for power generation, 185 for methane from natural gas distribution, and 535 for SF6 from equipment.

The greenhouse gas “scope” concept was developed as a reporting framework for the Greenhouse Gas Corporate Protocol Standard in 2001. The standard comes from the World Resources Institute/World Business Council for Sustainable Development and is being increasingly widely adopted.

Getting to Net Zero Carbon

Some of the discussion of getting to net zero carbon brings this cartoon to mind.

Duke has made a significant effort to define the exact nature of the miracle in the cartoon above and put together a plan to achieve it.

Duke presents two charts that summarize its current plan, shown below. The first shows the evolution of generating capacity by source. Capacity is summer nameplate capacity, i.e. the maximum output under optimum conditions.

The second shows the evolution of electricity actually generated by source. 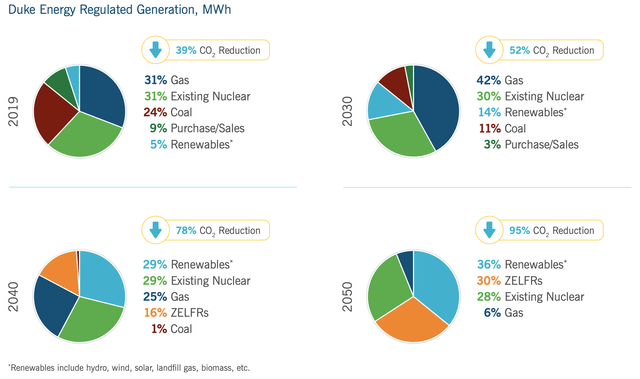 These charts reflect a great deal of information, and to understand Duke’s plan, and the plans that other utilities might make, it’s important to understand some key points. The comments below all relate to Duke’s plan.

Generating capacity is not a 1:1 match to power actually produced. This may reflect physics (the sun doesn’t shine 24/7, nor does the wind blow), equipment constraints (maintenance and fuel cycles), or policy (choosing not to run gas except when other sources are unavailable).

READ ALSO  CD Projekt: Not For The Faint Of Heart (OTCMKTS:OTGLF)

The ratio between actual power delivered and maximum nameplate capacity is called capacity factor. Typical capacity factors are about 90% for nuclear, 40% for wind, 20% for solar.

For example, natural gas here will be 23% of capacity, but meets only 6% of demand, because the gas plants will be intentionally idled much of the time.

Nuclear power is critical. Duke plans to extend the license and operation of its existing 11 nuclear power plants beyond 2050. This is required to provide reliable base load power.

Duke expects to utilize existing nuclear plants to meet 28% of electricity demand in 2050.

Renewables will be the largest element of both capacity and power production. With an allocation of 44% of capacity, they will meet 36% of electricity demand.

These are largely solar and wind, but include hydro, landfill gas, and biomass. I wrote recently about the potential for Renewable Natural Gas from landfill and biomass here; on a grid scale, it’s small.

New ZELFR (zero emitting load following resource) capabilities are required. ZELFR is a placeholder for one or more as yet unproven future technologies which can operate on demand for extended periods, days to weeks. Duke expects ZELFR to meet 30% of demand.

It is modeled here as 50% small nuclear reactors and 50% combined cycle generators burning hydrogen or natural gas with carbon capture and storage. Duke’s plans envision deployment starting by 2035 (to allow retirement of other sources).

Buy the final 5%. The final step is purchasing Renewable Energy Credits to offset emissions. Duke estimates this will be about 5%.

In September 2020, Southern Company also adopted a goal of net zero by 2050, with an intermediate 2030 goal of 50% reduction in CO2, i.e. the same as Duke. Its expected nameplate capacity for 2050 is shown below. There are considerable similarities with the Duke plan. In addition to a very large role for solar, there is a large role for natural gas, a large role for carbon capture, and a significant role for nuclear power. 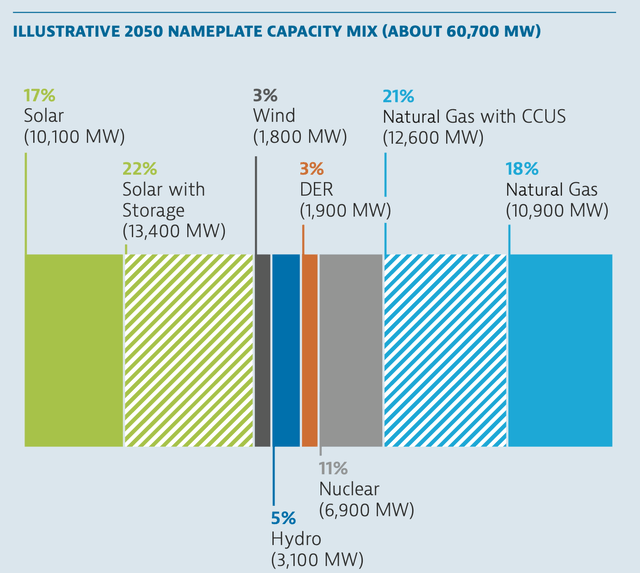 Duke’s service area has cold and dark winter mornings. This slide illustrates the problem of relying entirely on solar. Of course, a lot of other utilities, particularly outside the Sunbelt, will have the same problem. 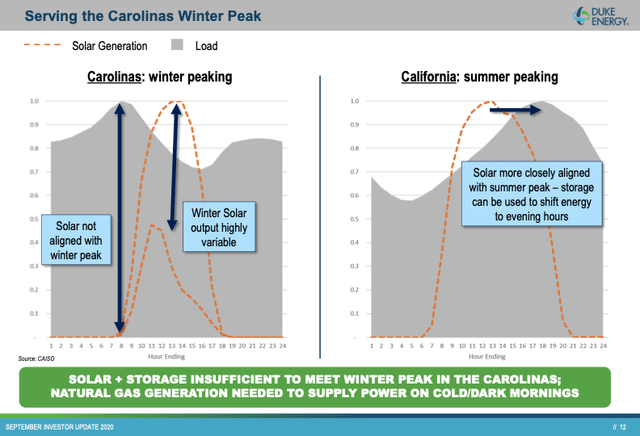 The net zero carbon issue is reaching a tipping point. Every utility is going to come under increasing pressure from both institutional investors and major clients to commit to a goal of net zero carbon by 2050. Actually achieving net zero is going to be a heavy lift for many utilities.

Duke provides a fairly detailed and sophisticated look at what this means for a major utility.

Interim goals, in Duke’s case a 50% reduction in CO2 by 2030, from a 2005 baseline will be relatively easy to meet. Duke has already retired 51 coal-fired plants, and replacing coal with natural gas reduces CO2 emissions by about 40%. In fact, Duke has already achieved a 39% reduction in CO2 vs. 2005 levels. To reach the 50% target, Duke will retire most of its remaining coal capacity, increase natural gas, increase solar and wind, and introduce some energy storage.

The remaining 50% will be harder. Duke will make very large investments in solar and wind, ~ 40 GW, and in battery storage, 12 GW. Despite this, in 2050, Duke still expects to meet 28% of electric demand with the existing nuclear fleet and 30% of demand with yet-to-be-commercialized new technology. Natural gas will still be required for peaking. Finally, the last five percent will be achieved by purchasing some form of carbon credits.

Thirty years is a long time. There are risks, and the details of the plans will certainly evolve.

There are significant regulatory policy risks. Both state level Renewable Energy Portfolio laws and federal level regulations are likely to become more stringent. The licenses for nuclear plants must be renewed and extended.

There are significant technology risks. The plan depends on new technology still in the lab or prototype phase, modular nuclear reactors, commercial-scale carbon capture, and hydrogen.

There are execution risks. This plan requires Duke to add new generation capacity – for decades – at more than double the historical rate.

There are significant financial risks. Very large amounts of capital will be required, and rate-based cost recovery will need to reflect that. Some assets could be stranded.

Considerable additional transmission and distribution capacity will also be required to connect the new solar and wind sources to the grid and increase the ability to move power as needed.

Duke’s management appears to understand the net zero carbon issues and risks, is engaged, has a plan to succeed, and is taking active steps to implement it. I believe this may provide a significant advantage for Duke.

My take on Duke is positive. I view Duke as a bit over fair value today; I would look for an entry point 15% below the current $97 price. It goes on my watch list.