During the current COVID-19 crisis, the Work-From-Home (WFH) has become one of the essential investment themes. Businesses such as Zoom (ZM), Slack Technologies (WORK), which are facilitating WFH activities, have seen their shares surging much higher in the stock market. However, Dropbox (DBX), another company that also benefits from the WFH trend, has not had similar share price growth. With the growing business performance and free cash flow generation, we think Dropbox is undervalued now.

Dropbox grows along with the COVID-19 WFH trend, turning profitable

In the first quarter of 2020, Dropbox has been growing at a decent rate. Its revenue experienced an 18% year-over-year growth, from $385.6 million to $455 million. Excluding the foreign currency exchange impact, the year-over-year growth would be higher at 19%. Its annual recurring revenue (ARR) increased by 16% to $1.86 billion. The revenue growth was mainly attributable to the growth of paying users and average revenue per user (ARPU). At the end of March 2020, Dropbox’s total number of users jumped to 14.6 million, while the ARPU reached $126.30.

The COVID-19’s WFH trend has accelerated Dropbox’s growth in both paying users and revenue. The company has seen much higher levels of engagement and collaborative activity. Since the middle of March, daily Dropbox business team trials have been up by 40%, and daily trials start to Plus Individual plan has increased by more than 25%. In the first two weeks of March, the Basic signups on both mobile and web rose significantly in Europe, especially in the countries which have been impacted negatively by the COVID-19 pandemic.

READ ALSO  Gundlach: Trump Will Win Next Week, And By 2027 "There Will Be Some Sort Of Revolution" 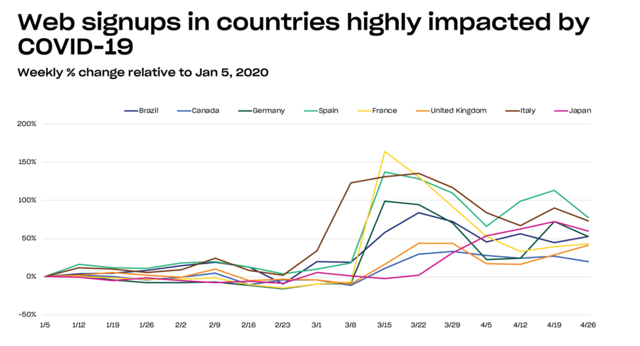 Dropbox has not only been experiencing rising demand in its mobile app but also the desktop app. The early adoption of its new desktop app has grown to more than 350,000 out of 450,000 Dropbox Business teams. The weekly active users on its desktop app surged by as much as 60%.

We expect the growth of Dropbox’s users and recurring revenue would accelerate further with the integration with other cloud service providers, including Zoom and Adobe (ADBE). Dropbox users can record a Zoom meeting, save it, and the transcripts directly to their Dropbox’s storages. As transcript files were indexed with full-text search, users can search for any phrases and words mentioned during the Zoom video conference. Because of these integrations, Dropbox has been growing along with the fast growth in Zoom’s users. Dropbox reported that Zoom’s integration usage in April was 20 times higher than February levels. We think that the WFH will become the new normal. Thus, Dropbox’s growth would be sustainable post-COVID-19.

Dropbox had quite a strong balance sheet. It ended March 2020 with roughly $1.1 billion in cash & short-term investments. The majority of its short-term investments were in high-quality U.S. Treasury securities and corporates notes & obligations. At first glance, investors might be worried about its total finance & operating leases of $1 billion, and the lease payments schedule spread in many years. The average minimum annual lease payments were roughly $100 million, which would be easily covered by Dropbox’s annual operating cash flows.

Dropbox has been trading at the lower end of its historical valuation. Since its IPO in the first quarter of 2018, Dropbox’s EV/Revenue multiples have been staying in the wide range of 3.3x to 13.6x. Compared to other cloud service companies such as Zoom and Slack, Dropbox has a much lower valuation. 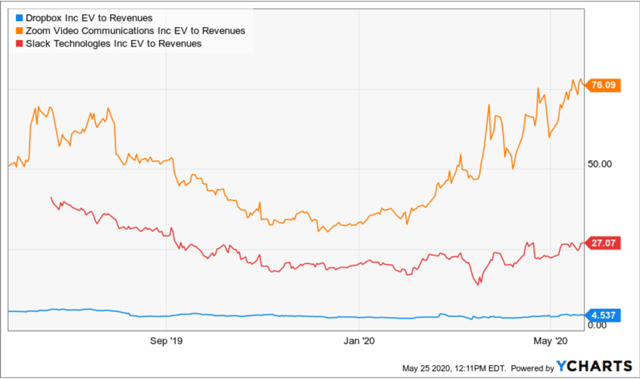 Zoom has the highest sales multiple of 76x, while Slack is trading at 27x. Although Dropbox is the most profitable business with positive free cash flow, it has the lowest valuation at only 4.5x EV/Sales.

For the full year 2020, Dropbox’s total revenue is estimated to reach $1.88 billion to $1.9 billion. The free cash flow for this whole year might stay in the range of $460 million to $470 million. Excluding one-time expenses, including its new corporate headquarters build-out and HelloSign acquisition, Dropbox’s free cash flow might reach $510 million to $520 million.

If Dropbox is valued at 6x its EV/Revenues, its enterprise value should be roughly $11.3 billion. As it currently has $1 billion in cash and short-term investments, the total market cap should be worth $12.3 billion. With the total shares of 419.3 million, it could be worth more than $29 per share. In the next four years, Dropbox targets to deliver an operating margin of 28%-30%, generating $1 billion in free cash flow. A 20x FCF valuation could value Dropbox at $20 billion, or nearly $48 per share by 2024, 120% upside potential from the current trading price.

We value Dropbox based on the assumption of potential free cash flow generation of $1 billion by 2024. However, there would be a lot of things which can happen in the next four years. Besides, there is fierce competition from other cloud services providers such as Slack, Microsoft (MSFT), Google (GOOG), and Amazon (AMZN). If Dropbox does not deliver better services than its competitors, users can easily switch to other applications.

What we like about Dropbox is its ability to generate profitability and free cash flow. We expect this trend will continue, and Dropbox can keep acquiring users and growing its free cash flow. Of course, there are certain risks involved, including competition and the probabilities to generate its targeted 2024 free cash flow. With the relatively low valuation compared to peers and its free cash flow generation capability, we think Dropbox could deliver a good return to shareholders in the next several years.

Disclosure: I am/we are long DBX. I wrote this article myself, and it expresses my own opinions. I am not receiving compensation for it (other than from Seeking Alpha). I have no business relationship with any company whose stock is mentioned in this article.