Dow Hits Record High; Now Up Nearly 18% on the Year 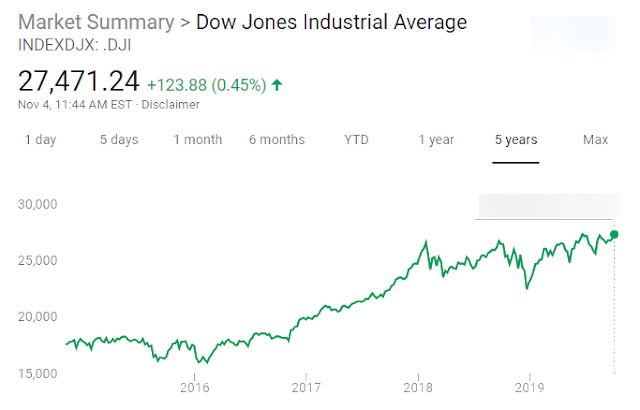 So much for the Austrian-lites who have been forecasting an imminent stock market crash since the Federal Reserve first raised rates in December 2015.

The Dow Jones has just hit a new record. The S&P 500 and the NADAQ Index are also at new highs.

Here are some of the things Austrian-lites wrote in the comments back in December 2015:

Robert, you live in San Fran where everything is booming. In middle America things are slowing down. My brother just got laid off from his job at Volvo Powertrain. Almost all shipping and freight related companies and going into a slowdown. That may have something to do with lack of demand for company inventories which statistics show are very high. Do you not see that the stock market is also very overvalued and ready to roll over. There is no energy to push the market past the May highs. Time wise, the multi year market rally is long in the tooth.

Robert how can you not look at manufacturing and bulk dry shipping and every single commodity and retail sales and not think recession hasn’t begun?

Raising to 1% would gouge the bubble and all hell would break loose in financial markets heavily addicted to free money. The bust cycle would erupt in earnest. Can’t imagine them being so stupid (as manipulators) to actually go that far. Even if they happen to be stupid enough to start the process tomorrow.

This a day before the first rate hike:

Significant rate raising at this juncture will rapidly and obviously lead to economic collapse in a way that will not allow them to evade being seen as personally responsible. That hot water will burn them. When it comes to personally getting burnt I believe they rapidly become just as smart, perceptive, and realistic as you and I. That’s why I’m betting against a rate raise.