Today I would like to discuss Dow Inc. (DOW), a chemical industry heavyweight and a famous constituent of the Dow Jones Industrial Average that was a part of DowDuPont before the separation in 2019. This chemical industry titan has an ~6.8% dividend yield that is backed by copious FCF, which I anticipate to remain on an adequate level to buttress dividend in 2020-2021, despite lackluster sales performance precipitated by ~5.2% decline in the global GDP, DOW is also executing a portfolio optimization strategy seeking to divest non-core assets which I expect to be both beneficial regarding inorganic FCF, and, hence, liquidity, dividend coverage and business focus. Once the recession is over, the company can return to single-digit revenue expansion additionally stimulated by growth capex (discussed below), which, in turn, will likely give impetus to DPS increases.

A ~$30.2 billion present-day Dow Inc. is the parent company of The Dow Chemical Company (or TDCC), a well-known chemical heavyweight that was founded in 1897 by Herbert Henry Dow. TDCC merged with DuPont in 2015; DOW itself was spun off of DowDuPont in 2019. 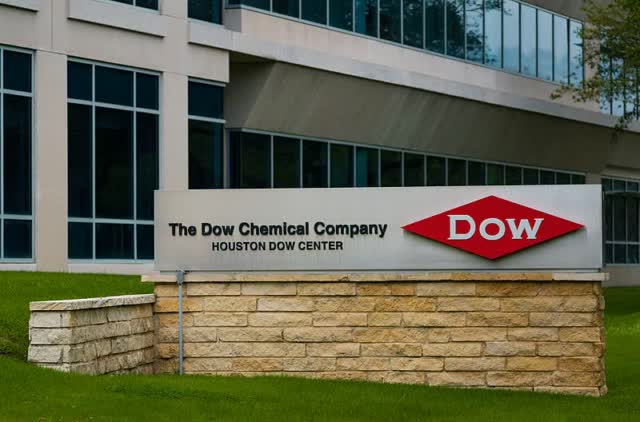 It is intuitively evident that the company with such a vast portfolio of chemicals will suffer in the case global gross domestic product falls off the cliff. Though Packaging & Specialty Plastics is Dow’s flagship segment regarding revenue, Dow’s overall exposure to the recession-immune consumer staples sector (e.g., home care and personal care) is insufficient to shield it against a precipitous decline in other segments this year.

The World Bank anticipates a 5.2% decline in global GDP in a baseline forecast (see the June 2020 Global Economic Prospects report). According to the data published in April, the International Monetary Fund is slightly more optimistic, as it forecasts the global real GDP to tumble 3% while the U.S. economy is anticipated to go down 5.9% in 2020. In both cases, sales growth prospects of DOW are murky. There are a few bullish signals from Dow’s end-markets like automotive (e.g., surged demand for trucks and other commercial vehicles in China) but I reckon they are too weak to fundamentally change the situation (and the Asia-Pacific is not Dow’s principal market, it mostly relies on the U.S.). Wall Street is expecting this year’s total sales falling by ~15.9%, a much deeper contraction in comparison to, for instance, another chemical heavyweight Olin Corporation that I have covered recently, which will benefit from the full operational control of the Lake City Army Ammunition Plant and an improvement in caustic soda pricing, as comes from the assumptions it shared in the presentation.

Being dependent on the pace of global economic expansion, even before the coronavirus sprawled into a global emergency, Dow has already been generally pessimistic. During the 4Q19 earnings call, the CEO said that as the company was entering 2020, the management was taking “a conservative view given the macro and micro trends that we are seeing.” The economic toll the trade war had taken had already been reflected in its 2019 results, and 2020 was not anticipated to be a year with double-digit sales expansion. Back in January, too many questions remained on the automotive industry recovery, sentiment in construction, oil price, and refining margins, etc. So, there is no coincidence that the Q1 revenue dipped ~11%, partly because of the slowdown in Asia, which was precipitated by the pandemic and the restrictions imposed by officials to contain the coronavirus.

But investors should not be too confident Dow will outlast the crisis unscathed. While Q1 was overshadowed only by a small decline in volumes and a ~11% reduction in sales, the second quarter will likely be the toughest in a few years. DOW is due to publish the Q2 results on July 23, and investors should brace for an unprecedented revenue dip, around 27.7%. Though the U.S. economy showed signs of the nascent economic recovery, analysts had been trimming their revenue and EPS forecasts. In June, the Dow CFO warned there would be an additional $350 million headwind to the second-quarter EBITDA due to clobbered activity in its end-markets and sluggish recovery. Weaker EBITDA will inevitably affect quarterly cash flow and dividend coverage.

READ ALSO  Beauty and the Brutalists: why the most maligned style in history should be preserved

However, there are a few bright spots. First, while Q1 sales were down 11% and LTM net income was deeply sub-zero, Dow improved cash conversion: 79% of adjusted EBITDA was converted into net CFFO vs. 55% in 1Q19. Also, the company ended the quarter with FCF of $839 million, more than 1.3x higher than dividends paid. Next, capital efficiency remained strong. Cash Return on Total Capital is a metric I have been using to assess how companies deploy capital, and if their capital allocation strategies are lucrative or not. As of my calculations, Dow’s CROTC is in double-digits, equals ~13.4%, as the denominator factors in debt & equity figures of the predecessor (the average total capital amounted to $42.3 billion vs. end-March total capital of $31 billion). So, if computed with $31 billion in the denominator, LTM CROTC was 18.6%, an incredible result for a chemical company.

While sapping demand for chemicals from the end-markets weighed on the top line, the company has been pondering options to recalibrate the portfolio and monetize non-core assets like ports and railways, shifting focus to core chemical operations. I strongly endorse these divestment initiatives, as the sale of low-priority assets will help to focus on the improvement of operating efficiency in the core businesses and, inter alia, bring cash inflows that will fortify the balance sheet and make it easier to navigate the downturn without issuing new debt instruments. On June 6, it was announced that Dow would sell “its rail infrastructure assets and related equipment at six North American sites to Kansas-based Watco Companies for $310 million.” For a broader context, $310 million equals ~59% of Dow’s Q1 dividend paid.

The debt burden is an Achilles’ heel of the new-born Dow Inc. In the last twelve months, it paid $900 million in interest. As of end-March, it had $1.49 billion in notes payable due within one year (see page 7). Though the most significant maturities of the long-term debt are scheduled in 2025 and beyond, in 2021-2022 the company will have to repay over $2 billion (~35% of its LTM cash flow). In 2020, Dow will likely need $799 million to cover the interest, as comes from its commentary on contractual obligations on page 48 of the Form 10-K. In sum, Dow is by no means on the cusp of default, but hefty interest obligations strain its ability to return cash to shareholders.

To conclude, DOW offers a high-yield opportunity that income-focused and value investors should consider. Dow has a rare combination of future low-single-digit revenue growth (analysts are predicting a rebound in 2021 to ~$39.15 billion in sales), leading market position with a formidable moat, and copious FCF undergirded by significantly improved cash conversion. Moreover, Dow has been investing in the expansion of its asset base (e.g., higher capacity at its ethylene facility in Western Canada) that will bolster sales and, likely, DPS growth in the 2020s. There is a substantial risk that the 2020 dividend will not be fully covered by FCF to Equity left after financing capex but I reckon available liquidity and cash proceeds from asset sales will shore up the coverage.