Don’t Count Corn Out Yet

Corn traders are so immune to bad news that it seems nothing can make them any more bearish than they already are. That assumption is now being put to the test, however, with the release of the latest U.S. corn planting estimates, which were decidedly negative. But as I’ll argue in this report, corn has a potentially strong rally catalyst in the near term in the form of the crude oil price. Here, we’ll discuss the likelihood that corn will witness a sympathy rally if a Saudi-Russia oil deal is officially realized.

Just when you thought the news couldn’t get any worse for corn, it did. The latest USDA corn planting estimates suggest that, for crop year 2020, acreage could be at its highest level in eight years. This caused an uproar among ag commodity traders, who are already reeling from coronavirus-related impacts on corn demand.

The Agricultural Department’s March 31 Prospective Planting report revealed that U.S. growers intend to plant 97 million acres of corn, a number that, if realized, would be the highest planting total since 2012. This was far above what most industry analysts expected. Corn acreage is predicted, moreover, to be higher in 38 of the 48 reporting states from a year ago. 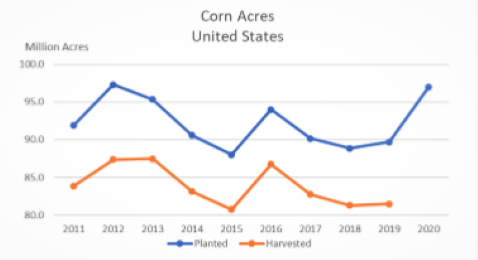 Meanwhile, workers at meat processing plants around the nation are demanding that employers do more to protect them from the coronavirus. As several workers in the meat producing industry have fallen ill, labor unions are reportedly putting pressure on plants to increase worker safety. There are heightened fears among analysts that the public’s growing fears over COVID-19 could create shutdowns, or at least significant slowdowns, in the meatpacking industry. Subsequently, live cattle futures prices fell heavily on the news April 2, as reflected in the following graph of the iPath Series B Bloomberg Livestock Subindex Total Return ETN (NYSEARCA:COW). 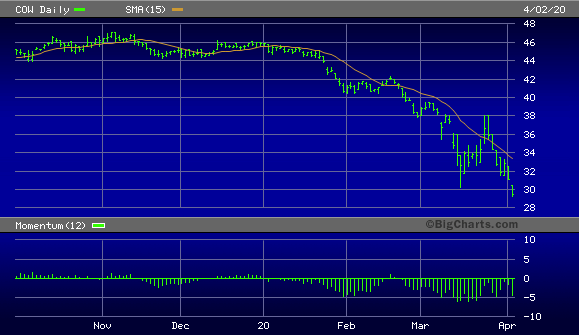 What’s bad news for livestock is often bad news for corn, given that maize is widely used to feed cattle. For this reason, the tremors in the livestock arena are being felt even among grain traders right now.

Not all the news is bad for corn, however. In the latest plantings report mentioned above, corn stocks for March were said to be down on a year-over-year basis, according to USDA, mostly as a result of higher usage, but also probably due to officials underestimating the previous year’s crop. As of March 1, corn stocks were at 7.95 billion bushels, which is 8 percent lower from the prior year’s total. 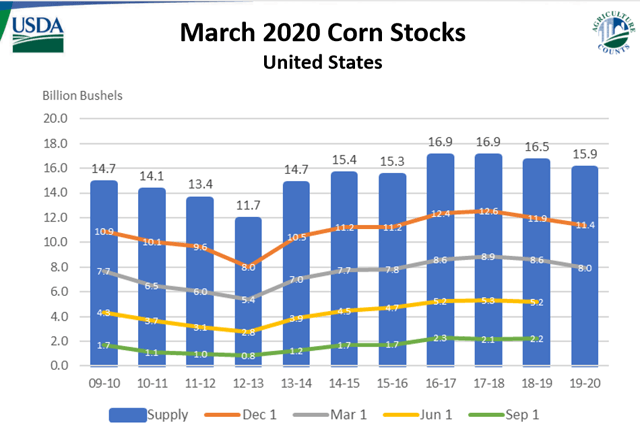 An even bigger potential positive for corn, near term, was Thursday’s news that President Trump reportedly spoke to leaders from Russia and Saudi Arabia and has been assured by both countries that a crude oil deal is imminent. Trump expects Russia to announce a 10-million-barrel cut, while Saudi’s crown prince is expected to announce a production cut deal soon, according to CNBC.

The news sent crude oil prices exploding higher on April 2, with WTI crude oil closing 23% for the trading session. This also marked the first time since February that the WTI oil price managed to close above its benchmark 15-day moving average (below) – no small feat considering this has been the worst energy market environment since the late 1990s. 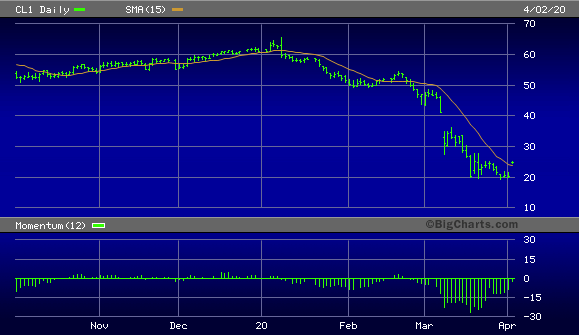 The corn market seemed to draw at least some inspiration from the crude oil rally on Thursday, with the Teucrium Corn Fund (NYSEARCA:CORN) rising off its lowest close for the year and closing slightly higher on April 2. Granted, corn prices and corn ETFs haven’t yet confirmed a short-term bottom, but at this point, even the slightest show of strength is a welcome relief in a commodity market that has been besieged with nothing but bad news for several weeks.

READ ALSO  CBRE: A Strong Brand Well Positioned To Benefit From Structural Tailwinds Over Time - Behind The Idea (NYSE:CBRE)

Indeed, plummeting oil prices have been something of a catalyst for the broad commodity market in recent months as other resource markets have taken their cues from crude. The oil price plunge represents the market’s fear that the global economy is on the cusp of an historic recession, which, of course, would categorically lower demand for all major resources.

If an oil deal is forthcoming, however, participants would have some consolation that perhaps not all hope is lost for the 2020 economic outlook. Not only would an oil deal likely prove extremely bullish for oil prices in the near term, but corn would also likely move in sympathy with oil, along with other major commodities. Right now, the broad commodity market is desperately looking for a reason – any reason – to hang its hopes on for some relief from the near-constant selling pressure since the year began. It’s not a stretch to suggest that corn could follow in oil’s footsteps, either, given that there have been past instances where oil prices rebounding from a collapse have carried corn and other ag commodities higher on its back.

On a strategic note, I’m looking for another entry point to buy a conservative position in corn via the Teucrium Corn Fund. If the oil price follows through with its latest upside breakout and continues rising over the next several days, I expect corn prices to eventually follow the move upward. For my own trading purposes, a 2-day higher close above the 15-day moving average in CORN (see chart below) will serve as a confirmed immediate-term breakout signal and a sign that a potentially explosive short-covering event will likely ensue. 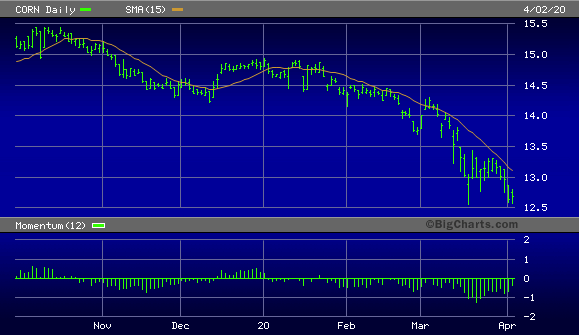 Corn has taken it on the chin for several months and is long overdue a relief rally. I strongly suspect we’re very close to the next short covering event. For now, however, a defensive posture is still recommended since the immediate-term trend for corn prices is still technically down. But assuming the Saudi-Russia oil deal is made official, corn’s rally prospects will brighten dramatically, and traders should finally see some light at the end of what has been a very long, dark tunnel.

Disclosure: I/we have no positions in any stocks mentioned, but may initiate a long position in CORN over the next 72 hours. I wrote this article myself, and it expresses my own opinions. I am not receiving compensation for it (other than from Seeking Alpha). I have no business relationship with any company whose stock is mentioned in this article.