In a sign of just how critical Pennsylvania is to Donald Trump’s re-election chances, the US president held not one but three rallies in the state on Monday.

“We win Pennsylvania, we win the whole thing,” Mr Trump told supporters at one of the events in Allentown in the east of the state.

Some pundits have quietly written off Mr Trump’s hopes of recapturing the White House after his Democratic rival Joe Biden opened a large lead in the opinion polls. Mr Biden is ahead nationally by an average of 8.5 points, according to an FT analysis of polling averages from RealClearPolitics

But Mr Trump still has a path to victory because Mr Biden’s polling leads are smaller in swing states such as Pennsylvania, where the Democrat is up by 5.7 per cent. A polling error, a late swing towards the president or both could help Mr Trump pull off another surprise victory as he did in 2016.

Most but not all of these paths run through Pennsylvania, a state where Mr Trump has campaigned heavily in recent months. It was crucial to his win in 2016 and is just as important this time round, especially as he is trailing by larger margins in Wisconsin and Michigan, former Democratic strongholds that proved decisive in his victory over Hillary Clinton four years ago.

With two big Democratic-leaning cities that straddle largely conservative rural areas, Pennsylvania offers something for both candidates. It has been called “Philadelphia and Pittsburgh separated by Alabama”. Mr Trump will need to keep the working-class Democrats he won over four years ago, particularly as he appears to be suffering in the suburbs of the large cities. 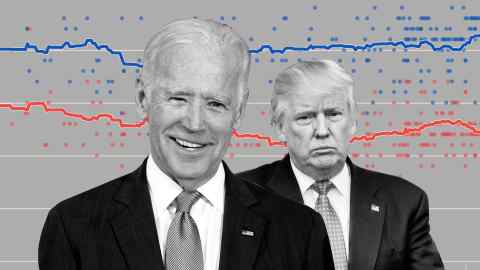 Mr Trump could win the election without Pennsylvania. But most routes to victory require wins in Florida and North Carolina — states he won in 2016 but where he now trails Mr Biden in polls — and at least two other swing states from a group including Nevada and Arizona, where he is also behind, or Minnesota, which the Trump campaign says is in play but has not voted Republican since 1972.

His win in Pennsylvania in 2016 was the first time the state backed a Republican since George HW Bush in 1988. During the Democratic primary, Mr Biden, who was born in the state, argued that his working-class roots would help win back Democrats who abandoned the party for Mr Trump.

On Monday Mr Trump tried to undercut that argument by painting his rival as an enemy of the working class. “Joe Biden is a diehard globalist who wiped out your steel mills, closed down your factories, killed your coal jobs . . . and supported every horrible, terrible, ridiculous trade deal over half a century,” he said in Lititz, a small town located in the middle of Pennsylvania.

He also tried to exploit a comment Mr Biden made in last week’s debate, when the Democrat said he would transition away from fossil fuels, before later clarifying his comment. And he played an edited video of Mr Biden saying he opposed fracking, which is important for the state’s economy.

“Will you remember that Pennsylvania?” he said after playing the video. “They want to destroy your energy jobs.”

While Mr Biden has been unclear in his comments about fracking in the past, he has recently stressed that he does not intend to ban fracking. 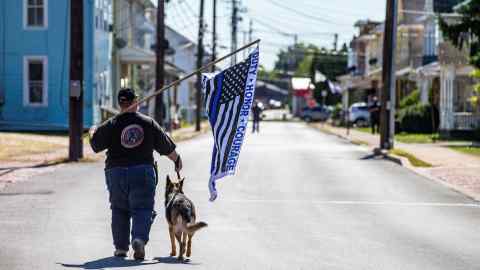 Following his Pennsylvania blitz, Mr Trump will campaign in Arizona and Nevada, where wins would help him compensate for a loss in Pennsylvania.

“The calendar reflects what we believe are potential pathways to 270,” Bill Stepien, the Trump campaign manager, said on Monday.

Doug Heye, a former Republican congressional aide, said it was hard to see Mr Trump winning without Pennsylvania and North Carolina, which has only voted Democrat once since 1976.

“The challenge for the Trump campaign is that in these two states, and several other swing states, Trump is on defence and you don’t win playing defence,” he said. “Trump needs to get on offence and time is running out.”

Speaking in Philadelphia on Monday, Mr Biden said he hoped he would win Pennsylvania “by the grace of God”. He said he was also confident about Michigan and Wisconsin, adding it was essential to rebuild the “blue wall” in Midwestern states that Democrats mistakenly assumed would stop Mr Trump from beating Mrs Clinton.

In his visits to Pennsylvania, Mr Trump has also tried to win back some Republican suburban women, who have soured on him, according to polls.

In an effort to attract Republicans who were uncomfortable with him four years ago but did not want to vote for a liberal, he reminded his supporters on Monday that the Senate would that evening confirm Amy Coney Barrett, his third conservative appointment to the Supreme Court.

Mr Trump waved pieces of paper in front of the crowds, as he read out polls showing him doing better than reported — a tactic he used in 2016. But he cited selectively, and sometimes inaccurately, in arguing that polls were underplaying his support as some surveys had done four years ago.

But in a worrying omen, he lags in states such as Arizona and North Carolina, where his margin of victory in 2016 was almost identical to the final polls. He also trails Mr Biden in Nevada, a state he lost to Mrs Clinton four years ago.

In others states such as Wisconsin and Pennsylvania, polls missed the result by giving too little weight to white, working-class men. But pollsters say they have revamped their models to better reflect those voters.

Video: US election 2020: how to avoid being manipulated by fake news

“Most are now weighting for education as well as sex and race,” said Charles Franklin, director of the Marquette Law School poll in Wisconsin.