A U.S. dollar is an IOU from the Federal Reserve Bank. It’s a promissory note that doesn’t actually promise anything. It’s not backed by gold or silver. − P. J. O’Rourke

The U.S. dollar is currently the world’s leading currency. As per the IMF, 61.99% of global exchange reserves were held in dollars as of Q1 2020. Most businesses across nations use the dollar in international transactions, followed by the euro and the Japanese yen. It’s estimated that about 40% of the world’s debt is issued in U.S. dollars.

The dollar had derived its strength from the strong U.S. economy, but the arrival of COVID-19 has changed the rules of the game. There’s a lot of speculation these days that the dollar will crash and lose its prominence as the global reserve currency. Such doomsday theories may or may not prove right, but this is the right time to discuss a worst-case scenario:

Current Strength of the Dollar 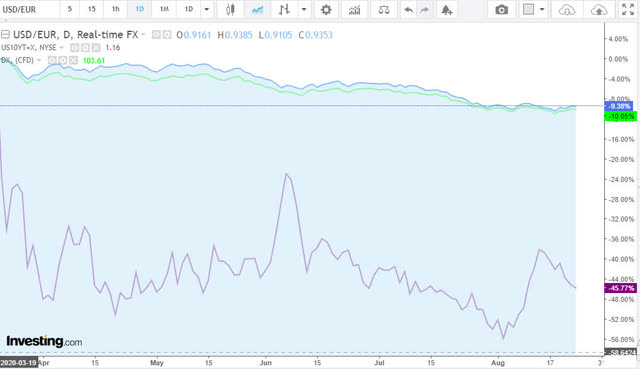 Since April 19, 2020, the Dollar Index Futures (DXY) and the USDEUR have fallen by 10.05% and 9.38%, respectively. This significant weakness in the dollar in the recent past is a red alert.

Another important indicator is the 10-Year Treasury Notes. As we know, the interest rate on these securities is currently just about 0.63%, and the Fed already has announced that it will hold such low levels of rates until 2022. The real rate of return thus turns out to be still lower – in fact, negative after accounting for inflation. So, it’s uncertain how long global investors will keep investing in these bonds. If the fund flows reduce, the dollar value will be adversely impacted.

Factors that Could Cause a Dollar Collapse

Recent geopolitical tensions have kept the currency pot boiling beyond tolerable limits. On Aug. 5, 2020, Russia and China announced that they would enter into a financial alliance to reduce their dollar dependence. In Q1 2020, the dollar’s share in these countries’ trade declined to below 50% for the first time. The Euro’s and their national currencies’ share climbed to 30% and 24%, respectively.

If the U.S. government continues imposing trade sanctions on other countries as it has done on China, they too may enroll in this de-dollarization movement. We are not sure if it will happen, but if it does, it will be bad news for the dollar.

The Fed is doing, according to those at the Fed, whatever it takes to support the economy through the course of the pandemic. However, bankruptcies and unemployment numbers are rising along with the fiscal deficit.

The Association for Corporate Growth, a group that lobbies for middle-market businesses, says that 81% of businesses failed to get a loan through the Fed’s Main Street Lending Program.

In the housing sector, the government loan market (Freddie, Fannie, and Ginnie Maes) and the private non-agency mortgages have been neglected by the Fed. This is hurting the housing sector and analysts are expecting delinquencies to rise.

Corporate bankruptcies are rising and many retail and oil and gas companies already have shut shop. We know that unemployment numbers are rising and will most likely get back to pre-COVID-19 levels by as late as 2022–2023.

The point here is that the U.S. national debt is inflating, but the impact of the stimulus is not showing on the ground. People are not thriving as they should be. If good money continues to chase bad money (for example, junk bonds and the avoidable ETFs), it’s not going to help the economy in any way. It will make people chase risky assets. We already are witnessing Main Street suffering at the cost of Wall Street.

If the pandemic prolongs and a safe and effective vaccine or drug is not discovered within a reasonable period, our government will have no option but to keep pumping money into the economy. The only difference that may show up is that it could link the new loans to outcomes. But this is in the realm of speculation, and we will cross the bridge when we get to it.

Foreign countries, led by China and Japan, own more than $6 trillion of U.S. debt. If they sell, the dollar will come crashing down. But both countries cannot afford to take that chance because they are dependent on U.S. consumers. This is a next-to-impossible scenario, and I just mentioned it here because anything’s possible in current times.

Consequences of a Dollar Collapse

If the dollar crashes for any reason, it will throw the world into economic mayhem. Investors who own dollars will dump it and park their funds in other currencies like the Euro, or in precious metals like silver and gold, or commodities.

The demand for Treasuries will hit rock bottom and there will be general panic in the investor community. In the long term, interest rates and inflation would rise. The import bill will get costlier, while exports will become cheaper. It will hurt us because we are net importers. For example, in June 2020, we imported goods and services worth $209 billion and exported goods and services worth $158 billion, leaving us with a trade deficit of about $50 billion.

Also in the longer term, a weak dollar will suffocate business, increase unemployment, and even cause an economic depression.

A dollar crash is the stuff that economic nightmares are made of. In July 2020, I had tweeted that the dollar index had broken a key support level, an event that suggested weakness ahead. 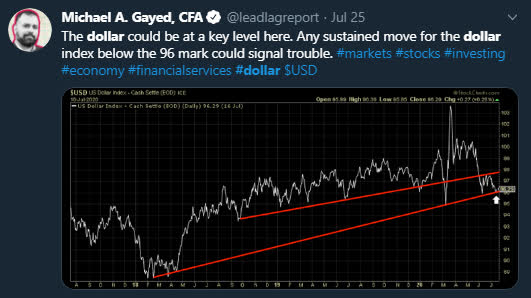 As per Goldman Sachs, there are clear and real concerns about the dollar maintaining its global leadership as a reserve currency. After the Stimulus-2 Bill got lost in political bickering, the dollar value has dipped some more.

Though the currency will continue to retain its dominance in the medium term, economists are unable to visualize any positive developments in the long run.

While we can hope for our dollar to retain its dominance in the long term, we know what could cause its collapse and the consequences of a crash. The prudent thing to do is always discount the worst and hope for the best.

Sometimes, you might not realize your biggest portfolio risks until it’s too late.

That’s why it’s important to pay attention to the right market data, analysis, and insights on a daily basis. Being a passive investor puts you at unnecessary risk. When you stay informed on key signals and indicators, you’ll take control of your financial future.

My award-winning market research gives you everything you need to know each day, so you can be ready to act when it matters most.

Additional disclosure: This writing is for informational purposes only and Lead-Lag Publishing, LLC undertakes no obligation to update this article even if the opinions expressed change. It does not constitute an offer to sell, a solicitation to buy, or a recommendation regarding any securities transaction. It also does not offer to provide advisory or other services in any jurisdiction. The information contained in this writing should not be construed as financial or investment advice on any subject matter. Lead-Lag Publishing, LLC expressly disclaims all liability in respect to actions taken based on any or all of the information on this writing.

Previous Post‘Game over’: India may quietly phase out Huawei & other Chinese vendors from its telecoms networkNext PostWe’re All Serfs Of Big Tech Now