In normal times Gran Vía in the heart of Madrid is Spain’s shop window to the world, but now the 100-year-old boulevard bears testimony to the economic pain of coronavirus — and a growing divergence at the heart of the eurozone.

“There is no spirit any more: we don’t have tourists and the locals are staying at home,” said Antonio, the manager of Bravo Jata, a Gran Vía shoe shop between a shuttered nightclub and a mothballed theatre. He was reluctant to give his surname.

The pandemic has hit Madrid’s economy hard. Today Bravo Jata sells between two and five pairs of shoes a day — about a 20th of the volume a year ago.

“I think we will have to close down again — not because of the pandemic itself, but because of the economic crisis,” said Antonio, who shut the store during lockdown between March and July. He thinks the shop, founded in 1942, may only be able to last another three months.

By contrast the rebound in German economic activity is clear to anyone walking along Frankfurt’s Zeil, one of the country’s busiest pedestrianised shopping streets, which has been packed with crowds.

Unless we want to end up with the ECB owning half of all eurozone government debt, we need to address this divergence

Katharina Pietzner, manager of the nearby Streusel Bar, said customer numbers had jumped recently, despite the coffee-and-cake store only allowing entry to one group of people at a time while wearing masks.

“We had a really nice summer — it’s been pretty busy and people are happy to come out again,” she said. “We get way more people coming in their lunch breaks now than in June, as there are lots of offices around here.”

Before the pandemic, Spain had been growing faster than the eurozone average, while Germany was on the brink of recession as longstanding weaknesses held back growth. Europe’s largest economy relies heavily on exports which were hit by a fall in global trade, while its carmaking sector has been struggling with the switch to electric vehicles.

But as coronavirus spread across Europe in the first half of this year, Spain’s economy contracted by 22 per cent, almost twice Germany’s fall of 12 per cent. The recovery is also playing out differently: German retail sales have been above pre-pandemic levels since May, while in Spain they are still lagging behind.

One reason for Spain’s underperformance is the virulence with which the pandemic hit in March and April, and the speed with which infections rose again a few months later. Spain’s lockdown was tougher than Germany’s and the Spanish economy was particularly exposed because of its reliance on tourism.

Spain is also afflicted by structural problems such as a dysfunctional labour market — youth unemployment is over 40 per cent — and a high proportion of small companies lacking deep enough pockets to withstand the crisis.

And although the strengthening euro undermines the competitiveness of German exporters, Melvyn Krauss, an emeritus senior fellow at the Hoover Institution of Stanford University, said the exchange rate was likely to hit southern European exporters even harder because they are often more price-sensitive.

All this means that the European Commission expects Spanish output to shrink 10.9 per cent this year, far more than the 6.3 per cent predicted for Germany.

Economists warn that this two-speed recovery — in which Europe’s fiscally stronger north is rebounding faster than the more heavily indebted south — is set to increase financial market strains, fuel political tensions and complicate the task of policymakers in Brussels and Frankfurt.

“The pandemic has widened the structural divergences between the north and south of the eurozone and that accentuates the difficulties of setting monetary policy for the whole region,” said Lena Komileva, chief economist at G+ Economics.

So far the European Central Bank has avoided a repeat of the debt crisis that brought the eurozone close to break-up in 2012 by buying government bonds and pumping trillions of euros of ultra-cheap money into the financial system, keeping a lid on borrowing costs.

But, Ms Komileva said, “unless we want to end up with the ECB owning half of all eurozone government debt, we need to address this divergence”.

However, Spain’s recovery plan has become the subject of political bickering; Madrid has yet to set out detailed proposals for spending the €140bn of EU funds it is due to receive over five years.

While the leftwing minority government pushes parliament to pass Spain’s first budget for more than two years, the centre-right opposition wants an independent agency to administer the spending, to avoid it being distorted by clientelism and political considerations. 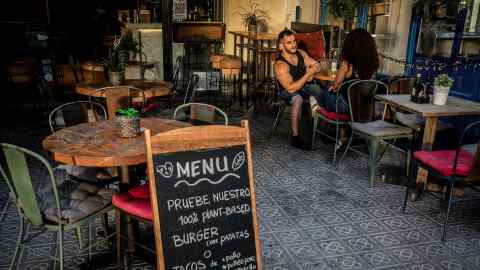 The crisis will profoundly affect Spanish public finances, pushing the country’s outstanding debt from 96.5 per cent of GDP last year to as much as 128.7 per cent by 2022, the country’s central bank said on Wednesday.

Germany is less constrained by fiscal concerns. After years of budget surpluses, it will run a deficit this year, taking its national debt to 75 per cent of GDP, according to the Bundesbank. Berlin enlarged its economic recovery package, expanding its Kurzarbeit furlough scheme — which has supported more than 5m jobs — from 12 to 24 months.

Vítor Constâncio, former vice-president of the ECB, said there was a danger that fears about rising debt levels could lead southern governments to hold back spending and wait to receive the EU funds later in 2021.

“If these countries delay spending next year, it will widen the economic divergence, with all the financial, social and political consequences that brings,” said Mr Constâncio.

The Spanish government is in negotiations with business and unions over the extension of state-bankrolled furlough schemes, known as ERTEs, which are due to expire at the end of this month.

Ms Fernández estimated that the ERTEs will cost €14bn this year, which would eat up two-thirds of the €21bn emergency EU loans Spain has received to help pay unemployment benefits.

But Ms Fernández warned that the schemes could not be prolonged indefinitely.