Disney under fire for filming in Chinese region where Uighurs detained

Home Financial news Disney under fire for filming in Chinese region where Uighurs detained
2020-09-082020-09-08By finanz.dk

Disney has come under fire for filming parts of Mulan, its latest blockbuster movie, in a Chinese region where Muslims are held in internment camps.

The entertainment group released Mulan for sale on its Disney+ streaming platform on Friday after the pandemic devastated cinemas across the world, with many cinemas remaining shut. Disney charges $30 to watch the film, as it aims to recoup its investment in what would normally be a billion-dollar theatrical release.

While the arrival of Mulan brought excitement from Disney fans, the movie’s credits have sparked controversy.

Disney thanked multiple Chinese Communist party departments in the Xinjiang region, where the government has interned more than 1m Uighurs, Kazakhs and other Muslims. The US group also thanked the public security bureau of Turpan, a city that is three hours’ drive south-east of Urumqi and known to house at least one Uighur internment camp, in the credits.

China’s public security apparatus is integral to populating the camps with Uighurs who can be interned for as little as growing a beard or abstaining from drinking alcohol.

The US commerce department added the Turpan PSB to its entity list last year, a move designed to prevent them from gaining access to American technology. 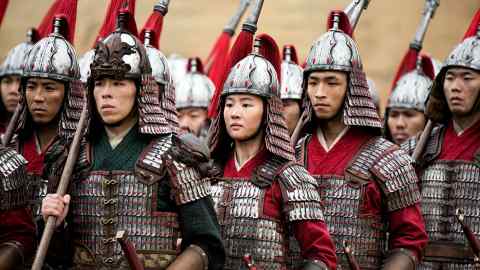 “Imagine parts of a global blockbuster being filmed in the vicinity of minority villages, when gov’t work teams are going door to door, asking questions, followed by mass internment by police,” Adrian Zenz, a senior fellow in China studies at the Victims of Communism Memorial Foundation, a non-profit organisation, said on Twitter. “Global capitalist exploitation at its best.”

Supporters of the Hong Kong protests have called for a boycott of the film for months, enacting the hashtag #BoycottMulan on social media.

Disney did not respond to a request for comment.

The group has a long history of operating in China, both through films and its Shanghai Disneyland theme park. The company, along with other Hollywood movie studios, has become dependent on the country as a source of sales for their blockbuster films. China made more than $9bn in box-office sales last year, making it the second-biggest film market in the world after the US.

In February Alan Horn, Disney’s film studio chairman, told the Hollywood Reporter that Disney tries to be “non-political, apolitical when it comes to all this stuff”.

When asked about Ms Liu’s comments, he said: “Free speech is an important component of our society . . . there’s always an issue somewhere in the world. China happens to be a very, very big market . . . but it’s not the only market where there have been issues.”