As we all know, Walt Disney Company (DIS) has been badly hit due to the coronavirus pandemic. The corporation we all associate with terrific movies, majestic theme parks, and great streaming services is suffering right now. It requires plenty of guess-work to figure out when the Covid-19 gets under control. I hope it will happen next year. Experts predict the coronavirus vaccine will become available to many people. However, I’ll try to discuss Disney’s current situation, its revenue sources, financial health, and valuation metrics.

Very well. We all understand it is a diversified business. But let us have a look at how the company makes money in a bit more detail. 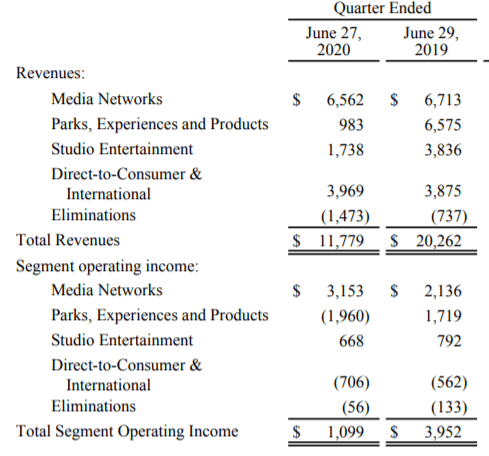 As can be seen from this extract, the results for the quarter ended on 27 June 2020 have deteriorated significantly compared to the same period a year ago. But let us dig a little bit deeper here. 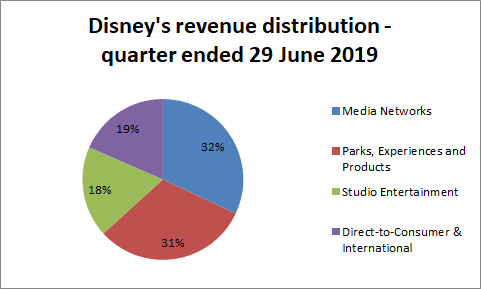 As can be seen from the diagram above, the media networks division used to account for a lion’s share (32%) of Disney’s sales revenue. Media networks include broadcast and cable networks, including ABC, Disney, and National Geographic. So, the company’s income is due to affiliate fees, advertising, as well as licensing fees. The division didn’t have a bad time in the third quarter. With everyone forced to stay at home, it looks quite logical that people watched more channels than they used to before the pandemic.

Parks, experiences and products also account for about a third of Disney’s revenues. It’s self-explanatory why the revenue from this segment became almost negligible, whereas the profits turned to losses. Most of the entertainment parks were shut down. It’s logical they are gradually reopening now. However, due to another coronavirus wave, Disneylands and other theme parks will probably be shut down again. Even if they don’t, the customer traffic will still remain suppressed for a while.

As concerns studio entertainment, a considerable part of its proceeds is due to selling licenses to movie theaters. Obviously, we have a big problem here too since cinema traffic has fallen quite low. But it looks like this department has become leaner and fitter. In spite of the considerable fall in revenue, the division still managed to record a profit.

The direct to consumer and international segment includes international TV networks and channels such as Disney, ESPN, Fox, National Geographic, and Star. The famous direct-to-consumer online streaming service is also part of this division. It was launched in November 2019. It seems to be demanded by consumers. But I believe Disney has plenty of room to grow this division’s profitability. However, the company faces stiff competition in the area of streaming media. Many high-tech companies offer these services. The largest player in this field is Netflix (NFLX).

Overall, it looks like many of Disney’s divisions are struggling due to pandemic.

The Walt Disney Company’s debt notes are rated as A2 by Moody’s. As we all understand, it is quite a high investment credit rating. But let us look at the company’s financial metrics in a bit more detail.

Quite recently the company issued some more debt to raise its liquidity even further. The newly issued debt is maturing in 2026, 2028, 2031, 2040, 2051, and 2060. Looks like plenty of time for the company to pay it back! But other than that Disney has an unused credit revolver facility of $17.25 billion and a large cash pile to boot. What’s more, the company is also cutting costs and capital expenditures. Moody’s predicts Disney will suspend its share buyback program. It will also refrain from paying dividends for a while. That’s, obviously, bad news for the company’s shareholders in the short run. But in the long run, this will help Disney save cash and better cope with the crisis the company is facing.

It looks like Disney still has enough financial health to survive the crisis. But is its stock a bargain?

It looks like the company is somewhat overvalued right now. We can reach this conclusion by looking at the company’s discounted cash flow (DCF) value. Simply Wall Street published quite an interesting research on the company’s future free cash flows (FCF).

According to the experts’ estimates, Disney’s stock that traded for around $128 was about 30% overvalued. As of the time of writing, it isn’t much cheaper either, still trading for about $125.

In my view, the estimated future cash flows assume the demand for Disney’s services will fully recover by 2022. In order for this to happen, the coronavirus crisis should end too. What’s more, Disney should also keep and even increase its market share. Things like these are hard to predict, however. That’s why I consider the DCF method to be useful but not always reliable at times like we are experiencing now.

So, I’d go for the accounting multipliers. The normalized P/E (price-to-earnings) ratio means the average P/E over a number of years. If you look at the current graph, the P/E valuation now looks extremely high. So, the company doesn’t look like a bargain at all.

Remember Benjamin Graham who was skeptical of companies with price-to-earnings ratios above 20.

Obviously, if you look at the forward P/E ratio graph, the stock seems to be even less of a bargain. The forward P/E ratio is based on analysts’ earnings estimates. As we can see from Simply Wall Street’s analysis, they are rather quite optimistic. In other words, they assume the demand picks up gradually in 2021 and completely rebounds by 2022. I hope it will be the case, of course. After all, many experts predict the coronavirus vaccine will become available in 2021. However, we cannot be certain.

I appreciate the fact Disney is a great, well-established, and diversified company. However, the risks it is facing are significant. What’s more, the current valuations do not justify these risks. Although I am a great fan of Disney, I would refrain from buying its stock just yet. I’d either wait for another stock market correction or the complete end of the coronavirus crisis.