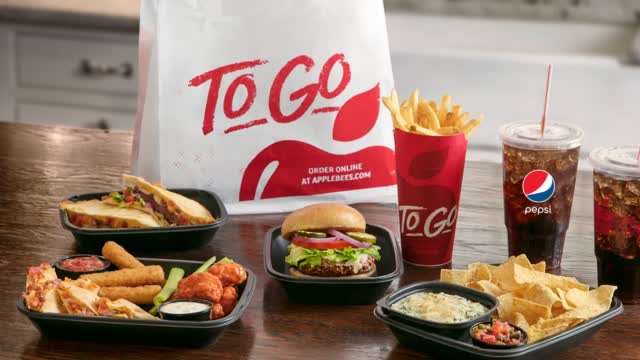 Despite the pandemic, Applebee’s is still offering take-out at many of its locations. Source: Applebee’s Facebook page.

I’ve previously owned and written about Dine Brands Global (DIN). I recommended this stock in 2017, and subsequently sold it a year later for a 69% gain. As the stock lost most of its value in March, I decided to give it a fresh look.

Dine, is the owner of the Applebee’s and IHOP names. It runs an asset-light business model, with franchisees operating most of the company’s restaurants. This gives Dine – at a corporate level – a portion of sales from its chains while leaving much of the operational risk on its partners. This is an attractive business model. However, due to Dine’s huge debt load, it is also a risky company.

In 2017, Dine’s stock was overly beat-up on fears of falling same store sales. There was a popular narrative at that time that claimed that millenials were killing chain restaurants. And it’s partly based in truth, though like many “millenials” themes, those concerns were overblown. Rising labor costs were another headwind. In any case, DIN stock went from the $90s to the $40s. As same store sales picked back up in 2018, the stock turned back up and subsequently hit $100 recently.

Now, with the coronavirus, however, investors have gone back to panicking about the debt; DIN stock briefly traded below $15, marking an 85% loss in just a few weeks. Shares have now settled around $35 – a big recovery from the lows, but still way down from pre-March levels.

What Happens To The Franchise Operators?

A big question for Dine, and other similar asset-light franchisor models, is what will happen to their franchisees. From a top-down view, it would seem that a company that doesn’t operate its own stores, like Dine, finds itself in a much better position than the alternative. The direct risk of underperforming stores falls to the franchisee, not to Dine Brands itself.

If you own and operate a restaurant yourself, your cash flow can go well below zero. You have restaurant leases, taxes, employees, maintenance, and so on to deal with. If you’re the franchisor, on the other hand, that stuff isn’t your problem. The most common downside scenario would be some of your franchisees going bust, and thus closing their restaurants. You lose revenues as those royalty streams go dark. But your loss is capped there.

A franchisor with minimal debt, then, would be in fantastic shape in a crisis like this. As the operating losses would go elsewhere, the corporate brand owner could simply ride out the storm and then spend more on advertising, new franchisee recruiting, and the like to get the brand going again once the economy improved.

In this case, however, it’s not going to be that easy for Dine Brands. That’s because Dine has a ton of debt. As of last quarter, Dine Brands had nearly $1.3 billion in long-term debt. Add in other debits, and the company’s total liabilities exceeded $2.2 billion.

This is a bit of a problem. You see, while Dine Brands has $2.2 billion in liabilities, it has just $2.0 billion in total assets of the last quarterly report. This means that Dine Brands has negative equity. On a per share basis, quite a bit of it, in fact – book value comes in at negative $14.63 per share. And many of those $2 billion in assets are intangible things, such as goodwill. Just on a tangible basis – cash, property and equipment, inventories and other hard assets, Dine Brands racks up a jaw-dropping minus $70 per share in book value. As the company earned about $5 per share per year in good times, it would theoretically take a long time to tackle this negative equity.

Since the company is worth -$15 per share on a book value basis and -$70 per share on a tangible (i.e. liquidation) basis, why isn’t the stock close to worthless? The answer comes back to the positive part of the asset-light business model. The company’s brand names and franchisee relationships are the company’s main assets. However, you don’t see a line of the balance sheet saying precisely how much the name Applebee’s is worth, for example.

In any case, despite the lack of balance sheet assets, the company is normally quite an earnings powerhouse. The company has generated roughly $200 million per year in operating income over the past five years. Of that, it pays out about half in interest and taxes, and the other half is available to shareholders. Given its preference for remaining a highly-levered shareholder-value maximizing firm, Dine has used nearly all of that net income on paying dividends and buying back stock.

You see, if the economy had remained good indefinitely, the company could have stayed deeply in debt without issue. The business would keep humming along spitting out its $200 million a year in operating profit. Even after paying debtholders and Uncle Sam, this left a fat piece for common shareholders. Dine’s stock was often yielding 7-8% in recent years. If the status quo had held, Dine could have effectively kept operating as a high-yield moderate-risk royalty stream off Applebee’s and IHOP. Changing consumer trends in the U.S. threatened the long-term viability of this set-up. On the other hand, Dine has shown substantial success with growth in overseas markets; this probably could have offset falling U.S. demand for quite a few years.

The Virus Changes Everything

Like with most other restaurant chains, Dine now finds itself having to reconsider its approach. While the debt was no pressing issue in good times, expect creditors to become much more skeptical going forward. Interest costs could go up markedly as the company rolls over debt. Interest expense has been running about $60 million per year out of the company’s $200 million operating profit.

The company was in a reasonable position as of 2019, when the economy was strong and appeared likely to remain strong for awhile yet. Now, however, it quickly needs to take steps to reduce risk.

Meanwhile, there’s the franchisee factor to worry about. How many of the company’s restaurants are in danger of permanently closing thanks to the economic effects of the virus? Applebee’s in particular had already had a drop in its U.S. unit count before this got started. Remember that Dine’s stock got hammered a few years ago on falling same-store sales and higher labor costs. Even in a good economy, the company’s aging concept was a source of question marks. Now, in a slumping economy, many weaker franchisees with marginal locations are likely to pull the plug on some of them.

Corporate can help slow this down in a variety of ways. They could reduce fees for a time, pump more money into advertising, buy-out weaker store locations to keep them open while trying to find new partners to operate them, and so on. These options would all cost considerable amounts of cash, however, and as we discussed above, Dine has a substantially negative net worth and its usual flow of operating profits will be interrupted for the time being.

There are outside factors to consider as well. For example, what portion of Dine’s franchisees will be able to obtain assistance from the small business lending portion of the recent CARES Act or other subsequent legislation that the government puts in place in response to this crisis?

What’s The Right Market Cap For This?

Dine’s stock could easily recover if the economy comes back online more quickly than expected. Even after Dine’s roaring rally off the lows, the market cap on this business is still fairly low. And just look at where it was a couple of weeks ago: 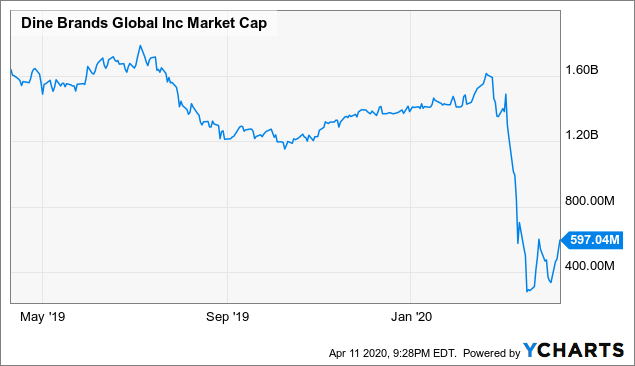 Keep in mind that the company threw off around $100 million of after-tax profit every year prior to March 2020. In a scenario where the economy comes back quickly, franchisees get some sort of aid, and corporate gets government perks such as tax relief as well, the company could conceivably continue earning nearly $100 million per year which is huge given the current market cap.

Given the huge debt burden lingering under the surface, paying $1.6 billion for that profit stream makes little sense; Dine Brands was dramatically overvalued in February. On the other hand, that $300 million market cap it hit in March was exceedingly low, equaling just three years of pre-crisis earnings. And since Dine has (historically) paid out virtually all profits as dividends and share buybacks, you could get most or all of your investment back in a few years.

Even if you’re long-term bearish on brands like Applebee’s and IHOP, they aren’t going to disappear in just a few years, and don’t forget international, which is still growing nicely (or was until March 2020 at least). If Dine keeps running with the pedal to the metal approach and pays out most of its profits as dividends, the stock could still be a steal at $35 ($600 million market cap).

Watching Dine, Not Yet Buying

That said, I’m not a buyer today. That’s because I don’t know where the company’s profits level out at post-crisis. We’ve never had this sort of sudden economic stoppage before, and it’s really hard to model what exactly this will do to the franchiser/franchisee relationship, among many other things. I also think restaurants that rely on bars and sports for some of their activity will be slower to come back than other concepts. In the meantime, Applebee’s and IHOP probably aren’t the first things that come to mind when most people are considering ordering delivery or takeout, and it will be a bit until we’re back to normal levels of socializing.

Unlike many other battered entertainment and travel stocks I’ve looked at lately, this one doesn’t get a “don’t buy” rating from me, though. In fact, if it drops back toward $20-$25 where it was a few weeks ago, it may well be worth a speculative play.

That said, the company really needs to slash the dividend for now. Sure, the company pulled in $223 million in cash from its credit lines last month. But there’s no need to spend it on dividends. Until we get a clearer picture of how their franchisees hold up, Dine should keep the cash on hand to have more flexibility. Also, given the company’s huge debtload, maintaining its credit rating its vital. It must keep access to capital at decent interest rates. The balance sheet was highly levered coming into this, now is no time to be aggressive. In other words, don’t buy DIN stock for the dividend, at least in the short run.

Longer-term, however, the company seemingly has the liquidity to stay in business through this crisis, and the asset-light business model protects corporate to a reasonable extent. I’m far from certain Dine will be able to turn around. But the odds aren’t too bad, and given the massive leverage in the equity slice of the capital structure ($600 million market cap versus an Enterprise Value of nearly $2.5 billion), a small improvement in the company’s outlook could cause a major run in the stock price. 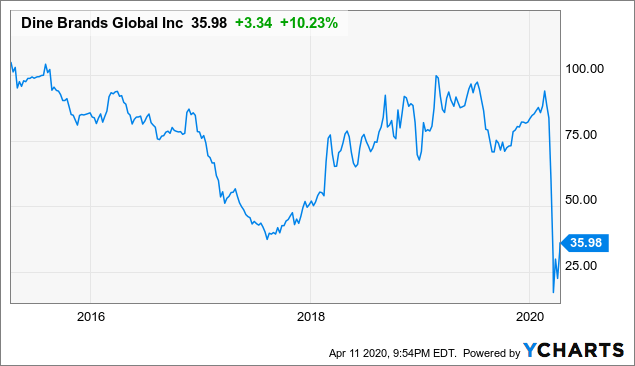 Investors got way too negative on Dine in 2017, allowing folks (such as myself) to score a nice 50% or greater return once sentiment picked back up in 2018. While this downturn is an order of magnitude worse than 2017, the same general trading dynamic may apply this time around as well.

This is an Ian’s Insider Corner report published April 12th for our service’s subscribers. If you enjoyed this, consider our service to enjoy access to similar initiation reports for all the new stocks that we buy. Membership also includes an active chat room, weekly updates, and my responses to your questions.