Digital Realty: Checks All Of The Boxes, So We Upgrade To A Buy (NYSE:DLR)

Let us state it right from the beginning: We’re upgrading Digital Realty (DLR) from a Hold to a Buy.

While the data center segment is the best-performing REIT subsector year to date – up 24.7% versus the Hoya Capital REIT Index, which is down 15.6% – there is still value to be found.

In the past, admitted powerhouse Equinix (EQIX) got all the love and attention from tech investors. Digital Realty was left in the shadows as “just a real estate play” for dedicated REIT shareholders.

We’ll be the first to admit that, from a tech perspective, DLR did seem rather “sleepy” in the past. But times? They’re a-changin’.

And investors of all stripes should pay attention.

Digital Realty used to be known – overall accurately – as a large owner of land (especially in the all-important northern Virginia market) and hyperscale facilities in the U.S. The story has seen significant evolution in the past year, however.

While we’ll expound on this thesis in the following segments, here’s the bottom line: DLR’s toolbox is full!

DLR checks many (dare we say “all”?) boxes for REIT investors looking for defensive plays. Better yet, this one is in a sector with multiple macro tailwinds, something that can’t be said for many REIT stocks today. 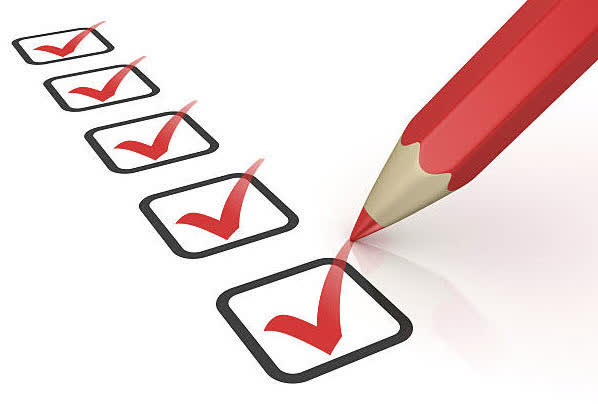 Bookings were about 40% higher than the company’s previous best. And when we peel back the onion, we get even more interesting evidence of a long runway left. Specifically, revenue from multisite deals was up 13% year-over-year, while DLR’s average deal size increased 8%.

The shutdowns, social distancing, and work-from-home policies have indeed fostered further data center growth. But CEO Arthur Stein noted at the Bank of America conference on September 15 that this strong second-quarter performance came from deals that were in the pipeline long before the pandemic.

Perhaps less well known are its meaningful moves in South America (Chile, Mexico, and Santiago in the last nine months), Japan, South Korea, and Australia since 2018. And it doesn’t seem to be slowing down.

Earlier this month, it expanded into Croatia and increased its land holdings in Milan and Frankfort. 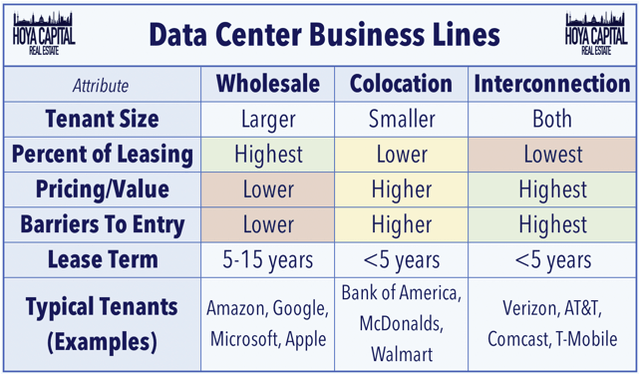 That reach significantly increases its total addressable market (“TAM”) of global users. Of DLR’s about 4,000 customers, only around 25% are multi-market or multi-geography users on its platform.

We expect this to ramp up quickly – even in the midst of a global pandemic.

The aforementioned Equinix gives us a very specific “bread crumb path” of where this story can go. As of the end of Q2, 73% of its customers were using multiple regions:

DLR has presence in each of these regions too, particularly the U.S. and Europe. We look forward to seeing what it can do there, to say the least.

Interxion = The Crown Jewel of an Impressive Asset Set

Digital Realty’s first and foremost focus right now is successfully integrating Interxion’s assets, which – as mentioned – significantly increased its presence in Europe. DLR is now a major data center player on the continent, second only to Equinix.

Before the acquisition, its standalone growth rate was in the mid-single-digits. Interxion’s, however, was in the mid-teens, offering a major boost to its new owner.

Including Great Britain, Europe now accounts for about 29% of DLR’s consolidated revenue.

As-is, we estimate the continent is still 1.5 to 2 years behind the U.S. in cloud adoption and fiber deployment. But the gap is quickly closing judging by the attention the infrastructure-focused private-equity funds are giving this area.

Why does this matter? As we’ve seen in the US, those two factors are tangible leading indicators for data center demand.

With Interxion in the fold – including its CEO’s deep relationship with providers like Microsoft – DLR significantly enhanced its cloud on-ramp presence. The REIT now has almost a third of the market share for all cloud on-ramps in the EMEA region.

Its meaningful presence in Europe gives Digital Realty a significant competitive advantage through both new and acquired expansionary measures. Admittedly, both strategies present challenges, particularly outside of the U.S.

Fiber infrastructure and access to power are key tenets of growth. But they take much longer to implement in Europe than in the U.S. Just think of the age of many of those streets!

Then again, merger and acquisition targets are also harder to come by. So while players like CyrusOne (CONE) and QTS (QTS) have acquired assets there…

None have achieved the size and scale Interxion stood for, especially in the key Frankfurt, London, Amsterdam, and Paris markets, or other unique assets such as in Marseilles.

Data center bookings tend to be “lumpy” in nature, with weaker years typically following strong ones. That’s as the hyperscale players like Alphabet (GOOG), Facebook (FB), and Apple (AAPL) fill up/digest the space they take down.

So we expected 2020 to be robust given relatively modest 2019 hyperscale bookings.

Then Covid hit, bringing an enormous boom to data centers even while it cratered other businesses. Simply put, more data usage on networks drives more computing and storage needs. 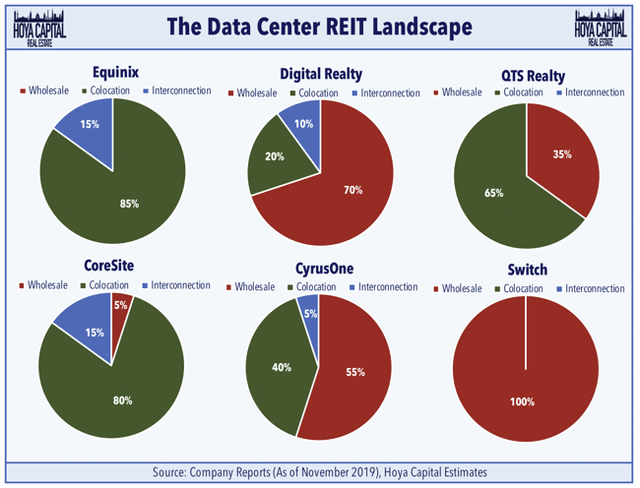 With that said, don’t be surprised if the law of large numbers takes effect in the second half of the year as these players digest their capacity from the first six months. This “lumpiness” is more apparent in the wholesale/hyperscale-only data center bent model.

As such, we favor names with a more diverse revenue mix – especially toward interconnection.

And, once again thanks to Interxion, DLR significantly increased its cross-connect exposure. In July, Cloudscene ranked Interxion as the leading connected data center provider in the EMEA region.

As of Q2, it had 160,000 cross connects. We estimate the contribution margins on this segment’s revenue is north of 85%.

Currently, it accounts for only about 9% of DLR’s total revenue. But the contribution to total profitability is more meaningful. And we expect it will continue growing, given Interxion’s strong relationship with cloud players and enterprises.

Earlier this year, DLR also acquired a 49% ownership interest in the Westin Building Exchange in Seattle, Washington – which represents the main interconnection hub for the Pacific Northwest.

This means a link between Canada, Alaska, and Asia along the Pacific Rim.

These acquisitions allow Digital Realty to pivot from being just a hyperscale player to more of a hybrid data center REIT with both wholesale and cross connect/co-lo offerings.

As hyperscale players, enterprises, and carriers’ needs evolve, DLR can now better support them than was possible just one year ago. With the rise of the hybrid cloud, these additional tools should bring the company deeper relationships among the cloud and carrier spaces.

Now, no conversation on Digital Realty can be complete without mentioning its balance sheet.

DLR continues to masterfully take advantage of both the low-interest rate environment and its investment-grade status. On September 14, it priced an offering of €750 million 1% guaranteed notes.

The company will use the proceeds to redeem debt priced 375 basis points (bps) higher. And though we acknowledge that rising rates don’t seem to be a near-term macro risk, it’s worth noting that DLR had a 0% floating rate debt and an average cost of debt of 3%.

Better yet, that latter figure will likely trend lower over the coming quarters.

As we already know, Equinix is the data center’s largest player, with a market cap of $67 billion. And DLR comes in with $38.8 billion.

The next largest player – CONE – has just $8.9 billion. So, in some ways, there’s EQIX and DLR. Then everyone else.

DLR has underperformed EQIX by 900 bps year-to-date. However, from a scale perspective, Digital Realty’s global footprint and reach is now on par.

From a dividend perspective, this company remains compelling. Its current 3.1% yield represents a 180 bps premium to that of EQIX. And it compares favorably with the average REIT… just with a whole lot more growth.

On a multiple basis, we estimate it’s trading at about a four turn discount to EQIX on an adjusted funds from operations (AFFO) multiple. EQIX does offer a higher growth rate in 2021 (about 9% versus around 7%)…

But this is more a function of DLR’s Interxion integration expenses, which we expect to be settled next year. Likewise, while EQIX’s interconnection roots offer a more tech-focused story, Digtal’s recent strategic moves seem underappreciated.

It’s time to let the tech light shine on them! 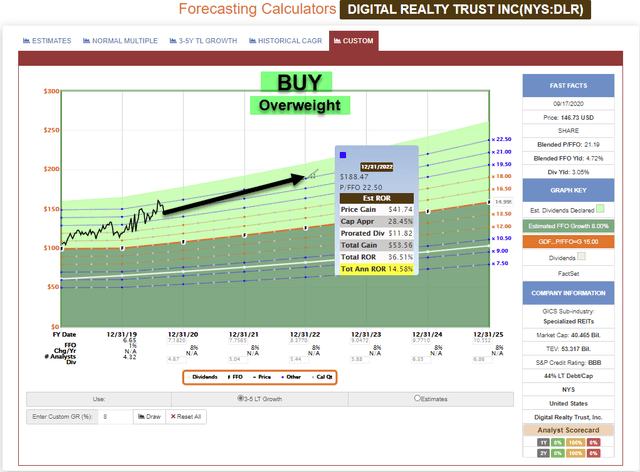 Digital Realty is the 3rd largest holding in the Durable Income Portfolio and shares have returned 22.3% annually (versus 6.4% annually for VNQ).

At iREIT, we’re committed to assisting investors navigate the REIT sector. As part of this commitment, we are launching our newest quality scoring tool called iREIT IQ. This automated model can be used for comparing the “moats” for over 150 equity REITs and screening based upon all traditional valuation metrics.

Disclosure: I am/we are long DLR, CONE, IRM. I wrote this article myself, and it expresses my own opinions. I am not receiving compensation for it (other than from Seeking Alpha). I have no business relationship with any company whose stock is mentioned in this article.