The dividend futures-based model we use to project the future for the S&P 500 (Index: SPX) presents some unique challenges from time to time.

In 2020, one of those challenges has been coping with changes in the model’s amplification factor (m), which, after more than a decade of holding a virtually constant value, suddenly became a variable. Add to that a bubble in stock prices inflated by a Japanese investment bank, and we’ve had our hands full in keeping up with the changes that have driven stock prices.

The unwinding of the one-sided trades launched by the Japanese investment bank’s “NASDAQ whale,” combined with statements by Federal Reserve officials on Wednesday and Thursday in the past week, however, provided us with an opportunity to calibrate the model and empirically determine the amplification factor. Assuming investors are continuing to focus on 2020-Q4 in setting current-day stock prices, it seems to have settled at a positive value of 1.0. 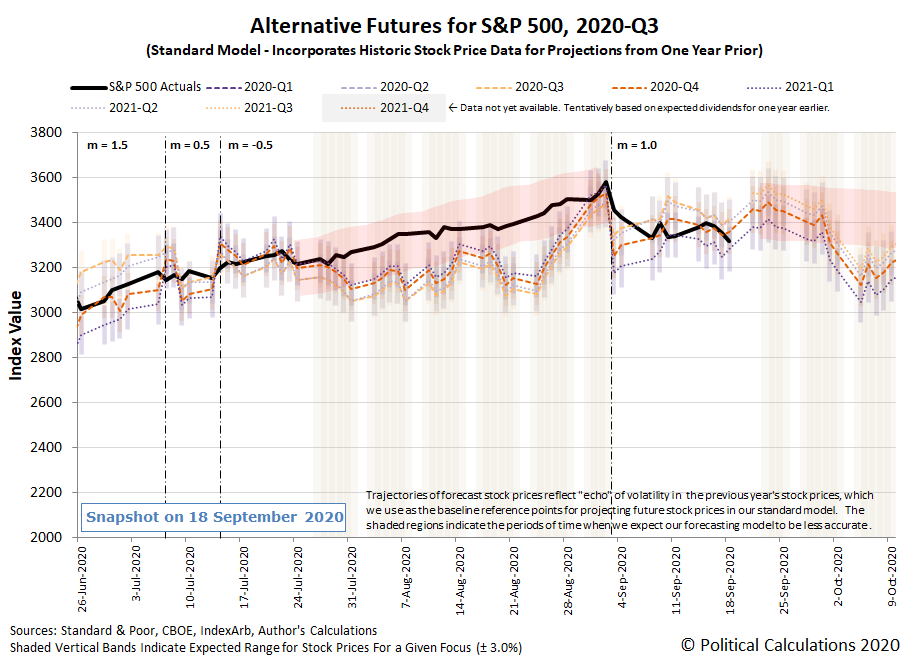 That’s less than the value of 1.5 that held in the period prior to the NASDAQ whale’s influence, where the reduction from this level is consistent with the Fed adopting a more expansionary monetary policy. Since nobody outside of Japan’s SoftBank (SFTBY) had visibility on its role in the summer stock price rally, we had previously attributed the run-up in the S&P 500 to investors responding the Fed’s signaling its increasing willingness to adopt a more “dovish” policy. Now that the NASDAQ whale is out of the picture, so to speak, we can now better quantify the contribution of the Fed’s signaled policy change to the summer rally, where it would appear to account for 25% of the change in the amplification factor.

This past week is when that signal was set more definitively, although as you’ll see in the headlines we plucked from the week’s major market-moving news stream, the Fed is still really shaky on what that new policy means.

Meanwhile, Barry Ritholtz succinctly summarized each of the positives and negatives he found in the past week’s economics and markets news.

Previous Post$1.3 TRILLION in dirty money may have been laundered through Deutsche Bank over two decadesNext PostDrug dealers turn to home delivery as social distancing bites