Two-thirds of the world’s population is unlikely to have easy access to any Covid-19 vaccine that needs to be stored at freezing temperatures, the German logistics giant Deutsche Post DHL has warned.

Research by DHL and consultancy firm McKinsey has found that insufficient “last mile” cooling facilities in the final delivery stages and a lack of storage at clinics in large parts of Africa, Asia and South America would “pose the biggest challenge” to delivering a vaccine at scale.

Existing “cold-chain” infrastructure, which allows for temperatures to be controlled throughout the delivery process, is only sufficient to bring a frozen vaccine to 2.5bn people in approximately 25 developed countries, the paper concluded.

“We can bring the stuff there . . . but in the end, when we have delivered it to the doctor, what happens once they open the package?” Katja Busch, DHL’s chief commercial officer, told the Financial Times. 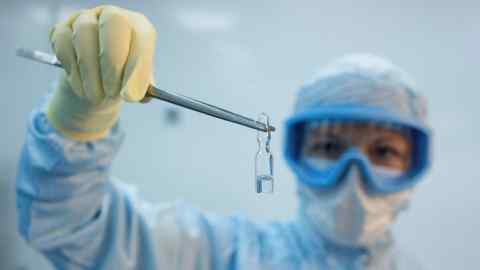 She added that the company was already in discussions with “some of the bigger governments” about solving such problems.

More than 170 Covid-19 vaccines are currently in development, according to the World Health Organization, and more than 30 of those have already proceeded to clinical trials.

A wide variety of models are being tried, but one in particular, which uses mRNA molecules, is likely to require freezing or very cold storage during transportation, the report said. Moderna and a partnership between BioNTech and Pfizer are developing mRNA vaccines.

However, distribution is likely to become easier as more is discovered about how a particular vaccine survives.

“I believe that upcoming stability data will support storage conditions that are not much different from any other vaccine,” said Ugur Sahin, the chief executive of BioNTech. As a “matter of caution”, early batches of a vaccine are shipped in frozen temperatures, he added.

“The more stability data the manufacturers get, the less complicated the temperature ranges will be,” Ms Busch said.

Vaccines that can be stored at between 2 and 8 degrees Celsius would allow for “more efficient distribution”, DHL said, although this would still increase the share of the world’s population reachable using current infrastructure to only 70 per cent, or around 5bn people.

The researchers also estimated that 15,000 flights would be needed to ensure global distribution of a vaccine over the next two years. Despite a reduction in freight capacity — thousands of passenger planes, which often carry cargo, remain grounded — Ms Busch said DHL was confident this would not be a problem.

“I strongly assume . . . that each and every commercial airline will raise their hand,” she said, to help deliver approved products.

Previous PostMagnite: A Less Expensive Bet In The CTV Space And Recovery In Advertising (NASDAQ:MGNI)Next PostA Dose Of Reality About The Labor Market